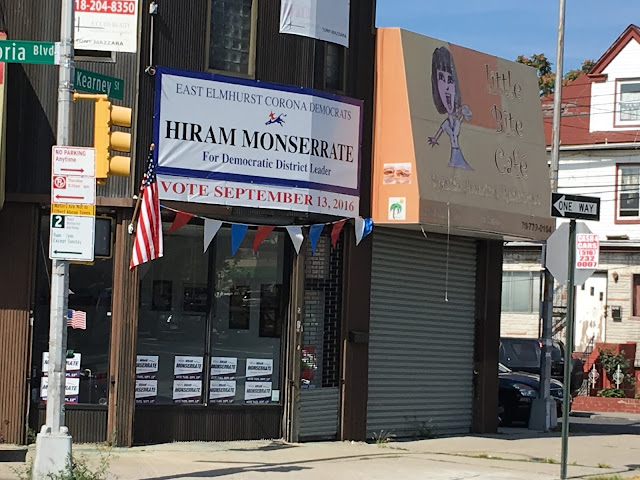 George
Posted by Queens Crapper at 7:04 AM

Because he's so dedicated to the citizenry and civic duties.

c'mon astoria, you can do better

Just another parasite that has no job skills for the real world. His only way to survive is to live off the public teat.

How did the political class fall so low?

And today there is a story on Anthony Weiner sexting with his baby in the bed next to him.

These people have no shame.

The best and the brightest of the Democrat Party right here!

No shame. On both sides.

He's Latino....and if he hoodwinks his compadres into believing that he's their saviour...si, bueno....he will get elected.
This is Queens...an uncivilized backwater territory of NYC where everything shady is possible.
Pass the hot sauce. They ran out of Vaseline. OUCH!

What does Hiram Monserrate tell a women with 2 black eyes ?
Nothing,he already told her Twice.
Monserrate,because Sharia should be the law.

I think his campaign office is and old women's battering center?

Hey don't knock Anthony Weiner, plenty of people have posted on this board that they would vote for him for Mayor in the next election.

Monserrate,because Sharia should be the law.

Will win because voters in Queens never learn a lesson.
Im told no government ID proving citizenship will be required to vote in these local elections ?
Is "election" even the correct word anymore ?

To add beating a spouse or girlfriend is normal in his culture so most his supporters dont even see this thug as a violent criminal.

He might be after aviverito's seat but i highly doubt he'll get that far.

Alas, Gary W, we don't have to knock Anthony Weiner any more--he's doing a fine job of sabotaging himself (and his already disgraced reputation).

Today, August 29, 2016 it was announced that Weiner was caught willfully installing himself in yet another 'sexting' scandal that was made only worse by Weiner's inclusion of his own young son, Jordan as a sidekick in the sexting photo, which resulted in the announcement that Weiner's very patient wife, Huma Abedin is finally leaving this 'sext' addict and public trust betrayer of epic fail.

As for the other Queens County elected fungi (all of whom ironically continue to treat their OWN subjects like mushrooms themselves--by keeping them in the dark and feeding them shit!), karma is about to catch up with them all--least of all a desperate little nugget like Monserrate--who still hasn't paid even one tenth of the restitution that he owes the taxpayers from when he was convicted and jailed for public fraud, lying under oath and battery and assault--despite that he receives $3,511 a month from his NYPD pension, but was making only token payments of $100 a month, until the U.S. probation department forced him to increase the payments to $350 a month!

Four years after his conviction, he paid less than $5,000 toward the $79,434.49 that he still owes--and, now he brazely thinks that he is district leader material. What a sad sack of shit--and, sadder still that he is far, far from alone!

Hence, the 50-year sleepwalk has ended for our politically hijacked, ravaged and tonsured borough of fed up and disgusted residents, and soon there will be a return to old fashioned activism, protest, rally and resistance, en masse, as the only effective way to exterminate all infected Queens, city council, assembly and senatorial vermin, whose appetites for hardly working on the public's dime is about to abruptly end--for these not so friendly robbers who continue to SO completely betray all pretense of public trust, ethics, integrity, accountability and transparency, that they now DEVALUE all honesty itself--to pathologically treasonous, traitorous and ruinous effect!

As of right now, these worthless, monstrously self serving, cradle-to-grave, party-machine-failed parasites are the greatest 'Welfare Queens' of them all!

Weiner has a D after his name so his type are never done.

Sadly, even texting a picture of your erection with your son on the bed next to you probably doesn't mean the end.

I heard a story about Monserrate. A friend who is involved in a legit charity said Monserrate approached them with a donation back when he was in office. He would make funds available to them if they would make a donation to his non profit in return. After he was told they don't work that way Monserrate and the grant went away.

>Hey don't knock Anthony Weiner, plenty of people have posted on this board that they would vote for him for Mayor in the next election.

Given how terribly DeBlasio is performing, I'm betting a lot of people are wishing he kept his Weiner in his pants.

I'm not thrilled with the idea of a sexting Mayor, it beats the heck out of a corrupt and incompetent one.

To the last Anonymous who said, ❝I'm not thrilled with the idea of a sexting Mayor (sic), it beats the heck out of a corrupt and incompentent one.❞

And, whenever anyone votes for mediocrity (and, hand-picked, rigged and put up candidates by the two-party-machine-failed system), the outcome is going to be more of the same endless trail of corruption, for whom everyone continues to pay a soul-crushing price.

'Big Bird' is just the latest of the intensely incompetent lot (he should have been impeached back in 2014!), but he won't be the last despicable asshole when so many continue to vote NOT according to an edict that demands ethics, honor, integrity, accountability and transparency, but one that enables more of the same graft, greed and corruption.

Anthony has pulled out his Wiener one to many times. He was a little deviant but with his kid next to him is really fucked up.

Who in the party is backing him?

In reply to Anonymous Number 11, I find it deeply disturbing how in the case of Hiram Monserrate, a U.S. probation department was able to 'force' him to increase his payments from $100 a month to $350 a month, yet higher Federal courts of Manhattan (with greater power and purview to determine decisions and order), have so far allowed serious criminals like Sheldon Silver and Dean Skelos to fragrantly abuse the system of law and order for which everyone else must abide, to not only delay their previously ordered jail sentences (as they've used and manipulated the law itself as an endless stall tactic to appeal their cases), but to also not pay millions up front that they willfully stole from every single taxpayer throughout New York City and New York State.

But, despite that Judge Caproni didn't give Silver a total pass (she specifically required him to begin paying toward part of a $1.75 million fine, with monthly minimum payments set at $5,846.00, which happens to be the exact amount of Silver's monthly pension checks, of which the first is due this coming Thursday, September 1st), it hardly absolves this convicted crook from holding on to millions that have been brazenly robbed and stolen from public coffers--and, worse, he gets to stay free until his appeals are heard--UNCONSCIONABLE, when men have been hanged for less!

Because of this pattern of avoidance (and costly, brainless stonewalling and subterfuge), both Brooklyn U.S. Attorney Robert Capers and Manhattan U.S. Attorney Preet Bharara have behun aggressively targeting pensions of convicted pols.

And, THIS BULLSHIT IS LEGAL???

What rock did he crawl out from under?

Add Dan Halloran to your list of Queens' morally corrupt.
At least our borough gets kudus for something.

That piece of shit has no shame---no surprise.

In Queens , most of the people who get elected to hold office , are those who cannot make a good living any other way.
Is that not true?
Look at the statistics.
Look at some of the family names that have been running their political dynasty traveling craps games for half a century.
Case closed!

P.S.
Dump Paul Vallone! There is one dynastic charlatan for you.