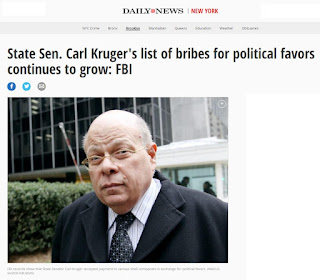 The way developer Harshad Patel recalls it, Brooklyn Sen. Carl Kruger offered to help him get a zoning change to turn his Sheepshead Bay hot-sheet hotel into apartments.

But it would cost him.

In the end, he said, nothing came of the zoning change, despite Kruger's involvement, and he sold the hotel.

"I wasted a lot of time and money on that," he said.

And the city is doing business with this individual because?
Posted by Queens Crapper at 7:04 AM

Now for the big prize...answer this question....how much did Lizzy and Marge get bribed?

All part of our national game of pay to play.
From the community boards in NYC to the White House in DC...PAY TO PLAY!
Put your hands together and let's hear it for the winning team, folks!

Rotten bastards. Crowley obviously got paid for this!

MOSS
You had one you'd know it. Patel.
They keep coming up. I don't know.
They like to talk to salesmen.
(pause)
They're lonely, something.
(pause)
They like to feel superior, I don't
know. Never bought a fucking thing.
You're sitting down "The Rio Rancho
this, the blah blah blah," "The
Mountain View--" "Oh yes. My
brother told me that..." They got a
grapevine. Fuckin' Indians, George.
Not my cup of tea. Speaking of
which I want to tell you something:
(pause)
I never got a cup of tea with them.
You see them in the restaurants. A
supercilious race. What is this
look on their face all the time? I
don't know.
(pause)
I don't know. Their broads all
look like they just got fucked with
a dead cat, I don't know.
(pause)
I don't know. I don't like it.
Christ...

NY Politicians are just one step away from advertising Thier for sale on Craigslist unlike Washington where they openly advertise to buy your vote with section 8,EBT Cards and free medical insurance

Once you own a politician it's better than having an uncle in the mafia.

"And the city is doing business with this individual because?"

Sen. Carl Kruger did not specifically receive or accept any moneys.

No charges filed, no conviction.

Just as Hillery Diane Rodham Clinton did not personally receive anything.
However her so called money laundering charity and her husband received "speaking fees".

>And the city is doing business with this individual because?

Gee, I dunno, why would the city be doing business with someone who regularly bribes politicians?

Actually you need the head of the FBI in your corner to mover along, a luxury not many can dream about.

Stop making fun of our next president

The McDonald decision by the supreme court has ratified the legality of this once although poorly prosecuted criminal behaviour.

The city, state and country has become a veritable executive privilege on shore bank account for the soulless elected officials and those campaigning for them. The oligarchs and plutocrats have basically taken over the nation.

When the day of reckoning comes, they assume they all will be safe in their gated homes, summer houses, galas, parties and other various events. Since the laws they made absolve them of anything so they can be free of even morality and having a conscience, and the police have to protect them from the disgruntled masses no matter what, for they are our leaders and they know what's best for everyone. And progress can only be made if they reap mass profits from anything.

you ever notice how it's non Americans who own these hotels? Pakistani's seems to own a lot of the them. Remember the infamous Martinque Welfare Hotel on West 33rd Street That was owned by Pakistani's too? I wonder if it's the same owner.

JQ LLC said...
"The McDonald decision by the supreme court has ratified the legality of this once although poorly prosecuted criminal behaviour."

Wasn't McDonald (v. City of Chicago) about the second amendment? What has this got to do with bribery and this behaviour in the neighbourhood? From the U.K. are we, mate?


"When the day of reckoning comes, they assume they all will be safe in their gated homes, summer houses, galas, parties and other various events."

Well then Spartacus old chap, in that case, that McDonald decision should come in rather useful. Although it's doubtful the serfs will go to those lengths seeing as how they keep re-electing the same masters over and over again no matter how much they bitch and complain about them.

this is the kind of dirtbag that de Blasio and his cronies are giving out hard earned tax money to.

Apologies to all and Thanks for correcting me and using bold font cav, it's the McDonnell decision. Crikey!

I believe this needs to be investigated. How can Patel receive any NYC deals with any city agencies after admitting he paid money . Corruption!! And Deblasio and DHS is part of it.

Another thing cav, my spell check function is acting all limey for some reason too. I don't usually fancy writing like that.

Hopefully my next smartphone will have a kind of brexit function.

cheers, cav. be seeing you at the bespoke coffee house on 102 and atlantic for a spot of tea.