Far Rockaway revamp may be in the cards 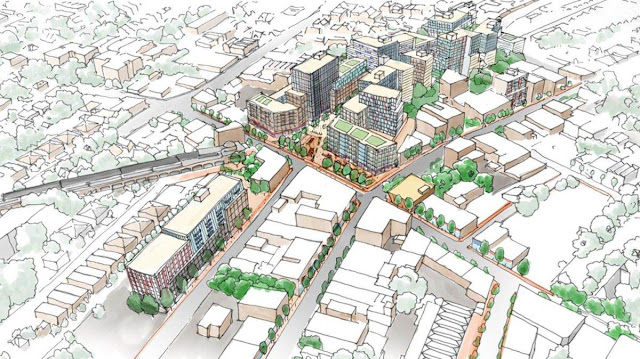 The long-neglected downtown commercial hub of Far Rockaway could become a gleaming, vibrant village under a plan that will be unveiled Friday, the Daily News has learned.

That scenario is worlds away from the current state of Mott Ave., with its rundown stores anchored by a shopping center that has sat mostly empty for decades.

City officials said they are prepared to rezone the neighborhood and even create an urban renewal area if that’s what it takes to revive abandoned and blighted private properties.

“The Roadmap for Action will unlock the downtown’s full potential as a vibrant, mixed-use neighborhood,” said Maria Torres-Springer, president and CEO of the city’s Economic Development Corp.

I'd like to think that the city will finally do something to improve Far Rockaway, but if it involves the EDC and "upzoning" then it's probably a recipe for disaster. (See Jamaica) And they used the V word, so you know this plan has gotta be full of crap.
Posted by Queens Crapper at 8:18 AM

It ain't gonna help. Everything has been tried to rescue this long forgotten spit of Queens.

Should nock it all down and build bungalows !

I wonder who will wind up with the biggest pay off? Where would the scum that made Far Rockaway the dump it is go? There are already too many looters who were relocated after Hurricane Sandy. Far Rockaway did not get as much damage as the rest of the peninsula. But they got the most FEMA money, most HRA money and money from any and all agencies.

there's solid reasons why the properties are blighted and abandoned. You should have been there after the hurricane. This is where people are too afraid to walk their dogs because they are stolen at gunpoint and sold on Craigslist.

I grew up in FarRockaway and they re bilt it in the 1960's(after the NYCTA pushed the A train across the Bay.....it was turned into a slum and nomatter how much makeup you put on a pig its still a pig,you have to change the population and I mean no more welfare hotels.....it was once a great place and middle class,welfare in the early 60's(along with the subway ride for the welfare population).....could not wait to leave then they closed FarRockaway HS and the hospitals....a slum with a ocean view!!!!!!!!!!!!!!
Sunday 8/21/16

I, too, grew up in Far Rockaway and at that time it was a vibrant community including the downtown shopping center. We can thank John Lindsay and Simeon Golar for its demise. Those two also considered themselves to be "progressive."