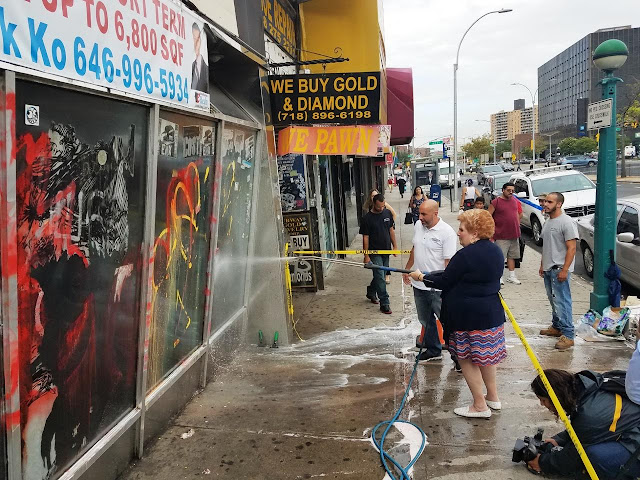 "Charley, when I'm done with the wall, stick the spray up my skirt."

When the strip club wiggles turned to queens Blvd scribbles

Estelle Castanza begins day one of her graffiti prevention initiative.

"I am running for reelection so I need an updated photo op picture for my constituents who don't know what I do in City Council." " Please reelect me."

"See, I do care about the community."

I need a photo op but I don't want to go out in my district, let's do it downstairs in front of the office so I can come back up and not delay my lunchtime.

Let me see if this thing is powerful enough to wash the clown make-up from my face.

That graffiiti has been there for 10 years !!

photo op?
where's Dizzy Lizzy?
she must be busy helping the homeless!

Sign should read "We buy Gold, Diamond, and Bullshit."

Now, I was all ready to pound out some fresh jabs, quips and well deserved zingers for 'Double K's Queens Funhouse (and her double wide Queens hide!), but the sharp-tongued and quick-fingered Queens Crappers beat me to ALL of the very best punchlines--and, with record speed!

How this Jurassic Park fossil can show her dinosaur face anywhere, much less in Queens County (the borough that she conveniently forgot to serve, but ironically didn't forget to accept her 32% pay bump!), is a testatment to what phantom leadership looks like--and, with Dizzy Lizzy's dynastic lair of lackeys just down the road, it's one big, taxpayer funded, 'Yuppie Fantasia' for all city council crud, where the obscene tab is always paid for by the REAL, 'overworked-and-vastly-underpaid' rank and file--and, apparently always will be--peasants be damned!

I haven't played with a hose in years.

This ketchup & mustard must wash off so easily.

Another Queens County DEM.PROG. hose job.
LOCK THEM UP!

He must have very bad eyesight if he's trying to upskirt her! Liz Crowley, maybe. But Karen "The Joker" Koslowitz? Give me a break.

How this Jurassic Park fossil can show her dinosaur face anywhere, much less in Queens County (the borough that she conveniently forgot to serve, but ironically didn't forget to accept her 32% pay bump!)...

If you didn't know, and I hate to be the one to tell you, but, as posted on QC a few years ago, Koslowitz is a double-dipper, taking both her City Council salary and her NYC pension from her previous city jobs. So she's earning two salaries and not doing anything.

Anonymous Borough Hall said...
The woman looks like the Hindenburg.

So this is what a penis can do?

To the Anonymous who pointed out Karen Koslowitz's double dipping, city pension collecting scam. I no longer worry about what's illegal (or, death itself for that matter!), but I am always deeply troubled and angered over what is STILL legal!

Koslowitz is yet another failed politician-pig at the public trough--shoving her fat, ugly snout as deeply as her feeding frenzy will permit--and, the public be eternally duped, bilked, scammed and damned! Men have been hanged for less!

What a stream!
I did not know that Karen could still piss that far at her age.
Aaah....she's a seasoned pro.
She's had lots of practice pissing all over her constituents for years.

And, this nasty pig took an oath of office to serve and protect her constituents. Likewise, Borough President Melinda Katz, not to mention every other publicly elected position throughout the City and State of New York--and, yet they willfully abrogate their contract daily, as they brazenly continue to OPENLY PRACTICE corruption, graft and greed that never ends, for which their languishing subjects continue to pay a soul-crushing price!

And, that's why lawlessness, vigilantism and outright anarchy are on the rise, when the source of all lawlessness and corruption is aggressively maintained without consequence by City Hall bureaucrats and Albany henchmen--and, the public be damned!

Is the caption contest still on?

This power washer will do a swift job cleaning out my dingleberries.

Wow, Ronald McDonald is much more portly looking than in real life. He's not photogenic at all is he? He looks like a 75 year old jewish lady looking in a store window. Where's all the kids? What's he doing spraying water on that building? Is he performing one of his pranks? Oh Boy, now I'm hungry.

This really a commercial for one of those collapsing pocket hoses you see advertised on TV.
Karen should carry one to make it easier hosing her constituents.

And, the collapsing pocket hose, Anonymous, is merely a metaphor for how Queens County itself has already collapsed (from the crushing weight of all grindingpolitical corruption, graft and endless greed), where the entire borough needs a steam bath, followerd by a fresh paint job!

Actually, the hose is spraying in the opposite direction--it's feeding time at the zoo for this 'dead weight' elephant for whom bath time desperately awaits!