The shelter "service provider" for the Maspeth Holiday Inn is Acacia Network.
If you're opposed to the shelter in Maspeth then you need to read the following very carefully, because Mayor de Blasio will be sending this your way in less than 60 days. 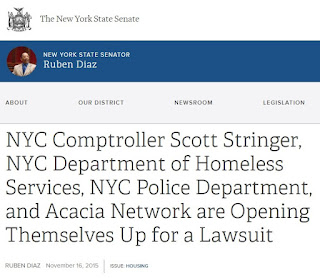 You should know that this past Friday, November 13, 2015, a woman who resides at the homeless shelter located at 941 Intervale Avenue, Bronx, New York, was reportedly stabbed by a resident of the same shelter. The shelter, which is run by Acacia Network is across the street, right in front of my District Office.

According to reports and statements people have given me, the perpetrator was caught on tape breaking the security cameras in the homeless shelter during the weekend (November 7 - 8) before Friday’s stabbing.

The assailant’s vandalism did not come to Acacia’s attention until Monday, November 9, because no one on Acacia’s staff took a look at the cameras over the weekend. On Tuesday, November 10th, Acacia’s staff reported the destroyed cameras to the police, providing copies of the video tapes to the 41st Precinct, with footage of the suspect smashing the security cameras.

Even though Acacia gave this information to the police, the perpetrator was not questioned or arrested until after Friday’s stabbing took place.

In March, the Department of Investigation issued a blistering report about odious conditions at cluster sites citywide, including at facilities run by two of the organizations soon to win new contracts, Acacia Network and Bushwick Economic Development Corp., known as BEDCO.

“At the time of the inspection, one elevator was broken and stuck on the sixth floor,” the report said of an Acacia site. “The other had a large puddle of urine on the floor.” It noted a broken window with glass strewn across the hallway of the facility for homeless families.

The poor conditions have been corrected, Acacia said in a statement. 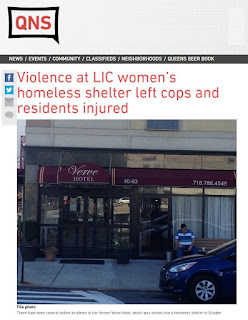 On Feb. 11, police responded to a call of a dispute among shelter roommates. A woman struck her roommate with a metal object and was placed under arrest, Fortune said.

Officers brought her to Weill Cornell Medical Center, the medical school at Cornell University, to be treated. While police were escorting the woman out of the ambulance, Fortune said, she became “very aggressive” and headbutted an officer, who sustained minor injuries.

Because the woman was arrested, police were responsible for watching her until she was released, he said. The next day, the patient became aggressive again and hit an officer with a metal IV pole and kicked him several times.

Police were called to the shelter again on Feb. 12 when a resident who refused to go through the metal detector broke the device. She then proceeded to throw chairs and soda bottles in the lobby. The woman was arrested and transported to Weill Cornell Medicine for a psychiatric evaluation.

Fortune also added that police have had to respond to calls of residents trying to hurt themselves and a chronic 911 call from someone who has repeatedly reported that a woman was stabbed inside the shelter. The precinct has also received complaints of women harassing store owners in the area.

District Manager Florence Koulouris, who attends monthly community advisory meetings with staff at the shelter, said there have also been issues with “aggressive panhandling.” Some women at the shelter frequently steal from a local pharmacy and businesses in the area, she said. Acacia Network, the service providers for the shelter, said its security staff would do roving car patrols to monitor the women when they are out of the shelter but have not been doing an adequate job, according to Koulouris.

“The problem is we’ve been getting a lot of excuses [from Acacia Network] because [they always say] there are problems with the vehicle, the vehicle is in the shop,” Koulouris said. “Supposedly they’re using private unmarked cars for this which is completely unacceptable because the patients of The Verve … they don’t see the cars. Their awareness is down and they tend to act inappropriate.”

Fortune said he has been in contact with Acacia Network to discuss the two recent violent incidents, which they were unaware of. 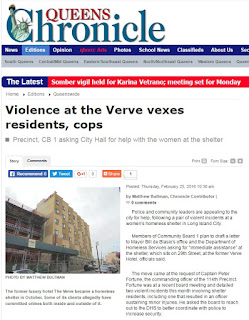 From the Queens Chronicle

“The reports from the 114th Precinct are disconcerting,” City Council Majority Leader Jimmy Van Bramer (D-Sunnyside) said in a statement. “I have voiced my concerns about the shelter to the Department of Homeless Services and the Administration.”

Van Bramer added he was particularly troubled by reports that the provider of services at the shelter, Acacia Network, had not been doing adequate neighborhood patrols.

“The Administration has confirmed to my office that they will be adding additional security officers at the Verve shelter,” he said.

Not long after the shelter opened, officials acknowledged some concerns had been raised about overcrowding and residents loitering outside the building. But local business owners have also complained that residents have been harassing them and causing disturbances.

Jeff Franco, who works at the nearby LIC Deli & Grocery, said there have been instances of the women fighting, panhandling and stealing from the store. Those sorts of things can make others in the neighborhood, including tourists staying in hotels, hesitant to shop there, he said.

“Your business goes down because people don’t feel like coming here,” he said.

Ali, who works at the Saz Deli & Grocery on 31st Street but declined to give his last name, said he had called police on more than one occasion after incidents involving women from the shelter.

“They give me too much of a hard time,” he said.

According to Koulouris, Acacia is supposed to conduct neighborhood patrols in a marked car. But the service provider has said recently the car was out of service and it was instead doing patrols in private, unmarked vehicles.

Koulouris called that “unacceptable” and said there should be a visible security presence in the community. On a recent Saturday, a white SUV marked Sera Security could be seen outside the shelter.

Nevertheless, Koulouris said, Acacia made a promise to take care of its clients and be a good neighbor in the community.

“Right now, Acacia is not being a good neighbor,” she said. 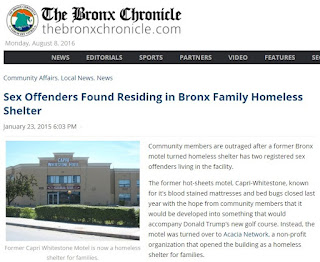 From the Bronx Chronicle:

The former hot-sheets motel, Capri-Whitestone, known for it’s blood stained mattresses and bed bugs closed last year with the hope from community members that it would be developed into something that would accompany Donald Trump’s new golf course. Instead, the motel was turned over to Acacia Network, a non-profit organization that opened the building as a homeless shelter for families.

However, there are currently two registered sex offenders, Curtis Bolden and James Bryant who are listed as living at the shelter.

According to the NY State Division of Criminal Justice website (a publicly accessible website), Curtis Bolden was convicted in 1980 for raping two women. James Bryant was convicted in 2004 for aggressive sexual assault of a 7 year old child. Bolden is listed a level 3 offender while Bryant is a level 2 offender.

Why does the de Blasio administration insist on entering into contracts with a provider that has a documented terrible history? Who else out there can totally fail at their work and get rewarded with more work?
Posted by Queens Crapper at 12:41 AM

These are just isolated incidents.

Dump it in Maspeth. Nobody cares.
In an isolated corner of Queens, who will take notice?
THE RESIDENTS OF MASPETH, THAT IS WHO!
LET IT COST EVERY POLITICIAN BEHIND THIS THEIR JOBS!

This is what happens when we close mental institutions. Many of the homeless are homeless because they have problems. Giving them a bed for a night won't change anything. We need to have the institutions so that people can get help and not be out threatening the public.

Excellent reporting. People need to know the ugly facts. Crowley's will have blood on their hands after the first death at this dump.

I would never want to spend a night in a homeless shelter But I wouldn't mind owning one,with all the money they throw at them I'd support any crooked politicians and kick back some money under the table to my new friends,America is not a country it's a business
Stronger
Together
Democratic

Will the Queens Cheerleader Ms Katz be commenting on any of this? I wonder. I really wonder.

Big Brother can be very lazy1

2 things to note about Billie Biggs: 1)The ACLU has done more damage in this country than any foreign enemy 2)Billie Biggs was from NJ and should have been sent back

Look at the low life scum they hire at this place. Fake case managers with no education and security guards from third world countries. shut it down. shut them all down re open the mental hospitals.

https://www.thenation.com/article/nycs-disappearing-neighborhood-hospitals/
(it's a good and thorough article, despite the hideous,opportunistic and now prophetic photo op on top)

Maspeth is for burials