Ah, the magic of Facebook. From it I found out that the civic organization COMET had the following exchange with Mayor de Blasio's people:

"I asked where these "homeless" couples are living now and was told they are in shelters around the city. The representative from Intergovernmental Affairs [Lincoln Restler] alleged that many of these couples formerly lived in addresses within Community Board 5 (Maspeth, Middle Village, Ridgewood, Glendale, Woodside)."

Now if they're already sheltered, why do they need a different shelter?

Facebook also provided the following stats from a FOIL of DHS records done in 2014:

This 4-family house at 60-90 Flushing Avenue in Maspeth has been vacant for years. It's owned by the City of New York. If it were fixed up, all of CB5's homeless could be housed. But the city would rather leave it in this condition and shovel money to millionaire hotel developers while citing the "fairness" doctrine, which to a neoliberal means to take decent neighborhoods and knock them down a peg while gentrifying poor areas to benefit the 1%. 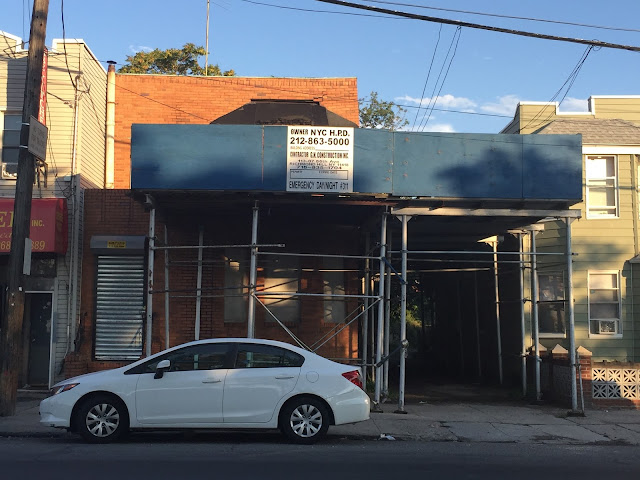 "I was told that if the community could come up with an alternate site with a quick turnaround, within 30 days, they may reconsider this location. A "quick turnaround" means ready to move in with minimal to no construction."...This is like asking 'would you rather die by a firing squad or by a guillotine'. How about moving some homeless into DeBlasio's house in Brooklyn? Oh,wait, he's going to need it soon when he gets kicked out of office.

We need capsule hotels with single sleeping pods. It would be more cost effective an allow for the homeless to be off the street at night.

ah, why didn't your community's politicians do this?

is providing employment opportunities and tweeding opportunities more important for their career than the interests of their hapless community?

We need more deportation. Send the homeless back to their own state or country of origin. Most of the problem would then be solved! Also, if we deported like we should be, we could free up more housing for our own citizens to live in. It's not rocket science.

Dont slam the people the system let in here - slam the system for exploiting people from the immigrants, the poor and most importantly, constituents whose interests is being ignored.

The people that caused this are your politicians. And until you do something about them, you are wasting your time.

You know what's happening here with this shuffling of the homeless. Gerrymandering.

They are gerrymandering the homeless to devalue and overvalue property values in certain towns.

Curious. Since the genesis plan for De Faustio's affordable development rezoning projects is for East New York, I wonder how many shelters have been opened there in the past 6 months and if there is any plan to build or open one in the near future.

JQ LLC please read below for the real story of "equality"

Obama collecting personal data for a secret race database - all for the purpose of “racial and economic justice.”

the most Orwellian of these new government surveillance programs is the Affirmatively Furthering Fair Housing database. It charts neighborhoods by racial groupings to identify the ones that need rebalancing. It is an effort to diversify America’s wealthier neighborhoods.

Crappy, can you link to where you got those DHS docs?