Explosion in number of homeless shelters in Queens

Well folks, you couldn't have come to this site over the last week or so and not have been informed that there is a shelter proposed for the Holiday Inn in Maspeth and a meeting about it was held last night. I am still sorting through all the videos and photos that were sent to me so I can report on this correctly instead of the way the media did. I can say that Maspeth did a GREAT job in standing up for themselves. So please bear with me.

In the meantime it has been brought to my attention that 3 more are opening or have opened around the borough (and that's just the ones I found out about)...

Meanwhile, the city has quietly moved 37 homeless families into a nearby Quality Inn in Woodside — despite Mayor de Blasio’s vow to phase out the use of hotel rooms to house homeless families.

The 37 families have been there since June, officials confirmed, and the city is providing full-time security and services for the families.

Councilman Jimmy Van Bramer (D-Queens) said local officials were never notified of the move — and he was particularly upset to be left in the dark because he’s worked with the city to welcome other shelters in the neighborhood and avoid protests. 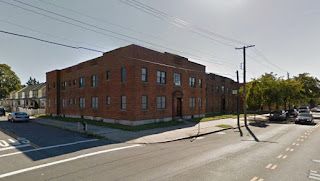 "Since this opened earlier this year, the unemployed residents are seen wondering aimlessly around the streets and hanging out on the steps of the buildings at all hours. An assortment of shabby looking women are regularly seen hanging around the complex.

We asked for affordable housing and services for our seniors, but, DeBlasio ignored the pleas of the locals who voted for him and saddled us with more homeless housing." 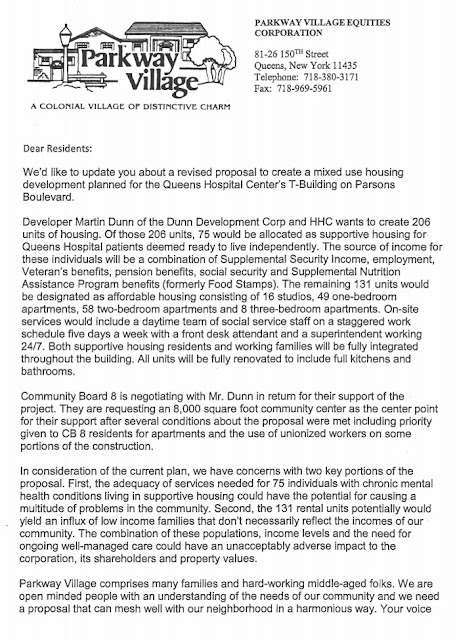 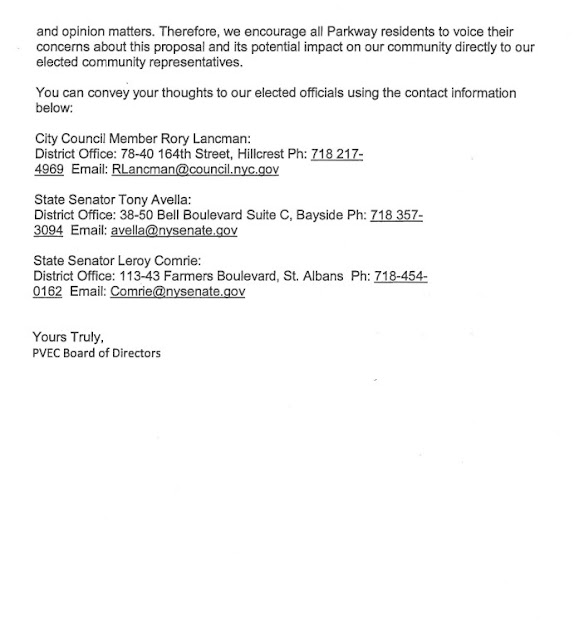 It sounds like "supportive housing" is the new name fauxgressives have chosen for "homeless shelter".
Posted by Queens Crapper at 12:41 AM

The meeting was packed to the rafters, a line around the block, people ultimately turned away.

There was a lot of good information presented, and an incredible show of force from a united community peaceably protesting.

The powers that be will do whatever the hell they want!

You voted for these people, you chose a ONE PARTY SYSTEM, so you get the government you deserve...

"Supportive housing" is the new name for institutionalization (notice this case is for transfer patients)... Gotta love it: they sugar-coat the forthcoming ILLEGAL concentration of people with severe psych problems with "AFFORDABLE HOUSING" - we just went through this in my area. I believe that every American should have a place to stay, and everyone who needs support should get (real!) support - yeah, I'm one of those wimpy liberals. However, I also firmly believe that concentrating these populations is done solely to increase the profit margin for the Agency/entity operating the facility. This is not right for the individuals in the community OR the people being served. It is also contrary to State and Federal treatment paradigms (the so-called Recovery approach).

Pix news showed footage of the maspeth town hall and only showed one clip of a guy yelling and trying to rile the crowd up. I know his intention was to motivate and it is hard to suppress your rage when officials are implementing and imposing horrible plans around your town, but it looked like pix was trying to portray the citizens there like lunatic fringe tea partiers. The thing is PIX has done practically no reporting on the various scandals surrounding Mayor De Faustio

These are the folks that madame quinn tells to deal with it.

The gentrification industrial complex is playing a demented and twisted game of divide and conquer with home owners, renters and the homeless. This may be the final straw for this corrupt administration.

the delightful thing is that it took this site to do it.

I was the first yeller on the news clip. Some outlets will misrepresent but so be it. I hope that the lawsuit will focus on the fraud of moving people into the zip code and turning them out so that they will be listed with that "last address". They are giving us a month to come with a plan that they've been working on for years. So be it. Maspeth is America.

The First amendment as adopted in 1791
"Congress shall make no law respecting an establishment of religion, or prohibiting the free exercise thereof; or abridging the freedom of speech, or of the press; or the right of the people peaceably to assemble, and to petition the Government for a redress of grievances."

The founders intended the press to be the guardians of Freedom and keep the populace informed of the misdeeds of the political class. The liberal press and so called journalists are the new Praetorian Guard of the elite political class.

These manipulators of media overwhelm us with useless celebrity gossip, a flood of irrelevant social media, and nonsensical games to distract us from the true on-goings in our community, the nation and around the globe. We are all working endlessly to pay for a lifestyle we are all told is what we want. Our youth spends most days in government indoctrination camps being groomed to be the next "journalist" or political interns destined to save the world, when they are just as Vladimir Lenin and Joseph Stalin said "useful idiots".

And we wonder why no one is paying attention...

look at the bright side, crack sales in the neighborhood will skyrocket.


Woodside was a decent area at one time, but now it's another high priced slum.

THIS IS OUT OF FUCKING CONTROL. I HATE CUOMO, BUT SOMEONE HAS TO STEP IN AND PREVENT QUEENS FROM BECOMING THE SKID ROW OF THE EAST!!

>You voted for these people, you chose a ONE PARTY SYSTEM, so you get the government you deserve...

Queens didn't vote for DiBlasio. That's why we're getting the shaft.


The people in the audience yelling are some uncivilized people. Can't they find anyone to interview that sounds at least like they went to college?

The media, and loud yelling people, really love each other (one for the ratings, the other for the venting). I ask this though: when your own reps give you the shaft and no one is listening to your very legitimate concerns, what else are you suppose to do? No one would be yelling if this shelter wasn't literally being shoved down the communities throat without any notice.

In the longer term, getting the Crowley's out of office would help.

WPIX, WABC, WNBC,WNYW, WCBS ONLY CARE ABOUT RATINGD. ONLY THE NY POST REPORTS ON THIS STORY.

Anonymous said...
>You voted for these people, you chose a ONE PARTY SYSTEM, so you get the government you deserve...

"Queens didn't vote for DiBlasio. That's why we're getting the shaft."


This is much, much more than the Mayors office!
I realize that the current mayor of The City of New York was voted in with a historically low turnout. He is but one person and only a piece of the puzzle.

The New York City Council has 52 members, 3 republicans, 2 of which are from Richmond County that many do not even consider part of The City of New York and the other ONE from Queens County.

We are talking 3 out of 52 for the City and One out of 14 for the Borough of Queens.

The New York City congressional delegation is comprised of 11 Congressmen, and imagine that, the representative from Richmond County is a Republican, According to my math, that is an ELEVEN to ONE ration For the entire City and ONE HUNDRED PERCENT DEMOCRATIC for the Borough of Queens.

The New York City State Assembly delegation is comprised of 65 Assembly members, 64 of which are alive and one former democratic member who unfortunately dead, but most likely still voting. That is by my estimates, ONE HUNDRED PERCENT DEMOCRATIC AFFILIATION.

The New York City State Senate delegation is comprised of 25 State Senate members, of which there are TWO republicans and one Democrat caucusing with the Republicans. That is 2-1/2 out of 25. The Borough of Queens has 7 State Senators - All Democrats.

We have TWO Democratic Senators, can you say ONE HUNDRED PERCENT DEMOCRAT?

Last But not least, our Governor.

There is NO opportunity for any opposition

You got the government you deserve...

Three more suckers being built not to far from Maspeth in Fresh Meadows. Two located in the westbound Horace Harding Svc road on what was a former shopping center and movie theater between 182 and 183rd street, and one across the L.I.E on 186th street between the Horace Harding Expressway and 64th avenue. These properties which were vacant for years were sold when down zoning began in the community. What these sneak developers did was dig and pour concrete before the down zoning took place so that they were grandfathered into the original high density zoning. All of a sudden without warning 3 hotels sprung up without warning behind the existing low density neighborhood. The hotel on 186th street built by the May Flower group is on what was formerly 4 single family homes and was built on the middle of the block with only one and two family homes. This was purposely planned to change the zoning so that anything bordering the L.I.E one block in along this section wiil now allow high density buildings. I have contacted local elected official for this district with no response or explanation. Fresh Meadows is not or ever has been or will be a tourist destination to have not only one or two but three hotels built next to each other and a few blocks away!!! The first thing I thought was that they will be used by hookers and eventually turned into Shelters and then good luck trying to sell your house within a mile of them. In this case hopefully wealthy Asians visit them when traveling overseas to see family that has saturated the area. Hopefully some hot Asian women that are looking for a white boy like me.

>Hopefully some hot Asian women that are looking for a white boy like me.

They are if you can afford them.