How feasible is the Sunnyside Railyard plan? 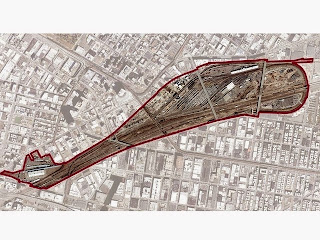 Councilman Jimmy Van Bramer, whose district encompasses the entirety of the rail yard, has vowed to block any proposal for a convention center or high-rise housing in the portion of the yard adjacent to landmarked neighborhood Sunnyside Gardens.

"There have been lots of proposals on developing the yard over the years," he said. "And every time it comes up, folks in the neighborhood get frightened about the prospect of massive development."

And then there's the small matter of timing. In his State of the City speech last week, the mayor talked of putting 11,250 below-market apartments at Sunnyside Yards, the same number built in 1947 at Stuyvesant Town and Peter Cooper Village in Manhattan. But experts doubt that Mr. de Blasio will even be around to count those units toward his ultimate goal of building or preserving 200,000 affordable apartments during the next decade. Decking over the rail yard, even a small portion of it, is expected to be a multidecade project—one with financially unfortunate timing.

"It's a 30-year project where probably 50% of the costs will be incurred in the first five years," said Seth Pinsky, a former CEO of the city's Economic Development Corp., now an executive vice president at developer RXR Realty. "It's decking, it's sewers, it's electricity. There's nothing there. You're building from scratch."

No wonder the mayor's office acknowledges that any housing built at Sunnyside Yards will likely become available after the conclusion of Mr. de Blasio's affordable-housing plan. Nonetheless, it now looks likely that at some point, with the city's blessing — if not cash — housing will blossom on the site. It's a possibility rich in irony.

Hey folks, as we recall, Mr. Van Bramer thinks that warehousing homeless people is a great idea. He's also agreed with every major "affordable housing" overdevelopment push except this one. Why? Only because he lives there. Anyway, I wouldn't be too worried about this silly folly happening during the lifetime of anyone alive today.
Posted by Queens Crapper at 12:14 AM

Will never happen in most of our lifetime. The maintenance of such a development alone would render it too costly. If affordable for a one bedroom today is $1,200, by the time this project is finished in 2040, it would probably cost 10times that amount to live there. The mayor needs to start taking his meds again!

Another white elephant to keep the discussion from the poor economy, the back room deals for construction and the payoffs needed to build anything in this city.

As feasible a concept as Jimmy Van Bramer being honest. This guy has bent over for developers in exchange for their campaign contributions. He is safely ensconced in his Sunnside Gardens historic district abode and does not give a crap about what happens elsewhere. Of course he doesn't like decking the Sunnyside yards for development in this case. It is too close to his home. Well, FU Jimmy! Hope your chickens come home to roost.

This is all bulls*t! The thought of having these scumbag yuppies make me want to vomit. The overedevelopment of LIC already brings gentrification crap- lack of infrastructure, strainin of the transportation system, dog shit everywhere or poop bags littered on the ground and pretentious tower people. And no - nothing is affordable anymore.