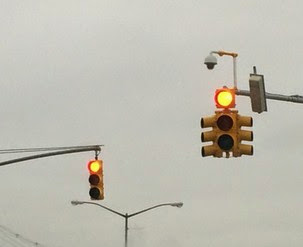 Motorists driving along Cross Bay and Woodhaven boulevards will be seeing more red, yellow and green.

As part of Mayor de Blasio’s “Vision Zero” traffic safety initiative, the city is in the process of installing new and larger traffic lights along the busy thoroughfares in hopes of giving motorists a better view of the of the red, yellow and green lights.

Work will be done for the entire length of the corridor and is expected to be completed within four to six weeks, weather permitting, according to a DOT spokeswomen.

I don't think the issue is lack of visibility of signals. On the contrary, when dopes see the light about to turn red, they speed up instead of slow down.

And Mike DenDekker has a point: none of this is necessary, he told DNA Info.

The city’s Vision Zero program does “nothing” to help keep pedestrians safe — and couldn’t have saved two children who were tragically killed on Northern Boulevard in recent years, according to Assemblyman Michael DenDekker.

Instead, the city should spend money on a traffic light system that allows drivers and pedestrians to travel separately because those accidents were attributable to vehicles failing to yield while they were turning, he said.
Posted by Queens Crapper at 12:17 AM

I thought that smaller traffic lights were in style to discourage a 'drag race' feel. (Queens Blvd for example)

Now how about repainting worn pavement markings( and put some better reflective media in it), replace missing signs and fix streetlights. Speaking of streetlights: when dot installs those nice bright LED's, aim them properly so you don't blind drivers because they are angled at oncoming traffic!!

Don't be dissuaded by common sense, Crapper. We need more highly-flanagled expensively-procured-and-even-more-expensively-maintained gadgetry on all municipal buildings, vehicles, spaces, people, poles, pencils, and clipboards to save people the dangerous aggravations of both cognition and rational thought. What are you, some kind of caveman? We need more departments, more bureaus, more departments of bureaus of councils, of boards, and boards of departments, of divisions of bureaus. More, I say, more.

I have witnessed an infinite amount of selfish aggressive idiots putting the pedal to the medal when that yellow hits.

in fact,these types start to speed up when they see the don't walk light flashing.

and if they are able to see that light on the sidewalk pole way on the right there is absolutley no need to put some special needs giant light on top.

This is ONLY about ticketing motorists (note the big camera in that photo). Other cities have signals separating traffic completely. There's no reason we couldn't do the same.

There is a camera and a speed detector in the photo.

That is a camera, the one that is over the top and loops back down. It isn't the kind that takes pictures for the tickets, it is for surveillance.

Big Brother/DiBlasio is watching you!

Eat your vegetables and pay your taxes!

What is that white square thing next to the light?

it's a ez pass transponder. it monitors traffic and can track individual cars