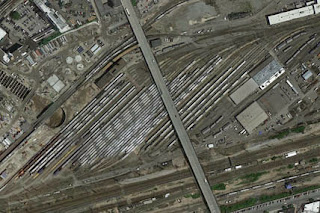 The Mayor has discarded the wishes of the electorate in his enthusiastic speech about his Yards development plan, which seems to favor giant real estate interests and construction workers who do not live here (East Side Access workers live in onsite dormitories). This disconnect from actual human beings who have chosen our lives in Western Queens, who believe we live in a democracy, look to him as our Mayor, not the Mayor of only people who live elsewhere or who have not yet moved to NYC, is a shock.

A "Sunnyside Starrett City" being featured so lavishly as a centerpiece of his February 2 speech, when one has yet to find one resident in favor not connected to current government or special interests, gives the appearance that the entire project is one crafted by rich, powerful people that Mayor deBlasio has accepted dutifully. He gets to let giant financial firms make millions, gets to please the unions and others giving huge donations to the party, and can call it “affordable housing,” as though it is a kindness to the needy.

If affordable housing, whatever that means, is wanted, why not immediately buy five vacant small lots in Sunnyside Woodside here, and get started, for a fraction of the billions this will cost us taxpayers? In two years, something real can happen. The hole in the ground at Sunnyside center where Dae Dong burned down has been ready for 14 years.

If the Yards are built over as he projects, that would mean that there seems to be a frightening marriage of political, economic, and organized labor at a national, state and local level which is not by the consent or in the interest of local voters, taxpayers and residents. The words used by his aides, that the Yards are an “ugly scar,” and we residents are clamoring for decking, sounds like heartless people looking down upon us from on high.

Many in the Queens are shocked at the mayor's lack of interest in the welfare and wishes of actual residents and small businesses. Mitch Waxman, Astoria resident who reports and photographs for NewtownPentacle.com and Brownstoner.com, says, "I find it surprising that the self-proclaimed progressive mayor of New York City has so thoroughly embraced the plan of Michael Bloomberg's former Deputy Mayor Dan Doctoroff. (Doctoroff was CEO of Bloomberg LLC.)

We live in a one party system out here, with so much power in the hands of elected officials to dispense patronage favors, that sometimes the party itself has become a kind of company, which runs for itself. That might be occurring in the larger picture now. We ask the Mayor and City Hall to care about us above all and not read the “party memo” which will forever change our lives for the worse.

And for those who want to have an open “discussion” about how to use some of the Sunnyside Yards for anything other than a giant park (hey, billionaires Bloomberg and Doctoroff, buy us a park, that will change all of our lives instantly and make you our heroes) means that once any building is done, the rest is up for grabs. We cannot build on just part of it.

Please do not build over Sunnyside Yards. If "Sunnyside Starrett City" comes to pass, it means we no longer have any say about our city. It means that all rezoning of the past 20 years of Queens is calculated to line the pockets of the rich, displace the working class and small businesses who would not be afford the new rents, is paid for by the taxpayer, and is now described as “affordable housing,” as though it is a noble goal, to crush our lifestyles, wishes, hopes and dreams. Developing over the Yards will extend Manhattan over us like serfs on their land.

(The author is a registered Democrat, union member, and lives in Sunnyside.)
http://www.thepetitionsite.com/124/232/303/please-do-not-build-over-the-sunnyside-yards/
Posted by Queens Crapper at 12:48 AM

The mayor's tale of two cities lives on. Do as I say, not as I do.

Wow, it's finally starting to sink into some of these people's thick skulls that voting Democrat doesn't promise you unicorns and candy. This fits in precisely with the powers that backed the Blaz expected from his rhetoric, as anyone could have read in even the mainstream media. The union D-head who wrote the article is acting like she's so effing surprised at how her brethren manipulate and cut deals when it happens in her backyard. Wonder where she was when the those big nasty developers were shopping their plans to destroy FMCP around to the community boards. Thought Van Bramer would keep y'all safe?

Mayor big slow whole elected career hinged on and pandered to the obesely wealthy developers and land owners. Look at his record as public advocate when Ratner was devouring pacific street and god knows who else,as reported by the local weeklies,The blaz's presence did not stop the property pimps from making it the least affordable place to live in america.yes the whole goddamn country.

And in the past year he has done nothing to stem the literally rising tide,although its not entirely his fault since mayor fun size did some finagling in his last days in city hall to make stratospheric building possible.and of course the 421a loophole.

The writer does not deserve to be mocked because she believed in the mayor,nor is she naive.The majority of people who run for office are more skilled at marketing than they are at executing and fulfilling promises they made during their campaigns.The blaz is another example of another elected who develops sociopathy when bestowed with the trust of his base and voters

this person feels betrayed,and it's good to see humility like this.Also good is that if more people wake up like her the blaz will be kept on his fat little toes.

Something happened this morning should give her hope,as there is the news that this section of city government institutionalized malfeasance that has drove all this rapid development might come to a halt

Here's hoping they start probing all the extortion and exploitation of the homeless situation involving the shady samaritan village.

I don't want to hear a word about 'developing' this land until we're told about how many sewer lines will be added, how trash removal will take place, how many electric feeder lines will be added (least we forget the 8 day west queens blackout a few years back), what new transit options will be built (subways and buses are already overtaxed in this area) how many new officers will be assigned to the 108 & 114, and when they will reopen FDNY Engine 261 and 212 (firehouses bloomberg cut in west queens and north brooklyn while upzoning both neighborhoods - we now have thousands more people and less fire protection than ever before).

Don't talk to me about more residents until there is a plan for all of the above.

How come we never have any mayor or mayoral candidate from Queens who can step forward for us?

We are the doorstop of the city.

Why do we have council members, assembly members, congress members, zoning board members, and a borough president? Lots of people collecting a paycheck and looking the other way.

It's time to clean house on so many levels.

Right up Jommy Van Bramer's butt! That is an example of what goes around comes around. Van Bramer took $$$$$$$$$$$$$$$$$$ from developers for years. Now his own backyard is threatened. When your play back door politics it is bound to hit you in the rear.

The overdevelop lop ent tsunami is headed east. Look out Jackson Heifgts. Watch out Bayside. It is only a matter of a decade or two until your town gets engulfed. Where is Queens Civic Congress? Everybody better unite to fight this Sunnyside Yards fiasco.

'Many in the Queens are shocked at the mayor's lack of interest in the welfare and wishes of actual residents and small businesses.'

When you, as a Democrat, agreed with him it was fine. Now that you are on the other side it reminds me of the old saying that ends, paraphrased, "when they came for me there was no one left to stand up for me"

The people have elected DeBlasio, and as you sew, so shall you reap.