New hotels poppin' up all over Jamaica 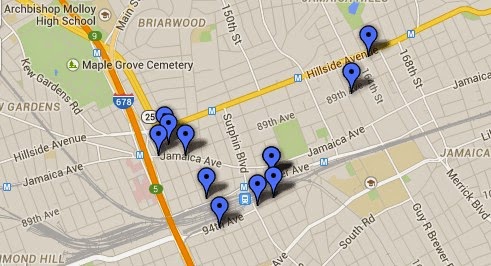 Jamaica is on its way to become the new epicenter of a Queens hotel boom.

Seven new lodgings, which are planned for the downtown area, are slated to bring about 1,000 rooms, nearly quadrupling the number of hotel rooms in the area.

Experts say that Jamaica has become the new focus of hotel developers, after two other hotel hubs in Queens — Long Island City and Flushing — have become saturated.
Posted by Queens Crapper at 12:12 AM

If I were a Jamaica resident I'd complain loud and long.

Makes perfect sense....Build a hotel, call the city and tell your available to house the homeless and BAM, your in the money....All long term rentals meaning you will have full occupancy for a long time....Oh, and don't forget to increase your daily rate, because after all you are dealing with the City.

Who the heck wants to live or visit Jamaica, NY? It's filthy crime-ridden, has low quality retail, and homeless drug addicts roam the streets and break into cars and mug people. I wouldn't be caught dead walking around there past sunset. The idiots who are pushing this hotel plan better clean up Jamaica first otherwise plan on converting those hotels into homeless shelters, or is that the plan to begin with?

More money down the black hole!

Jamaica, other than "Estates" , is a lost cause. It doesn't matter how much crap is dumped there now. Addition to the Book of Exodus: Let us leave Jamaica for the promised land.

Read that actual article in DNAinfo, it is actually a joke.

MacKay said the neighborhood, which once struggled with crime and neglect, has been rapidly changing after the 2007 rezoning, which sought to increase development in the area.

Please, Jamaica is still struggling with crime and neglect, not too mention that it looks like some third world dump. Having a hotel shortage was no problem for Jamaica, NO ONE wants to stay here, because there is NOTHING for people. I mean just look around, garbage, shady folks on the street, crap retail, even crappier food choices.

I am sure many of these hotels will end up as homeless shelter, just WATCH. These developers know what they are doing, they will make a pretty penny selling these to the city for homeless shelters.

Why must people LIE all the time when talking about Jamaica, just tell the truth.

And where is Community Board 12 and the local elected officials, oh wait, some of the officials are heading to jail, the others have not got caught yet and the rest are useless and lazy.

These are the new homeless housing/shelters for the 21st century. Get used to it.

Is it a coincidence that Jamaica has been tagged for additional homeless shelters as per DeBozo's plan to conquer the homeless problem? Welcome to the Marriot of Jamaica. Yes, you may use the pool as a bathtub.

Hey, they have to dump the homeless somewhere. You don't think DiBlasio will build one near his house in Brooklyn. Queens is the perfect dumping ground for all these shelters/hotels. At $4,000 per family per room and no residency law, there's lots of money to be made.

There are 3 hotels slated to be built on QB btwn Hillside and Jamaica Avenue. Definitely will end up as homeless shelters. Only things there are the car dealerships and auto body shops. I live not far from there - we have a family homelss shelter already there and how many rehabs. Stick it to the areas that are already down.