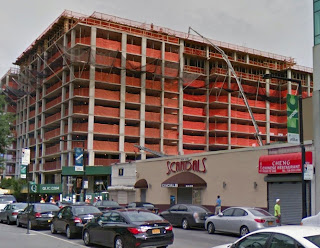 Scandals, the gritty strip club that was located in the Queens Plaza district, has closed.

The club shut its doors at its 24-03 Queen Plaza North location about 3 weeks ago, according to adjacent tenants and nearby residents. The well-known jiggle-joint had been at that location since 2002.

Scandals stood out from other strip clubs since it was highly visible from the elevated 7-train platform as well as for Manhattan-bound motorists who were about to drive over the Queensboro bridge.

The club’s closure is just part of the ongoing transformation of the Queens Plaza district, which has gone from a beaten-up wasteland to a high-end residential playground.

The Chinese restaurant next door is also closed.
Posted by Queens Crapper at 12:41 AM

They can only open in manufacturing zones.

Whatever are Kiki and Sparkles going to do for work?

Maybe some Councilman can hire them!

I miss the convenience of Wiggles...lol!

from a beaten-up wasteland to a high-end residential playground.
---
It was once a thriving community until city policies all but destroyed it. I am tired of seeing the long suffering residents poked fun at and demeaned now they are faced with displacement by development. That garbage is really getting tired.

High end? - with those human warehouses being thrown together? Playground? Sure, I send my kids out to play under elevated trains all the time.

Who the F*K writes this S*T?

Who was the mafioso who ran the strip club?