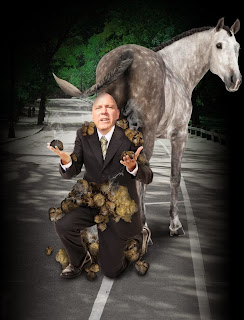 A day after calling for a “compromise” that would save hundreds of jobs in the embattled horse carriage industry, Queens Councilman Paul Vallone was acting like a jittery thoroughbred — issuing a statement reiterating his loyalty to the animal rights group NYCLASS — and saying he would in fact vote for a ban.

“While reaching a compromise would be ideal, if it came down to an all-or-nothing decision I would ultimately side with NYCLASS and support the bill,” Vallone, who is on a cruise, told the Daily News in an email.

It’s a walk-back from his earlier statements, in which he blasted the mayor for refusing to consider a solution that would make both sides happy, and claimed that more regulations would eliminate the need for a ban.

“At this point, he’d like to see a compromise, and prevent the loss of jobs,” his spokesman, Lionel Morales had said on Monday.

And in an earlier interview in the Times Ledger of Queens, which was published on Monday, Vallone said he’d learned a lot talking to drivers recently, and felt the industry could be saved.

“I think the best thing to do is to put in more restrictions and further regulate the industry,” said Vallone. “And then you will have the best regulated industry as oppose to eliminating it.”

Vallone could not be reached for further comment because he is out of town on a Caribbean vacation.

His recommitment to the politically connected NYCLASS — which endorsed him in 2013 and paid over $8,000 for campaign literature championing him — infuriated members of the horse carriage industry.

I like it when the newspapers do the Photoshops for me.
Posted by Queens Crapper at 12:58 AM

"... because he is out of town on a Caribbean vacation."

Huh? I saw him ice-fishing on the Bowne Park lake.

I hope everyone who voted for valone is proud of themselves.

Why do liberals hate the horse carriage industry?

What do they think happens to the horses that don't 'work'?

They don't live out their life running in the sun on a farm. Years ago it was the glue factory. Today it probably is the dog food factory.

I warned NYCLASS about this guy - I knew he was lying to get their support!

Take some advice , councilman, from one of your disappointed constituents. Take a stand like a real man! Straddling both sides of the fence will eventually get you stuck on one of the pickets.

I think you meant DICK in your post title!

Don Paulo is permanently "out of town" when it comes to brains. "Out to lunch" when you need to reach him, is his defense. He certainly eats a long lunch. But when one of his developer pals want to reach him, he is Paulie walnuts on the spot.

His recommitment to the politically connected NYCLASS — which endorsed him in 2013 and paid over $8,000 for campaign literature championing him

this whore works cheap doesn't he?

it's too bad for the horse carriage people,but this is how the new new york operates now.Outright lies and slander is not beneath the likes of ny class and the elected minions of the corporate land industrial complex.The blatant betrayal from an established pile of horseshit who is only in office because of familiarity and nepotism actually should not be a shock,even if it only took less than 24 hours and cowardly bailing from the city.As I mentioned yesterday,it's why they put a statue named civic virtue in a graveyard.

money talks with more authority than ever.it as surpassed english as the unofficial national language.

Why does this surprise anyone? After all, he is a Queens Politician.

You vote for shit you get shit.

Just wait ... I predict the Conehead will come up with a third side of the issue to support, as soon as he returns from vacation of course.

I wish i was the horse in that picture.

Who says all Liberals hate horse carriages? I do, and wouldn't presume to say that all Conservatives support them.

Remember Tony Avella wanted to ban horse carriages when he was councilman.

Why do liberals hate the horse carriage industry?


Paulie V. is definitely not a liberal, so I don't know where you're coming from.

This is a guy who tried - and failed - to get the Conservative line in 2009 when he ran for office the first time.

Vallone is a chameleon - he will do or say whatever his clients (read: campaign donors) tell him to do.

Remember Tony Avella wanted to ban horse carriages when he was councilman.

Avella still opposes it, which I disagree with, but at least he's consistent and doesn't change his positions depending on which way the wind is blowing. Are you listening Paulie?

Sometimes even Tony Avella can be a horse's ass. Mostly he is on target.

I hope Tony Avella runs for his old council seat when the time comes...it's time to put La Familia Vallone out of business

I wish Al Centola and or George M would run. These guys are doing incredible things in and around Whitestone.