Macedonia AME Church may be torn down 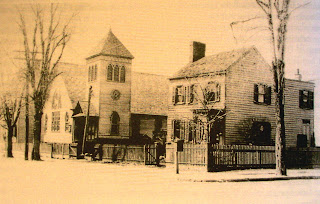 A historic 19th-century Queens church that once served as a stop on the Underground Railroad could be facing the wrecking ball as leaders in the Flushing congregation consider a proposal to replace the aging structure with a new sanctuary.

The African Methodist Episcopal Church on Union Street dates back to the 1800s and today remains one of the borough’s two surviving stops on the Underground Railroad, a network of people and buildings used to shuttle slaves out of the South before the Civil War.

Flushing’s John Bowne House is the borough’s other surviving remnant of the network that brought an estimated 100,000 slaves to freedom in northern states and Canada.

But church officials, concerned about structural problems in the building, are considering building a new church on the site.

Revered McEachern confirmed that they are in the “developing stage” of tearing down the church so that a new worship site could be built. He said that the various historic elements of the building, like the church’s vaulted roof, would be preserved and used in the new building. But he declined to comment on the decision, which was made by the church’s board of trustees.
Posted by Queens Crapper at 12:08 AM

There were architect's renderings existing about twenty years ago at AME about a new church being built on the site. I saw them.

no picture of chuch today???

It won't be rebuilt - it will end up being another unnecessary tower contributing to the overpopulation of NYC!

Some developer is paying them a fortune to leave!

Does it really matter any more? The old church has been altered dramatically already. The rest of Flushing looks like shit. History vanishes here on a daily basis. Eventually the Asians will drive out the remaining African Americans from its streets.

These AMEs are Episcopalians of higher middle class ranking. The old Ebeneeer Baptist Church, of the commoner folk, still stands with a new church built alongside it. I guess that a new building for AME that visually fits in with Flushing Commons is more desirable than the old funky looking structure.

We lost St. Saviour's church in Maspeth so let's hope this piece of Queens history can be saved.

One can't count on the Queens Historical Society because they are basically an impotent organization. Obviously the local politicians won't care to get involved or if they do it will be half-heartedly. The city Landmarks Preservation Commission is another waste of time because they only care about the history of Manhattan and Brooklyn.

I hate to say it but maybe a character like Al Sharpton could get involved to raise some cash and fend off the wrecking ball.
It could afford him a chance to gain some legitimacy by assisting in the preservation of the history of racial freedom in NYC.

'Flushing’s John Bowne House is the borough’s other surviving remnant of the network that brought an estimated 100,000 slaves to freedom in northern states and Canada.'

That number is a guess and likely wildly overestimated.

If they can't afford to restore it, tear it down and build a huge glass and steel structure in its place.

This is Queens. We don't need no stinkin landmarks!

Is it me or did EVERY 19th Century building in the news serve as a stop on the Underground Railroad?

Keep on complaining, spreading the news and emailing anyone in involved..sometimes the squeaky wheel gets fixed. This is just absolutely wrong in so many ways. Queens needs to push for preservation and historic sites, especially the Macedonia church that has so much history to NYC, Queens and Flushing. This church should not only be glorified but organizations and political leaders should be rushing to help with restoration. I bet that the foundation of this church is messed up because of all the mega construction being built around it. Which might be a legal issue and could gain a legal settlement for money to fix the foundation and stabilize the historic church. Preservation is possible of this historic Macedonia church in Flushing, Queens and the wrecking ball is not the answer we should allow.

Delivered music gear (amps)in there some years ago. I saw nothing in the structure that can’t be fixed with good craftsmanship. It could even be jacked up so the foundation walls and posts can be replaced with concrete footings & pressure treated posts (that’s likely the issue)

They need contractors from outside NYC who do this specialized work, all the local morons says "it's to old, knock it down" Then some Asian offers to build cheap with computer generated crap. Once old craftsmanship is gone is gone for ever!!

These AMEs are Episcopalians of higher middle class ranking.

The AME Church is Methodist - they are not Episcopalians. The word "Episcopal" in their denomination's name just means that they are governed by Bishops.

It is likely too late to save this church.

Follow the link to the artists rendition of the new site with housing:

Property near the subway, a prime location. I hope they have some parking with it!

Because they expect the people in Queens to automatically listen to anyone who has a thread of authority even to the point where they do something that is harmful to their own interests.

That is what happens when you are taught to listen and not to think.

F--k that! Methodist...Episcopal. Higher tone folks...not the nitty gritty Baptist. A Lott of Methodist and Episcopal "White" slavers out there on history. Learn yours.

Agreed! Queens Historical Society is an impotent organization. Having served two terms as a trustee there, I regret to say that their "fights" to save historic structures (though well mounted at times) falls upon deaf ears. When you have borough government (borough hall, in particular) that is pro development and anti preservation...what can you do? QHS has to rely upon some funding from that same borough hall. G-d bless Queens and deliver us from the destruction that , we as voters, permit.

One of AME's staff , we believe, is or was a member of Queens Historical Society.

What is all the fuss about? Historic St. George's church on Main St. Is the second building there that predates the mid 19th century church that stands there today. The old Quaker Meeting House was doubled in size from its original structure. Building a bigger church, while retaining portions of its history, speaks well for an African American community that remains in Flushing amidst a vast Asian population. Let.'s put our hands together for some real dedicated loving peaceful "Black power"!

What about that charming clapboard house in the foreground? It was destroyed many years ago. NYC seized the land for the purpose of building the Bland Houses which were built elsewhere on less desirable land. This was an attempt to drive out a middle class African American community and pave over its history by building a municipal parking lot in its place. Now we have lost that lot to private Asian interests.

Quote: "Building a bigger church, while retaining portions of its history, speaks well"

Bullshit, IMHO That statement is just public relations lollypop for the dumb ass public (most dumb enough to believe it) The church simply sold out like all the rest of them going down !
Zion Consulting LLC are like ambulance chasing lawyers, especially with old churches, mansions & old hospitals on big chunks of land.
"we will make your land big money and battle on your behalf for a piece of the pie"
Recycling some slate roofing, wooden, beams, hardwood floors, & mantels would have been done anyway. Recyclers in co-hoots with the builders strip these old structures down like old battleships leaving them naked before the kill. (No dignity at all)
As usual whats going up is cheap curtain wall shitboxes made on computers !
These people should be ashamed of themselves !!

To add-- I have my doubts about Anything being re-used. The "rotten timbers" excuse will come into play because people that build shitboxes don't have the skills to make use of old roofing tile Vaulted ceilings & assorted beams regarding the period. All that is likely to be labeled "rotten cant save" numbered, packed up, sold and shipped away.


"Let.'s put our hands together"
Yeah to vomit on all fours!! In my opinion the buzzards at Zion Consulting LLC talked the church bosses into SELLING OUT under the standard guise of "rotten timbers"!!!
Its happening all over as these old religious institution's dwindle!!

Uh, Joe, I saw the proposed plans 25 years ago. It was not a curtain wall. Have you seen them? Better to run your comments through your brain and look at the plans before you speak. I personally do not like the idea of expansion at the price of destroying history...but there ha go. Progress affects us all.

Emm , nice try now go sit in the corner and let me teach you something. :)
If you read (before) one of the guys in my old band played music there I know the building and the old plans.
We didn't even have computers that could render these presentations 25 years ago so you aint fooling me ! The plan from 25 years ago, is was hand drawn, more traditional construction and far more expensive in today's dollar.
This new garbage with suspended floors, mirrors, angles & bling IS cheap slap up soulless CAD crap !!
Perhaps flushing deserves it.

Progress my ass!
Progress is a idiom liberals utilize when they need to feed the average public shit and make them deem it a gourmet meal !
And that's a FACT !!

I guess now we know what they are doing with the kickbacks from the affordable housing eyesore.