Mystery of the missing money 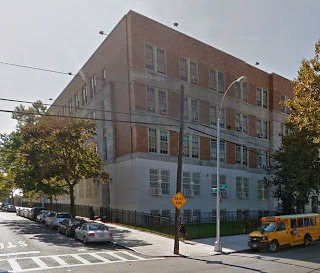 Teachers and parents at William Cullen Bryant HS in Queens are demanding an accounting of more than $195,000 collected from students for gym uniforms, paddle locks and food.

In response to a Freedom of Information request, the city Department of Education said it could find no receipts for such purchases from the school store from 2011 to 2013 — and only some from 2014.

Gym teacher Peter Maliarakis said Principal Namita Dwarka has refused to account for the sales — the profits from which are supposed to pay for student activities and phys-ed equipment.

Bleachers in a school gym are cracked and missing sections, and mats for wrestling and gymnastics are mildewed and peeling, Maliarakis said.
Posted by Queens Crapper at 12:17 AM

They should reimburse the taxpayers of NYC for the 10 days that they are out of town not working for us here in our city.

'Gym teacher Peter Maliarakis said Principal Namita Dwarka has refused to account for the sales — the profits from which are supposed to pay for student activities and phys-ed equipment.'

At what point do they call the police?

Typical NYC. Some dirtbag with their hand in the cookie jar and no real interest in finding out where it went.

I now sign my property tax check with a smiley face!

Queens High Schools- the DOE's version of a bizarro world alternate universe.Just missing the evil schemes of Newman and Kramer.

At least, Little League $$ is safe, ever since Brian McLaughlin was caught siphoning off the money.

Maybe you should google paddle lock and you will find out what one is!

sounds like the DOE made the mistake of hiring a Nigerian.

This would NEVER happen in a city controlled by Democrats!!!

if I am mistaken and I went to W.C. Bryant H.S. and graduated in 1973 I had to pay for my GYM uniform and also had to buy a lock for my locker -- so tell me why are these students getting this for free -

Check the Principal's Cayman Islands bank account... you will find the money there.

They aren't getting it free, they paid for it and the money is missing.

She has quite the history.
Another AA appointee.

Joel Klein was a student at Bryant. He lived across the street in the Woodside Houses.

The really appalling part of this is that if no one had submitted a Freedom of Information Request about the money, no one would have been the wiser...


GUN PRENTZAS
More than 200 students stood outside of William Cullen Bryant High School on Monday, protesting the principal they call "tyrannical" and "discriminatory."
How badly do you want an A?

In the wake of a rally at the Astoria high school on Monday to protest Dwarka’s decision to cancel math and science programs and her alleged neglect of special needs students, teachers have now come forward with allegations of rampant grade fixes.

But an Education Department spokeswoman said that none of the complaints filed against Dwarka since last year have been substantiated.

“It’s all because she wants to increase graduation rates,” Gus Prentzas, president of the school’s Parent Association, told The News. “She would do anything to make herself look good.”

Gym teacher Peter Maliarakis, who claims he has a binder full of documents outlining Dwarka’s inappropriate behavior, says he was dumbfounded when he learned that one of his students had passed gym — even though he gave the senior a lowly 55 on his report card.

“I walked in with my girlfriend to get my final transcript, and I saw that I got a 65, so I passed,” said Peter McGroary, 18, who dropped out before graduating. “That’s when I saw my teacher and I said, ‘Thanks for changing my grade!’ But he said, ‘What are you talking about, I never changed any grade.’”

Various students, parents and teachers contend that Dwarka is responsible, as this wasn’t the first time grades changed in her 2 1/2 years as principal.

In 2013, the school’s health teacher, Adele Lynn, failed a student who didn’t show up to class for the entire marking period, giving her three chances to hand in a makeup assignment. Lynn was then told by an assistant principal that Dwarka would “decide if (her make-up assignment) was acceptable,” Lynn wrote in a complaint with the Education Department.

In the end, the student’s report card says her grade is a 45, but her final transcript says 85, according to records obtained by The News. An Education Dept. spokeswoman was not able to immediately disclose the outcome of the complaint.

“Ms. Dwarka never informed me that she was changing the grade. I checked the student’s transcript,” Lynn said in the complaint. “I have taught school for 24 years and have never experienced this amount of disrespect.”

For his part, McGroary said altering grades makes sense for students who deserve it — but that didn’t apply to his situation.

“It’s one thing for your grade to be changed if you deserve it, but I didn’t,” McGroary said. “I was fooling around the whole time.”

An Education Dept. spokeswoman said that three complaints have been filed against Dwarka since last year, and all have been investigated, including allegations that she changed grades and pressured teachers to change grades.

None of those three complaints have been substantiated.
RELATED STORIES
Students protest principal at Bryant High School in Long Island City

Gus Prenstzas was involved with that crying icon scandal. I wonder whats his roil in this ?