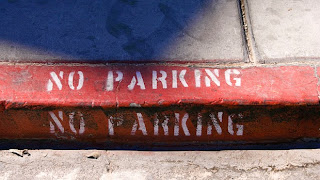 A city lawmaker is proposing a measure that would require the city to paint curbs near fire hydrants and bus stops with red paint to clarify them as no parking zones.

Brooklyn City Councilmember Vincent Gentile will introduce the bill to the council this week in an effort to spare motorists from receiving tickets issued when they park too close to hydrants and bus stops throughout the city.

Motorists face a $115 fine if they are caught parking within 15-feet on either side of a hydrant or between a bus stop sign and the closest no parking sign on the same block, authorities said.

Gentile said the red paint would stand out and eliminate any question as to whether or not motorists are parked in no parking zones.
Posted by Queens Crapper at 12:52 AM

Finally someone's bringing it up

Great idea but why not use yellow? It would be easier to see at night.

And how about fining people for creating illegal curb-cuts AND for painting curb-cuts yellow in Queens - this practice is rampant - esp. in the more ghetto neighborhoods such as Corona, Elmhurst and Jamaica.

The city could make a fortune. If they won't pay at the time grab the money when the house changes hands.

Red, yellow, day glow green....what's the difference? It will be ignored by our "diverse" population anyway. Maybe the "no parking" should be translated into Chinese, Russian Spanish, etc. This way no group can claim it was left out.

Very Chinese red....good luck...power color. Do it in Flushing first.

How about people just use a little common sense when parking.

Somebody should bring this up in in Flushing. Peter Koo, where are you? Flushing has inadequate emergency services, schools and hospitals. The overcrowding has outpaced infrastructure decades ago. Forget it Jake. It's Chinatown. The teaming Orient has its own rules and practices.

Another do-nothing elected official with his finger on the pulse of his constituency. Who dreams this stuff up?

These pols are lazy liberals who have nothing between their ears and too much time on their hands. Coming up with useless suggestions like this , they hope, will mask their incompetence.

Personally I think this is a good, common sense proposal. If the law is 15' show us where it is so both drivers and DOT can clearly see it. But, to several Anonymous out there - why does every post become racial for you? Stay on topic and leave the other crap out.

Anonymous r185 said...
"Personally I think this is a good, common sense proposal. If the law is 15' show us where it is so both drivers and DOT can clearly see it. But, to several Anonymous out there - why does every post become racial for you? Stay on topic and leave the other crap out."

Although I agree with you, I also think people who usually have not found success or complete fulfillment in their lives need scapegoats...

Why does the whole 15 feet have to be painted, why not just 2 end lines. Measure 15 feet paint measure 15 feet draw another line, done. Chapter, faster, not ugly.

"Anonymous out there - why does every post become racial for you?"
Because white law abiding citizens are tired of the some Asians getting away with breaking the laws.

I think this is a common sense proposal. Most drivers, myself included, probably park closer to hydrants than we should. I don't carry a tape measure with me at all times, so I eyeball the 15 foot distance. So does the ticketing traffic agent, meaning that some drivers may be ticketed unfairly. This proposal will take the guesswork out of the equation for both sides and help ensure that NYFD has the room it needs to work should a fire occur.

Why were hydrants ever physically positioned quite a distance from the corner? If hydrants were positioned directly at and on the corner, you'd have one, maybe two, additional parking spaces nearby right there.

Red, yellow, blue, whatever, what difference does it make, if the laws are NOT enforced especially in communities like Jamaica where this happens all the time, along with illegal curb cuts, illegal parking pads and property owners painting on the curbs and sidewalks with no parking in front of illegal curb cuts.

You can have all the laws you want, but if they are not enforced what difference does it make and that it the MAJOR problem in this city and QUeens.

"It will be ignored by our "diverse" population anyway."

The city used to paint the hydrant space yellow, why did they stop?

Didn't we already try to do this before with some bus stops with the yellow paint on the curb but then the city did not upkeep the paint of it so most of the paint just faded out?

Sounds like common sense to me, but you all know common sense is not very common in Queens. If the curb cuts are colored, there can be no dispute about a ticket and people can take a picture with their cell phone to prove their case.

First the city needs to provide me a curb. They have been "working on it" since 2008.

I think it's another feel good program that will be ignored by the cynical masses and never enforced by officers who habitually violate traffic and parking laws themselves.

the city just and will always,because it's easier,rely on the usual traps,speed and dubious illegal turns.thanks to perpetually using an endemic quota system in raising revenue.

Great idea. I've been calling for this for years.

To Anonymous who said "Although I agree with you, I also think people who usually have not found success or complete fulfillment in their lives need scapegoats..."

I couldn't agree more. Their comments speak volumes about their bitter lives and need to have someone for them to feel superior to. Sad when they aren't even capable of a discussion about parking without bringing their own prejudices into it.

BTW, Could the moderator of this forum please prohibit "Anonymous" as a name, so there aren't 15 Anonymous comments and we can't identity one from the other? Thanks.

"within 15-feet"
Isnt the current law 8-10 feet?
15 sounds far overboard and not necessary even for a bus turn corner.

The idiots paint the curbs like that in California, it does nothing !!! Many of the cars committing the illegal parking and abuse have bogus out of state registrations with forged names and addresses.
The shithole Tennessee, Carolina etc.DMVs take any ID and insurance is optional. A good 1/2 owners true identity's and addresses dont even exist !!

The city needs a system to scan these cars for valid insurance & owner registration. The city would make millions impounding confiscating however that would upset the illegal immigrant population. -we cant have future democrat voters upset ya know.

paint them so the cops will be better able to see where to park their personal vehicles.

I have no problem with painting curbs near hydrants as it would make enforcement easier, but I think the personal responsibility still needs to stay on the drivers to ensure they are not parked within 15 feet of the hydrant. If the curb isn't painted and you park to close it is still your problem and you don't get a free pass. I am sure most enforcement agents know that the rule is 15 ft, but only actually enforce for cars parked within 10 ft unless they are caring a tape measure. I know in my neighborhood I routinely see cars parked within 5-10 feet of hydrants without getting ticketed.

Many of the cars committing the illegal parking and abuse have bogus out of state registrations with forged names and addresses.

Or fake "official" parking placards. The placard should have a barcode that can be scanned to make sure that it is legitimate, and that the placard matches the vehicle.

Hydrants and bus stops are no standing zones. FD used to paint the hydrant lines and nyctransit used to do the bus stops, and yes,10 feet is fine.......no pun intended.

1st of all, all this will do is to confuse the many illiterate drivers already out there. You know, the one who think turn signals are an option that their car didn't come with.
2nd, in NY city, painted curbs are not a legal designation. They mean NOTHING. Look it up. Most people don't know that. For years, hotels have been painting the curbs outside their entrances yellow and having their doorman tell people that pull in to park that they are parked illegally. Periodically the city will try and fine them but it gets thrown out when the most they can attempts to get them on is basically defacing public property and then that is extremely hard to prove. For this to work, the law would have to be changed. And what do you do when people paint the curb outside their house red?
3rd is it really that hard to estimate 15 feet? The average car length is around 18'. If you are more than a car length from the hydrant, you are fine. If you think there is room behind or in front of a hydrant, pull up next to the hydrant with your bumper even with it and see where the front or back of your car is, and that's where the legal spot starts. Not rocket science. My big feet in shoes happen to be almost exactly 12" long. If I'm unsure, I'll actually pace 15 steps heel to toe. I'll bet this will work for about 90% of the population. If your feet are smaller, take an extra step, bigger, take one less. Wow! Instant measure. Again, not rocket science.
4th, when the city gives a ticket for "too close to,a hydrant" the agent should be required to put down, in feet, exactly how close you are. They should be required to measure. The law states 15'. Not "approximately 15'" not "15 feet or so". The agent should be required to state "vehicle was 8' from hydrant" etc. I sussesfully fought a ticket this way once.

Now the bus stop one is a whole nother issue. I once got $175 fine in the city because the sign at the beginning of the bus stop was there, but the sign indicating the end of it had been removed for construction. This was on a long city block. I was parked so far up the street I could barely even see the busses from where I was. The city stated that if there is no 2nd sign, the entire block becomes a bus stop. Or until there is another parking regulations sign.
There should be a designated length for bus stops; 6 car lengths, 175', something definite.

Will never happen. This is a revenue stream for the city.