Paul Vallone had a great vacation 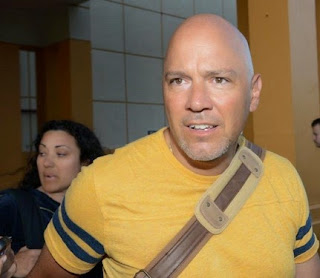 "We are listening to the horse drivers, seeing both sides. It's very important. I want to make sure we can see the final bill before I make a vote. I think, after meeting everybody, it's been very, you know, informing of both sides," the Queens pol said in San Juan at the conclusion of a Caribbean cruise with family.

The Daily News caught the councilman as he got off the luxurious cruise liner and prepared to return to New York City.

"You are going to have to wait till I get home, my dear," Vallone told a reporter asking why he'd reversed his position on horse carriages. He did confirm the vacation had been delightful.

What the News failed to report is that Mr. V was on the cruise with a developer friend of his...
Posted by Queens Crapper at 12:12 AM

King of the douchebags. Peter is crown prince.

He and his brother Peter still think they are teenagers. When will they ever grow up and give into middle age?

Stinky: I want to make sure we can see the final bill before I make a vote.

Stinky translated:I want to give everyone an opportunity to bribe me and then I will review and make a vote.

How many days til Christmas???

He looks like a deer in the headlights. Why do I have to explain my flip flopping?

The Gazette covers this guy more than Costa hoping (successfully we are sure) to convince the typical Astorian that Junior is still around.

Reminds me of vintage game, "Mister Potato Head"....with the IQ to match.

He's not the only council member who has close contacts with developers. So why is this surprising?

Did developer friend pay for trip??

Grey hair on the chrome dome?

Whew! Glad the fotogs didn't see us getting off the El Al flight.

Was that developer friend's name begin with an "R"? Is he a neighbor? Do they both go to St. Andrews?

Only Don Paulo's wife, whoever, could tally his banana.

Bayside is so screwed

Why must I be surrounded by friggin' idiots!

"You are going to have to wait till I get home, my dear," Vallone told a reporter

Surprised he didn't just call her 'toots' - did he learn to talk to women like that from his (saintly) father?

I always vote down the line Democratic which means I voted for Vallone. People here talk about a Republican challenger - I would never vote for a Republican. If someone ousts him in the Democratic primary, so be it.

For the moderates here - look at the city council. 48 Democrats, 3 Republicans. The only Republican outside of Staten Island had 47% of his constituents voting Democratic in his last election. Melissa Mark-Viverito had less than 6% of her constituents voting against here. In Bed-Stuy the Working Families party got four times the votes Republicans did.

I might vote Green or Working Families, but never Republican! Keep dreaming.

Perhaps you forgot that Vallone was considering running as a Republican. So in fact, you voted for a Republican.

I attended a meeting last night where I overheard Warren Schreiber complaining how he thought the paparazzi attack by the Daily News on Vallone was not nice. Kim Ohanian rebuked him noting that part of any public official's job was to take the heat.

Let's see if Paul Vallone attends the BFHA meeting this Thursday that Melinda Katz is supposed to be attending. Maybe he will be a no show after reading this post.

Paul Vallone, like the rest of his family, is a weathervane. He will blow which ever way the wind blows. A pol's main responsibility is to get elected and re- elected. His "public service" plays second fiddle. If you want your councilman to really represent you then you have got to make sure that you have him by his short hairs. He works for you....supposedly....not the other way around. Every public official should be required to provide his time sheets for examination on line. And, no more part time employment for council members. If everybody else works an 8 hour day, so should Paul Vallone. Instead of consorting with his developer clients and hiding out in his law office, he should be hitting the bricks for his constituents. LOL! Perhaps that is too much to expect from a lazy entitled pol. Bon giorno Don Vallone.

Vallone would run on any party ticket to gain office. He'd even suck Godzilla's dick to become speaker like his dad.

What a bald headed hunk. Makes Mr. Clean look like a pansy. Does he give skull? Ooh, that shiny dome gives me goosebumps. Ride him, cowgirl!

How many vacations does this guy take??
And how does he afford them on councilman's salary. I'm assuming his wife does not work.