Vigils set for tonight and tomorrow 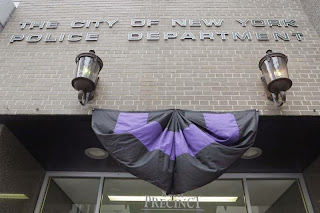 The 104th Precinct Community Council announced it would hold its vigil at 7 p.m. Monday night in front of the 104th Precinct's stationhouse, located at 64-02 Catalpa Ave., two blocks east of Fresh Pond Road.

People of all faiths are organizing a similar candlelight vigil tomorrow night at 6:30 p.m. at the 108th Precinct's Long Island City headquarters, located at 5-47 50th Ave.

Finally, the 112th Precinct Community Council will honor the lost officers at the precinct's Forest Hills stationhouse, located at 68-40 Austin St., at 6 p.m. Tuesday night.
Posted by Queens Crapper at 6:09 AM

So I guess those that wanted this scenario will now show up to mourn
OK got it.

This is a shill to prevent some 500- 5000 people “waiving rope” and pitchforks outside the mayor’s residence. The latter would be much more effective effect and you know dam straight the cop’s wouldn't do much about it.

Vigils do nothing! Its sad to see so many are taking the bait and choosing to sing "Coombaya" VS some GENUINE old New York style effort. -As in the type of engagement and flesh management these progressive liberal son of bitches like diBlasio & Melissa Marc V deserve.

If people want the America & New York they once loved back they need to grow some balls, get with the cops and run the shit out of town !!

NYPD should boycott vigals,kill a cop demand peace, kill a thug,riot,loot,burn,assault, murder,etc etc,
Give Sharpton his No Peace
Pull the cops from the gettoes and let the bodies start rotting in the streets
NO APPECEATION NO POLICE PROTECTION
THATS THE NEW SLOGAN BLAS.

Just got back from the vigil at the 104. Since Officer Ramos's services will be a few blocks from the Precinct, it was part mourning/prayer, part political and informational about the services/104 duties/neighborhood impact. There was an opportunity for people to ask questions. Very respectful and all local folks. Borough President Katz, Assemblywoman Marky and Councilwomen Crowely were all there and each spoke. I'm glad I went and could feel the pain of everyone in the air. Oh, they said Officer Lui's family is flying in from China, so his services aren't solidified yet.

Also one this evening at memorial field in Whitestone. Put together by the new We Love Whitestone group to honor the local police and let the mayor know that Whitestone supports their officers.

Borough President Katz, Assemblywoman Marky and Councilwomen Crowely were all there ....didn't know The Three Stooges were back together.