Maspeth high schoolers left out in the cold 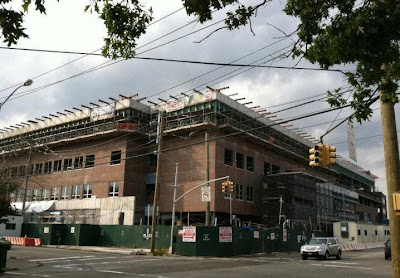 Maspeth High School is scheduled to open its doors this September, but many incoming freshmen who live only blocks away from the campus may not be attending.

The Times Newsweekly was informed by several sources that a host of eighth-graders at I.S. 73 in Maspeth—located about five blocks from the high school being constructed at the corner of 57th Avenue and 74th Street—were informed by the Department of Education (DOE) in writing that their request for admission to the new school was rejected under the Citywide School Admission Process.

Anna Croce, a Maspeth woman whose son at I.S. 73 was denied entry into Maspeth High School, told this newspaper in a phone interview that her child and many other students in the area were devastated by the news.

“Four children on my block who go to I.S. 73 also got rejection letters” from Maspeth High School, she said. She claimed that high school administrators previously assured her and other parents of I.S. 73 students that their children would be “first picked” to attend the local high school.

Instead, many of the Maspeth students were assigned to schools as far away as Far Rockaway, Croce claimed.

A spokesperson for City Council Member Elizabeth Crowley, Eric Yun, told the Times Newsweekly that the legislator’s office has heard similar complaints from parents of rejected students. The office learned that Maspeth High School “filled up pretty quickly” with students from around the confines of School District 24; there was no evidence to suggest that any students from outside the district were admitted, he added.

The office is now working with parents of Maspeth students who were not admitted to Maspeth High School to see if alternate arrangements could be made, Yun added.

“We've been assured that the students accepted to Maspeth High School came from the local area,” Crowley said in a statement on Tuesday afternoon. “I will continue advocating for Maspeth students who have not been accepted so that they have the opportunity to attend their local high school.”

Local civic groups, including District 24’s Community Education Council, repeatedly called for Maspeth High School to be “locally zoned” to give children living in the surrounding area a chance to attend their neighborhood school, but those requests were ultimately rebuffed.

You'll recall that Crowley was against this school before she was for it on the grounds that it was not locally zoned, but somehow forgot to rally the rest of the council to vote against it. She failed to secure the same type of deal that she helped get for the Queens Metropolitan High School in Forest Hills, which her kids attend. One of many Crowley failures and one of many ways she has wiped her ass with the community she falsely claimed to have grown up in while she was campaigning.
Posted by Queens Crapper at 12:53 AM

All part of Bloomberg's plan to destroy middle class neighborhoods and turn them into slums. If your kid can't even attend the local public school, then what's the point of living there?

Elizabeth Crowley is disgusting. She and her office do nothing except bring garbage projects like this one to Maspeth. Where's the park she promised us a year ago, by the way?

Crowley probably is too busy making conjugal visits with McLaughlin.

That granny molester Dennis Gallagher wanted the high school in Maspeth and Elizabeth Crowley is paid off by the construction and teacher unions. It's time to wise up Maspeth and stop voting for these corrupt clubhouse politicians.

If this calibre of elected is what the parties give us, then what is the alternative?

Elizabeth doesn't give a shit about the neighborhoods or the people she represents. She's a put in by her cousin Joe. Perhaps she should move to Virginia and live near him. Sadly, the stupid people that elected her because she is a "Crowley" will vote for her again. That's why people are moving out of NY. Maspeth and Middle Village are still nice neighborhoods, but have deteriorated in their quality of life because of the projects these politicians propose and fill their pockets with. With the real estate taxes (which have doubled under the Bloomberg administration) continually rising, one would think that at least the high price of living here would ensure that our children would at least attend their neighborhood high school. By the way, most politicians send their kids to private school and don't care about your children or their education.

Clueless and Illiterate. She can barely put a sentence together. Definitely not the brightest bulb in the box.

A friend of mine is a NYC school teacher (she’s quitting in June). According to her this school and many others is going to have over 6 Spanish speaking classrooms. Mostly for feral offspring of illegal foreign kids from Corona and Elmhurst.
-One big baby sitting service.
Its criminal how Maspeth is constantly beaten like a big pinata by the mayor and his friends

Bloomberg has a hard on for Maspeth. He's always ready to dump on us. I think the plan is to destroy all the nice neighborhoods so that you can't tell one shit hole from the other. Jackson Heights was once beautiful. Look at it now. Bloomberg's goal is to get rid of the middle class. Looks like he's succeeding.

Well said, amen - we will soon be the Bronx we are half way there. We need to stop accepting illegals into our schools system to free up seats for citizens.

The parents of these kids may better off pooling there money and hiring a good private teacher in need of a job and paying a church for basement space.
The Mayor and Crowley should be sued and held accountable to pay for for playing Robinhood with peoples taxes.
Carting 4th and 5th generation Maspeth school kids to Rockaway is pure insanity.
NYC schools are F_cked. How is it possible to educate kids in a "Planet of the Apes" environment ?
An education in multicultural crapola, carrying knifes, guns and condoms perhaps ?

From what I get NYS law requires6,480 minutes per unit of instruction per school year for home schooling. (whatever that means)

when "FORCED BUSING OF PUPILS BASED ON RACE"was perpetrated on the Nation by SOCIAL ENGINEERS in the 1970's, and the democrat congressmen would not listen to the people a group named N.A.N.S. (The National Assoc. for Neighborhood Schools )formed.

we lobbied all politicians and punished them with replacement and exposure.they were hiding behind the robes of the local federal court judges.
it took until 2002 for the SCOTUS to rule forced busing UNCONSTITUTIONAL.

many of the dem.queens pols. , dead now and some living, were also hiding in ny state,nyc , and D.C.

you parents of the public system have to organize and be active, or move or enroll your child in a parochial school. do not expect the U.F.T. employees or your C.S.B. appointed P.T.A.'s to help. many in most queens communities are beholden to the bureaucrats .

Since gas is $4 a gallon and rising, maybe it's time for the DOE revisit the busing issue. The cost of transportation of students rests on the taxpayers. Maybe the DOE should concentrate on making students attend their neighborhood schools. Imagine how much money would be saved. It's a simple solution. Too simple for the DOE and our politicians. I guess there's lots of money to be made in busing contracts.

for more info on how N.A.N.S. began,read "THE BUSING COVER UP" by Edward P. Langerton (Dr.Ralph Scott Phd.). E/bay$5.50. he had to use a pseudonym ,because he worked in the Chicago education system ,in the 1970"s.

Scott is truly an American Patriot with guts.much of the scam that he exposed had it's origin with pol/educational social engineers from the N.A.A.C.P. in nyc. and nys.

Busing NOW takes place in this city because of the "No Child Left Behind Act," not because of "social engineering." They are not zoned into area schools. Instead, they have to fill out forms with a list of schools that they would like to attend. It can be in their neighborhood or it can be halfway across the city.

The number of students from outside of Maspeth who are assigned to Maspeth High School is proof of that. Check out who is going to schools like John Bowne or Bayside or Cardozo as further proof. This is not to comment on Crowley's actions (or inaction) here, just to make the point that going on about "Forced Busing" has nothing to do with the issue here that Crapper is talking about here. That's a dead issue.

And who was responsible for "No Child left Behind," anyway?

RE: IR.LEFTIE....can you confirm that the (INDEPENDENT BOARD OF SOCIAL ENGINEERS) are not scheduling the High School students by racial means ?

which side were you on during the 60's to 90's ,while the engineering was taking place, when you were a public education civil servant.

the education system that your pals advocated seems to have failed in N.Y.C. and most of the Nation

If you were the parent of high school children (I am) and saw the applications that all students have to fill out and high school fairs they had to go to in order to find the right school, you would know. It's first-come, first served. It's not the way it was when I went to school, when everyone was zoned in.

I was more interested in getting a good education in my school years. Based on the way you write, you weren't.

I happen to go to this school and it isn't and should not be just a local school. We have very high standards for the students and i know this for a fact. If students didn't want to go to schools so far away, why did they sign up for it in the first place?