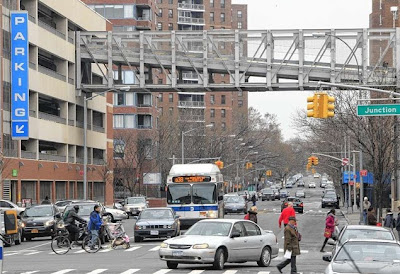 The city is looking to slow down traffic at several Rego Park speeding hotspots where dozens of pedestrians have been injured in recent years.

The situation is particularly hazardous for the area’s large senior citizen population who routinely navigate the busy thoroughfares of 62 Drive/63rd Ave. and 63rd Road around the Rego Center Mall.

That number is even higher along 63rd Road from Queens Blvd. to 112th St. where 192 people have been injured during that same time period. That statistic includes 48 pedestrians.

The department is hoping to slow down drivers with a combination of narrowing streets, removing lanes and installing back-in parking.

Along 63rd Road, where there have been six pedestrian fatalities since 2001, the DOT plans to remove one travel lane and widen parking lanes.
Posted by Queens Crapper at 12:45 AM

Nice! Looking forward to this.

The DOT has already "improved" 97th street by eleminating parking (between 63rd Drive and 62nd Road) which is strictly enforced!
(a residental block)

but does NOTHING about:
1--double parked (and triple parked!) cars on 97th street between 62nd and LIE--(the block of the new rego park mall.)

2--there are meters (metro meters now) on both sides of 97th STreet (between 63rd and 62nd)--a Residental block, but NONE on either side between 62nd road and LIE (Mall)

3--There is NO PARKING (no Standing!) on the residental block --heading north--to allow for a turn lane (left hand turn) on 97th street, to 62nd-- but no turn lane for right hand turn heading south (and there is much more traffic heading south than north)--again this area is patrolled regularly, the there is strict enforcement.

4--A Foot patrol office could write a months quota of tickets just tagging all the people who make illegal (across a double yellow line) U-turn on 97th street (between 62nd/LIE--by mall)
so many of these turns are NOT 3 POINT but 5 POINT (back and forth, back and forth, tying up traffic! going so slow an office on foot could catch up with the driver!)

and the traffic mess on Junction blvd? NO ENFORCEMENT of any of the posted rules and regulations.
on the far side of (South bound) Junction, there are regularly cars parked not at curb, but ON THE SIDE WALK!!
on the north side (mall side) there are Posted NO STANDING signs.. but the block is regularly filled with parked cars, and drivers standing to fill vehicles (with groceries/supplies from costco/staples)There are frequently not just parked, but double parked cars!

But the DOT solution is to "fix" 63rd Drive--and no doubt reduce the number of parking spaces (and to increase hours the metering is in effect) for the residents of the area!

A Red Light camera would help--so many of the accidents are cause by people speeding to beat the lights. (pedestrians be dammed!) but enforcement of the rules and regulations in place (especial at on the 4 sides of the mall!) would go a long way to fix the problems.

Why aren't they adding the 25 spots from 108th Street to the Grand Central Parkway service road (that they inappropriate call 112th Street here)? Who would be against that? There's a definite need in the area for additional parking.

The DOT also does nothing about cars with city placards hogging up a traffic lane on Junction Blvd alongside Rego Park Mall. It must be "official city business" to go shopping at Century 21.

DOT is not responsible for enforcement. NYPD is.

When are these "seniors" going to move to Florida, that's my question.