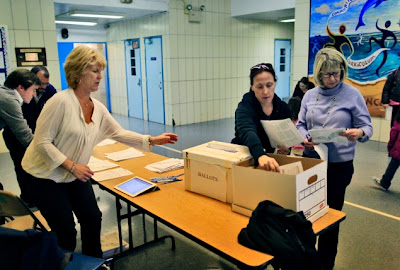 Residents of Rockaway and Broad Channel can finally let their elected officials know exactly what they would do with $1 million of government spending.

They are hitting the polls this week and voting on a number of capital projects as part of a citywide initiative on “participatory budgeting.”

The projects vary from year-round heated bathrooms on the Rockaway boardwalk to a library vending machine in Breezy Point and technology upgrades at several local schools.

Those receiving the most votes will get funded.

Four City Council districts throughout the city are hosting participatory budgeting initiatives. The only Queens site is a portion of the 32nd District, represented by Councilman Eric Ulrich.

Voting is taking place at local libraries, schools, Ulrich’s district office and other locations through 7 p.m. on Saturday.

A sample ballot and polling sites can be found at www.pbnyc.org.

Over the past few months, people from Rockaway and Broad Channel gathered for several neighborhood assemblies to suggest and select projects for the ballot.

They settled on 16 projects. Residents 18 and older can vote for five items.
Posted by Queens Crapper at 12:13 AM

Participatory budgeting, if you can get there. This is for a very limited set of people and should be looked at very carefully. I was for it but now I'm against it!

Why is this only for Broad Channel and Rockaway? E.R. represents more than just this area. Pretty select group of constituents, I'd say. I will be rethinking my support for Congressman Ulrich in the future. oops

Is there an option to return the freaking money to the taxpayers?

I do find it odd as well that Ozone Park is not included , well maybe they will be reqarded with a brand new rail line in their backyard. I'm going to go vote for a library vending machine - woo hoo

What a New School prof has to say about this process.
Money may be killing democracy, but it can also bring it back to life - if we learn new ways to manage it. Progressives often complain that the influence of big money has corrupted politics, leaving us with elite politicians that don't represent most Americans. Once in power, these politicians decide how to spend our taxpayer money, often in unwanted ways. Community groups are forced to fight for budgetary scraps, be they for social services, housing, schools, health facilities, or other services or infrastructure. This is an exhausting and often demoralizing struggle. It encourages competition rather than collaboration, and reliance on politicians rather than democratic community control. For most people, this struggle is not very appealing, so they choose not to participate.

It doesn't have to be this way. Low-income residents and activists in hundreds of cities around the world have designed a different way of managing public money: participatory budgeting. This is a process in which people who are impacted by a budget directly and democratically decide how it is spent. The most famous example is the Brazilian city of Porto Alegre, where residents decide on municipal spending in an annual cycle of assemblies and meetings.

Since Porto Alegre pioneered participatory budgeting in 1989, however, it has spread throughout the world. Most of these experiences share a common process: diagnosis, discussion, decision-making, implementation, and monitoring. First, at neighborhood assemblies, residents identify local priority needs, generate ideas to respond to these needs, and elect delegates to represent each community.

These delegates then discuss the local priorities and develop concrete projects that address them, together with experts. Next, residents vote for which of these projects to fund. Finally, the government implements the chosen projects, and residents monitor this implementation. For example, if neighborhood residents identify access to medical care as a priority, their delegates might develop a proposal for a new community health clinic. If the residents approve the proposal, the city funds it. The next year, a new health clinic is built.

Why such broad support? Probably because participatory budgeting offers something for everyone. It gives residents a forum to voice their demands and resources to satisfy many of those demands. They feel more connected to their city and better able to improve their environment, and they learn a lot in the process. Low-income and marginalized residents gain the most, thanks to their high rates of participation (unlike in most consultations) and ?pro-poor' spending criteria that redistribute funds to those with the greatest needs. Social movements and community organizations get to spend less time pressuring policy-makers and more time deciding policies themselves. Regular budget assemblies even help them recruit members and build stronger community networks. For bureaucrats and economists, participatory budgeting is a way to get better information on public needs and minimize corruption. For politicians, it can provide closer links with constituents and increase their popularity.

But participatory budgeting does not always have these effects. When politicians control decision-making and use it to support their own agendas, participatory budgeting can become disempowering. This danger of co-optation is particularly strong in the US. New York, Los Angeles, and other municipalities are increasingly holding consultations on city priorities, but not giving these consultations much power. Politicians and bureaucrats set the agendas, and although residents can share their opinions, they cannot make decisions. This controlled participation may look good for the city, but it rarely changes government spending. In the long run, it shows people that getting involved isn't worth the bother.

Co-optation is not the only challenge. Compared with Brazil, US cities have less urgent needs, more linguistic diversity, and fewer leftists in power. Experiences with participatory budgeting in developed countries, however, suggest strategies for adapting it to the US. Start small, with a pilot project in one neighborhood, agency, or program. Experiment with budgets in any institution that is receptive. Begin by engaging the most marginalized communities, so that they learn to play the game first. Build a bigger funding pot by attracting money from different sources. Use popular education and active facilitation to engage diverse residents and make sure that the loudest voices don't dominate. Link with existing participatory budgets for more legitimacy and fresh ideas.