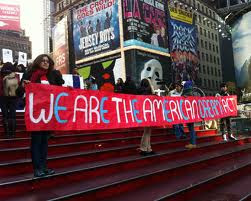 Much of the public debate surrounding proposals to allow illegal immigrants to receive state financial aid for college has centered on questions of legality: Would such legislation legitimize the status of people in the country without authorization?

But lawmakers have also been puzzling over another critical matter: How much would it cost the state?

Advocates for the bill who met this week with a member of Gov. Andrew M. Cuomo’s staff said costs seemed to weigh heavily on the minds of administration officials.

The State Education Department estimated the cost at $627,428 per year for a measure it sent to the Legislature in December. That proposal is one of at least two circulating in Albany, commonly known as the New York State Dream Act.

The department’s bill, like the other measure, would make state tuition assistance available to illegal immigrants attending college in the state. But the Education Department’s estimate has been criticized by some analysts as unrealistically low.
Posted by Queens Crapper at 7:17 AM

Not with my tax money!

I can't even afford adequate health insurance and I'm a citizen of the USA!

Maybe I'd have more rights if I gave up my US citizenship and re-entered the country!

From the musical Broadway play, "West Side Story":

"Everything free in America"!

The kids involved are in a predicament, but it is their PARENTS who put them in that predicament not the US or NY govt.

Hell No !!! Reward someone for breaking the law ??

I'll vote for the dream act if the state government will reimburse me for the tuition of my 4 children who attended college. I had to scrape by, but they all graduated. P.S. I had to work 2 jobs to do it. Reimburse all the citizens first, then you can pay for the illegals (criminals).

I would invite everyone of you to read more on the current version of the DREAM ACT. These kids are home and they are not the ones who broke the law it was not their choice to come to this country. The only thing they want is to get a post high school education and being able to pay for school, and how they do that is by applying for a job.

Illegal status is compounded by more illegal activity paid for by our tax money.

Huh? When I went to Queens College in the 90's the illegals had full federal financial aid, a stipend and a plethora of services that the rest of us didn't get. I doubt it's any different now.

Our government should stop penalizing American Citizens. Illegals should be deported. End of subject. If we stopped all the services we give them, the US wouldn't be in a financial mess. Americans are tired of paying for these parasites.

#12...the illegal aliens are in nyc because the DEM. obama administration 's Eric Holder A/G, sues states like Arizona, on the mexican border, to stop using the U.S.Constitution to stop illegals from entering the U.S.

if the stop was made at the border, the illegals would not reach nyc . problem solved.although many are reported to be asian's and muslims,as well.

one needs an I.D. for RX,to enter buildings in nyc.,at a dr's office,to drive a car, etc. but none for the election process ?
many states have people who use a dead persons name to vote often. when Vermont was exposed by O'keefe recently. HE WAS THE ONE INVESTIGATED??

nyc dumbed down citizens and comrades elected a rino mayor and 49 dem.lib/prog. city council members. they gave us citizens a SANCTUARY CITY.

when you look in the mirror ,are you guilty of cutting your own throat ?

#14 O'Keefe was investigate because the guy whose name he used complained.

give us the details . i will check them out.

If someone borrowed your name without asking - for any purpose - would YOU be civic minded?

Try these on for size:

Bear in mind that even Breitbart thought that O'Keefe had gone too far with some of his stunts. We'll see what happens up in New Hampshire, not a liberal state. Stay tuned.

And here's the story about the "Dead Voter" whose name O'Keefe used:

Rather than proving voter fraud committed by someone else, O'Keefe may have done it himself.

your tax money goes to wars and military and corporate welfare--

Why complain about education for immigrants who work hard just like your parents?

I cant afford insurance which is why I want so called Obamacare even though its not perfect its a step forward out of the corrupt status quo.

Jobs are hard to find but not because of immigrants because jobs are outsopurced overseas and teh big corporations (including Big Oil) continue to rake in record profits.

Your Republicans are not going to change that.

Regarding immigrants-- they bring in money, letting them move on with their lives makes sense --we all benefit. There are other ways to secure the border or ensure that the system is not overwhelmed.