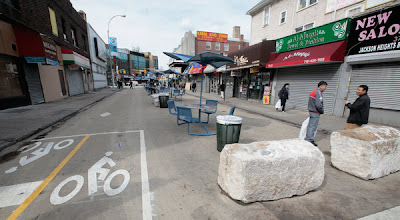 Without car traffic or the Q47 and Q49 buses that used to stop on the block, many merchants claim business has fallen by at least half. Park advocates say the recession is more to blame. But even during the economy’s darkest days, says Raj Bhalla, who sells cellphones, Jackson Heights was largely spared, because of the bustling business of East Asian people drawn here for products from their homelands.

Mr. Dashti says he has been fined by the Sanitation Department for picnickers’ litter. On a recent Thursday, piles of garbage spilled from trash bags on the tables and lumped in the street, next to boxes and a broken television. Cigarette butts eddied in the gutters. Workers from the Doe Fund now clean multiple times a day, says Mr. Dromm, who spent $42,500 from his discretionary fund on sanitation there.

On a sunny morning in early March, the street was nearly empty. A few men slept at the blue picnic tables, more than one emitting a scent that made sharing a table impossible. The lounging men have become a fixture since the street closed, people who live nearby said.

One man, who gave his name only as Derek, said he began hanging out on the block as soon as the street was closed. “Rather than be on an avenue that is all active and engines flowing here and going there,” said Derek, as he paced back and forth unsteadily, “it’s calm and tranquil.”

And what's with the bike lane that abruptly ends?
Posted by Queens Crapper at 12:31 AM

derelicts sleeping in the 24 hour "AUTOMAT AND BICKFORD'S RESTAURANTS in nyc ,is the reason they closed down.

the businesses on this site will lose customers also,because of the bums, and close.
it looks like sadie kahn (D.O.T.) will not ride her bike there either.
the D.O.T. approved the building of a Day Care Center (Asian) partially in the bed of the road on Francis Lewis Blvd @42 Avenue,Auburndale.
the then CM,from Flushing ,John Liu was Chmn. of the Transportation Comm. His Flushing landlord owns the daycare center. ???????

Another stupid idea by NYC officials

I love visiting Jackson Heights. The sights, smells, the open air markets gives me the feeling of a budget trip to India. I also realize that I'd rather put a 45 in my mouth then actually live there. It suffers from all the typical NYC maladies, crime, filth, double parking, noise, etc. When you don't live there NYC is a great place to visit. Living there (as I did) is a whole other story. Long live Queens Crapper! Long live Israel! Death to Assad! Death to the Palestinians! Death to Iran!

"Long live Israel! Death to Assad! Death to the Palestinians! Death to Iran!"

Israel? The same Israel that INTENTIONALLY attacked the USS liberty 50 years ago to incur between the United States and at their enemy at the time, Egypt?

Death To Johnathan Pollard, Death to Benjamin Netanyahu and death to Israel.

those shop owners never picked up the litter in front of their stores never ever -- so now all of a sudden they are complaining who are they kidding --they are a bunch of slobes -- and how come sanitation doesn't give them tickets!!!!!

To anon 5 thanks for responding to my long live Israel comments. I am a Christian and I have been volunteering in Israel for the last few years, you ought to try it! The Liberty was a tragic accident, regrettably with loss of US soldiers lives tragically taken. As a Viet Nam vet (USAF) I can assure you that Israel is a great US ally. When Iran ignites WW III you'll thank Christ in heaven for Israel. Sticking to the topic though I love visiting Jackson Heights. The vegetarian Indian cuisine is simply fabulous. May our Lord & Saviour Jesus Christ grant you the strength and insight to see your terribly flawed logic. Long live QC! Long live Israel! Death to Assad & Iran!

The block looks like a bombed out street in Beirut. Disgraceful. DOT are clueless idiots.

“This is a business place, this is not Times Square where people come from all of the world and sit there,” said Javed Chaudhry, who sells phone cards and accessories at GRB Distributors. He recalled feeling a mounting dread as the boulders rolled in. “I knew I was going to lose my bread and butter,” he said."

absolutely ridiculous.. "This is business"....Shitty, third-world business... Oh NYC how low you got..