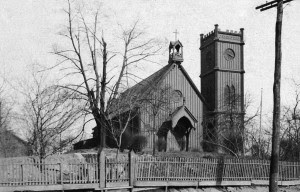 A landmark without a home now doesn’t even have a temporary home.

St. Saviour’s Church, a historical building that civic leaders saved from demolition, is deconstructed and in storage. Activists have dreams of rebuilding it at a new site, but for now, it needs to find a new holding tank before it finds a permanent site.

Galasso Trucking has stored the labeled beams and pieces in warehouses in west Maspeth. But now they need the room back.

For decades, the 1847 Carpenter Gothic church stood on a hill on Rust Street in Maspeth. When the owners decided to redevelop the property, Juniper Park Civic Association (JPCA) leadership convinced the owner to let them disassemble the building and find new land for it.

In the meantime, they labeled the pieces of the building and stored it in two trailers.

Those trailers have sat on Galasso Trucking’s property for more than three years now.

JPCA President Bob Holden led the charge to save St. Saviour’s from the wrecking ball in 2008. He said he was thankful for what Galasso has done, but he’s now in a bind.

“The owner certainly has been most gracious,” said Holden, president of the JPCA and Save St. Saviour’s Inc—an organization formed to take donations on the church’s behalf.

He and other advocates have been holding out for parkland to rebuild the church.

But in November, the Parks Department dropped a bid to acquire the church’s original site.

Time to set the record straight. Parks didn't drop its bid. Elizabeth Crowley decided it would be easier for her to go after a much smaller piece of land, so she pulled her funding out from the St. Saviour's park project and hasn't done a thing with it since. 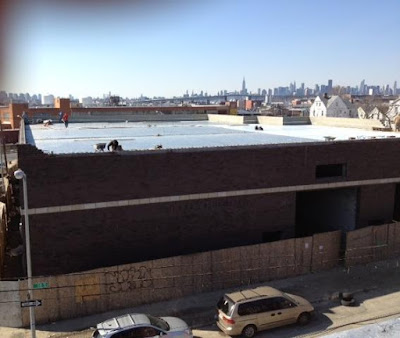 Can't hurt to ask and might be a temporary fix.

Jesus Christ, what a disgrace.

Aside from f-----g with Brian Mc Laughlin, WTF else has she done?

Maybe I should post my videos of Liz repeatedly entering and leaving Brian's district office.

I live right above the store.

Who'd wanna film those two clowns even if I lived above the store...which I don't.

If I only had that kind of video (sigh) I could have offered it to Brian for a price or a very cushy job at the Central Labor Council.

Building warehouses in 2012 in an area where the manufacturing left therefore the need for warehouses left decades ago. The area has a unrented surplus of warehouses.

I really think this was all done out of spite. The developer (as all developers do) desperately wanted to build high density residential on the lot but couldn't pull the strings to do so -- and against economic common sense built an economically nonviable property rather than selling it to the city for a park. We are sure to see this flip or go to a tax auction in a few years.

First it was Manton followed by Crowley...with shades of Mc Laughlin thrown in.

Sounds like she's good at f---ing people. Nothing else.

Can you impeach or fire a City Council Member? If she worked for private industry, she would have been fired for being so incompetent and not doing her job. Do her constituents have any recourse? Just asking.

Why not a re-assemble the church on the roof of the new building? Then surround the area with vegetable gardens like they do on that building in LIC. How much would that cost? It certainly would be innovative.

Dizzy Lizzy only cares about self promotion. She's the worst thing to happen to Maspeth since the Long Island Expressway cut us in half.

Why not a re-assemble the church on the roof of the new building? Then surround the area with vegetable gardens like they do on that building in LIC. How much would that cost? It certainly would be innovative.
-----------
In a few years those roofs will start to leak. The whole thing is a gimmick. Roofs were never designed for that treatment.

And she wants to run for Congress?

Maspeth and Middle Villagers- do the right thing. When Crowley's petitions come to your door, tell them where to go! Keep her off the ballot.

Elizabeth Crowley is too dumb to even realize her limitations such as talking, reasoning and thinking.

Her talent lies between her thighs

It's who you know and who you blow.

Did I get that right uncle Joe?

Nobody here ever thinks out of the box.

You could have had a park with the church on the roof.

Hey, it's Queens the Land of Crapola Crayons.

Now she wants to be your congressperson, and I dont doubt that you will elect her.

Joseph Crowley does not care about Americans and neither does his niece. I will never vote for either one of them.

Why don't they shove the trailers up the Crowley family's ass!

I think JVCA should invite all those eager young political wannabes like the Queens Young Democrats to one of their meetings and bus them to this.

Win win situation if they refuse or if they go....