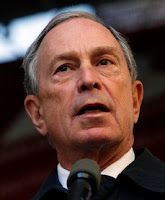 Nearly 70 percent of city residents characterize the echttp://www.blogger.com/img/blank.gifonomy as being bad. And New Yorkers are chiefly interested in jobs and low-priced goods, even at the expense of neighborhood stores. Residents of the Bronx, for example, favor Wal-Mart’s long-frustrated efforts to establish a store in the city; 79 percent liked the idea.

According to the poll, 45 percent of New Yorkers approve of Mr. Bloomberg’s performance, down nine points since the last Times poll, in October 2010.

Forty-three percent of New Yorkers disapprove of the mayor’s performance.

The NY Times recently honored their first publisher, who wouldn't kowtow to Boss Tweed. My, how things have changed.
Posted by Queens Crapper at 12:53 AM

New York City is the best city a mayor's money can buy!!! Anyone wanna bet he's gonna try for a 4th term?

not only is the nyc economy dismal,but the spending decisions are insane. eg. Planyc was a disaster . sibling tree after tree has died.

school yard to park conversions were poorly planned and are mostly sitting spaces with benches/trees,when exercise sports spaces for teens should have had priority.

I told you I would save the city---for my rich buddies!

Many of you voters also re-elected those crooked, cowardly city council members---who didn't stand up to hizzoner---thus allowing him to steal his 3rd term!

In a republic, you get the government that you vote in.

Bloomberg is certainly enjoying his at your expense.

Yeah, I'm really broken up that we don't have Weiner, or Al Sharpton, or Hevesi or one of those other crooks, clowns, or "Reverends" as Mayor. Bloomburg is just so terrible compared to them.

Of course they want a WalMart and look at the min-wage jobs as a bonus. When you fill the city with the unskilled and the uneducated, those are the jobs they are going to be looking for.

Were you one of the guys who were saying "He's going to win, so let's get behind him" before the last election? The people you mention weren't running the last time.

the city council is controlled by a majority 49 liberal/democrat/progressives and a minority of 4 conservatives.

that is dictatorship and no chance for "ADVISE AND CONSENT" government.

Sharia Law is a done deal eventually with our "leaders" advocating "A SANCTUARY CITY".

as long as the politicians stay "money launderers for the public unions", you lose your freedom and pay for their philosophy.

Its funny, this guy is here because of City Council.

That is where you should direct your ire.

But you will not. They throw ice cream money at you and you morons look the other way.

And people, because of that, they all laugh at you behind closed doors.

After Liu becomes Mayor, we'll be looking back at the "good old days" of Bloomberg.

Damn straight, Snake! I hear that there are some city coffers I haven't raided yet!!! I just need a little more time...

The worst mayor since Lindsey, maybe worse than him. He rode Rudy's coattilas for almost two terms. Too bad so many of you are just catching on!

he won't have a 4th term,quinn's coming in as another part of her deal with him.

Can't wait to see him goooooooo