Jennings at it again 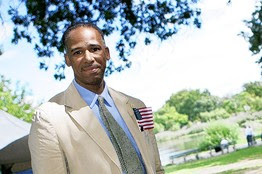 Former Queens Councilman Allan Jennings is still on the hook to New York City taxpayers to the tune of $45,000 for committing an array of campaign finance violations.

But that has not stopped the veteran pol from racking up a number of questionable new expenses in his campaign to unseat Councilman Ruben Wills, even as he racks up support for his uphill campaign.

On May 9, for instance, Jennings tipped a waiter named Pasquale Gattuso $100. Jennings’ filings show no expense for any meals that day, though did pay $350 for “fundraising,” potentially for a catered event.

He also spent $29 that day for a “meeting” at Shipwreck, a South Ozone Park business listed as a tire dealer and auto repair shop, one of five such “meetings” at the dealership.

Jennings has also frequently held “meetings” at gas stations from Queens to New Jersey, racking up charges as high as $75 for a single one.

Not that Jennings is going hungry, charging frequent low-dollar “meetings” to his debit card at various fast food establishments in Queens, from KFC to Cold Stone Creamery to McDonald’s.

Jennings, who did not return phone calls seeking comment, is barred from receiving taxpayer matching funds in the four-way southeast Queens Council race because he has not repaid his $45,000 debt. Still, city rules would not allow Jennings to use even privately raised campaign funds for personal expenses, said New York City Campaign Finance Board spokesman Eric Friedman.

On top of the $45,000 owed to the CFB, Jennings also owes $5,000 from an unpaid fine levied by the City Council over Jennings’ sexual harassment of female City Council employees.

City Council races always attract the best and brightest.
Posted by Queens Crapper at 12:59 AM

How much does Joe Kasper pay his paralegal?

Imam Charles Aziz Bilal. $25 for a hooker? Alhamdulillah and Peace on the Prophet! Deflation is in the air. What's next $2/gallon gasoline?

While Justin Wax Jacobs is knocked off the ballot, the party bosses allow Allen Jennings to run again and again unchallenged. Why aren't his petitions challenged?