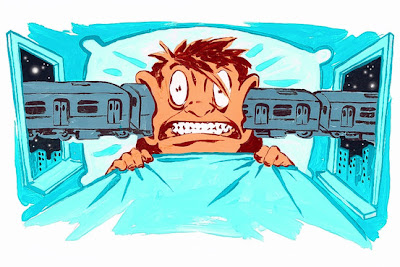 Head to Queens Plaza South and 23rd Street in Long Island City for a symphony of sounds: cars whizzing off the Ed Koch Queensboro Bridge and three above-ground subway lines converging, the No. 7 train squealing above all as it makes its way around a bend. Metal tires grinding on a metal track: It's like nails on a chalkboard times 10.

Benjamin Sachwald, a sound expert, grimaces. He is director of acoustics, noise and vibration for AKRF Inc., a consulting group that helped revise the city's noise code when it was last updated. (He is also a former heavy metal rocker who plays the drums with no shoes on. He's looking for a new band.)

Mr. Sachwald meets me at Queens Plaza South and 23rd Street with his trusty sound-level meter, a handheld digital instrument he has used in hundreds of locations across the city over the past seven years to determine the magnitude of noise levels for myriad projects—luxury high-rises, office buildings and even schools.

He holds his instrument up for a reading. At the peak, when the train is lurching around the corner, the reading is 93 to 95 dB(A). (In sound engineer speak, that is A-weighted decibels, but let's just call it decibels from here on out.)

To give you an idea of how loud that is, a rock concert comes in at 120 decibels. The threshold for pain is about 140 decibels. 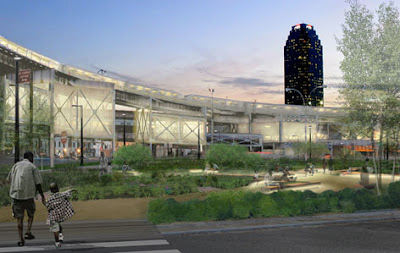 That's funny, I thought we were spending ~$40 million dollars to transform Queens Plaza into a park where people would take leisurely strolls and quiet lunch breaks. A place where cosmopolitan-type folks will come from far and wide to shop at stores and gaze at millstones.

You mean that was all a crock of shit?
Posted by Queens Crapper at 12:55 AM

"a rock concert comes in at 120 decibels"

Where is this guy getting his numbers from ?.
Out of over 100 shows I worked in the past only 2 people that peaked 120dB. Those 2 were Motorhead and John Entwistle of The Who. That was within 10 feet of the house PA stacks indoors (A weighted)

LOL....
what a "perfect" spot to buy a "luxury" condo....especially if Pistilli built it.

The city is building a kiosk at the foot of the bridge where they will offer earplugs and air masks. Eventually the kiosk will be converted into a toll booth when the city realizes that nobody is using the park

As we have said here before, Penny Lee of City Planning (a non Queens resident?) is certainly went on record plugging this as well as the sea of broken concrete that has been come a garbage magnet.

How about the cars that are plowing into the stores? Litigation so lets not got there.

We need someone in City Planning that will plan communities for the people that are actually living there (what a fresh concept) rather than speculators half filling buildings with expat drones.

BECAUSE THIS IS QUEENS AND QUEENS CIVIC CONGRESS WILL ONLY 'SUGGEST' YOU DISCUSS IT WITH YOUR ELECTED.

Glad to see Callous Caroline Baloney Maloney is funding this.

Saw her on TV fighting for the residents of the East Side against a transfer station.

When I see her in Queens all she ever has is a friggen shovel in her hand digging up dirt for a developer.

This place needs a ton of money to maintain it - have you seen all the plants and street furniture they are putting in here?

Give it a few years, a deep recession, and scaled back maintenance.

It will look like crap. Everything dead, the furniture covered with graffiti and chipped and the plaza a dirty trash strewn mess.

Your Western Queens social experiment is a failure. Can we please have QP's the hookers, the gaudy parking building, the industrial buildings and the Dublin Bar back? Oh and please throw in the QUEENSBORO Bridge as well. At least back then, the plaza was what it was, not pretending to be something it isn't.

It will look like crap. Everything dead, the furniture covered with graffiti and chipped and the plaza a dirty trash strewn mess.
-----------

Oh, no, that will not happen until the buildings are filled with gullible tenants.

When you take the train by, or drive through, take a good look. A lot of your taxes are going into the Plaza.

Now whose services are getting scraped to the bone in a cash starved city to fund this - yes, now you get it ... who is benefiting from this at your expense.... and why should they?

At least back then, the plaza was what it was, not pretending to be something it isn't.
\\

Yes buster, I bought into one of the new buildings in Dutch Kills. Had a great view until some #$*^# built a building in front of me.

Still have the train noise, though. Sounds great bouncing off that building - echoes of sirens are pretty nifty in the wee hours of the morning too.

Beware people. You will get rooked like I did.

Same thing happened to me - i had a nice view of the city and they built a building in front of me.

The new buildings not only bring more traffic, but now funnel the noise from the Plaza down the blocks. Dutch Kills is a lot more noisy now.

We thought the new zoning would bring families to our community and all its brought are transients.

A lot of long term residents are now thinking about moving.

Maybe its me. I pass through there on the N/Q train everyday. I see the new buildings and wonder why someone would buy there. I see all the new buildings with their balconies facing the city. You know what else I see? Vacant lots, and low scale buildings right across the street. Sorry guys, I have no pity for those complaining about loosing their city view, and being taken in by crooked agents or developers. The signs were there. Did you think your buildings would be the only ones to go up in that neighborhood? Also, chances are your buildings blocked the views of others. Sorry it didn't work out for you guys, but honestly, all you had to do was look down to see the low buildings instead of looking straight to the city.

I guess the big question is with library cutbacks, under staffed schools, hospitals closing, why our politicians think $40 million should be spent there.

Let the corporations and developers pay for it. They are benefiting from this not you or I. This landscaping is a boondoggle that will not last three years in this city in that location.

Our politicians have a questionable priorities. Those that support this should answer this question.

Why the hell will the borough them THERE?

I can't think of anyone with a grain of sense seeing how they already suffered in the Plaza would do something like that.

2011 Census read that Long Island City has the biggest group of young professional females moving into that neighborhood.