He'll go down with the ship, if necessary 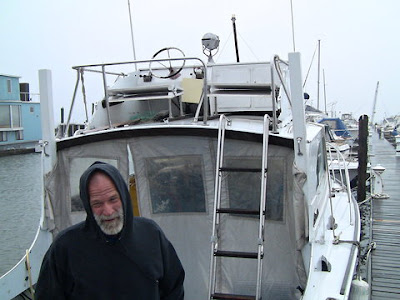 On Sunday morning, as New York City was feeling the brunt of what had become Tropical Storm Irene, Billy Drankwater, 57, was leisurely buttering a piece of white bread, in the cozy, dry cabin of his 33-foot wooden boat, docked off the north shore of Queens, in Flushing Bay.

Mr. Drankwater lives on this old fishing boat year-round, with barely the cabin space to extend his long, taut arms, or stand erect at his natural 6-foot-2 inch height.

As hurricane warnings grew, over the past few days, Mr. Drankwater ignored friends who urged him to batten down and move out.

Well, it looks like we dodged a bullet this time.

Although there were quite a few trees that didn't make it, and if you believe the news reports, there are 32,000+ people in Queens without power.
Posted by Queens Crapper at 12:39 PM

The number of downed trees in Forest Hills is nothing compared to the amount the tornado took out in September. Maybe one every 15 blocks or so, as compared to one on nearly every street.