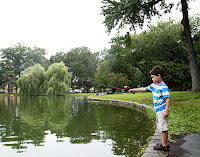 Something fishy is going on at Bowne Park in Flushing.

Local residents say turtles that live in the park's pond have been disappearing at an alarming rate and that the park's fish population also has plummeted.

"I've been hearing from people who noticed there are no turtles sitting out in the sun," said Wanda Beck Antosh, president of the Bowne Park Civic Association. "They have also caught people poaching fish and turtles from the pond and not putting them back."

The turtles are popular with park visitors, who sit on surrounding benches and watch the reptiles glide through the murky water. A stone turtle statue, a favorite of neighborhood children, stands sentry by the side of the pond.

Some days, it is the only turtle in sight.
Posted by Queens Crapper at 12:45 AM

Can't find any live octopi in there! :-(

Poachers grabbing and trapping at night.
Turtle "parts" and soups are no doubt a delicacy at the "Asian" markets in Flushing. Good reason 1/2 those food stores in Flushing don't want American patrons
Die hard Turtles and Coy just don't disappear.

Coyotes and foxes will dig tortoises out of their burrows to eat...if so "evidence" and big holes would have been found.

The once great North Flushing is slowly turning into a third "turd" neighborhood. It's overpriced and the bubble will pop soon.

The turtles are not mysteriously disappearing!

A friend and I originally called 911 when we WITNESSED people taking them out of the pond. The next night fish were being removed. We've also heard that squirrels are being killed.

Catch and release fishing must be banned - there's nothing sportsmanlike about it. We don't need mobs of people sitting around the pond at night killing wildlife.

Oh - and when we asked the people to put the turtles back, they became abusive - that's when we called 911.

It's AGAINST THE LAW to kill wildlife in a NYC park. Call 911 when you even think you're seeing it! We need arrests!

It's easy to say that turtles and fish don't matter and that the police should only focus on crimes against humans, but all of the beauty and civility that's left in NYC, and especially in Queens, is eroding, if not gone.

It has become a harsh, ugly place in which to live. It's so bad now that you need to fight to hold onto anything good.

Bowne Park usually looks like shit and the pond is filled with garbage, but every so often you see a family of turtles sunning themselves and have a reason to momentarily feel good about the place.

Without them it's just a dirty, weed-filled, flooded public space filled with people spitting on the ground!

How come the article fails to mention exactly where teh turtles are ending up??? They know where. We know where. Why hide the truth???


You bring in tens of thousands of farmers from the middle of nowhere China and people act surprised when they don't know how to act in civilized society.

What happened after you called 911?

I agree something should be done, but I don't think the NYPD is the agency that should get saddled with the burden. If myself or any of my family or friends ever needed the police for a serious emergency, I would be pissed to learn that their response was delayed because they were dealing with turtle poachers in a pond.

The same thing is happening in Kissena Park.

Flushing... where the third world meets your world.

When you call 911 about an animal issue, they route the call to ASPCA police, not the NYPD. If it's in a park, they may notify park police, not that there's any left.

FYI
Turtle Soup being served for lunch at the North Flushing Senior Center! Come on down. Don't be coy.

Passing the buck. No one wants to take responsibility. You telling me that a NYPD patrol car can't drive by the park? Are you kidding me?

That's because there are groups of teenagers fishing in the pond- destroying wildlife including turtles, frogs, fish, and even squirrels. Call 311 and complain to the parks department, like I did. Also, if you happen to be there when it is happening, you can call 911 to alert the police as well.

Bowne Pond just the past winter suffer a Winterkill, if you even know what that means. Let me explain it happens when the water surface gets frozen and there is not enough O2 exchange between the Air and water and fish will die.. due to lack of O2 in the water.

Deputize the bocce players from the other end of the park. I wouldn't mess with those signori. Capisce?

"Oh - and when we asked the people to put the turtles back, they became abusive - that's when we called 911."

Good for you! What time did you witness this!? I am in park very frequently. I'm very glad that I read this article.

NOT ON MY WATCH will any animals be abused either!!!

I saw teenage boys fishing the other day - there were about 6 of them.

Were they young? What race? I plan to alert the bouce players as well perhaps will a handout to people in the park . . .

I do though agree with the other poster about turtles and fish for that matter being killed off by Mother Nature rather than by people.

As far as the Asians go Joe - there are many Asian people in the park who are very respectful of the wildlife - in fact we should all be treated the way most of them treat their dogs!

Give me a break, that's a puddle, not a lake! It isn't even knee-deep. What mother nature has forgotten, the developer tried to stuff with cotton. Typical of the egotistical junk folks live in around here and pretend to seek histrionic preservation for!

I'm going to go out on a limb here and guess that this is being done by the beloved members of the vibrant and diverse flushing area.

they should install cameras - Bowne Park Civic Association should know about this BTW.

IF it is true of course. Even if it's not - there truly should be cameras.

The fish population decrease not mainly because of poaching. I mean I know people probably poach there. But I actually fished there a lot last year, I do catch release all around local lakes and ponds in the city. Last summer there was a major fish kill due to the heat wave at bowne park, also during the winter it had a winter kill. Fish were found frozen in ice around the lake. All that's left in the pond is a few turtles, carp and some sunfish and bass.

"That's because there are groups of teenagers fishing in the pond"

"Groups" of teenagers is an exaggeration - I saw a group of 6 the other day fishing . . . they were NOT Asian or Spanish, etc.

I thought it pretty odd at the time - then I saw them the next night too. Usually you see someone with their young kids teaching them how cast or a fisherman with a pass here and there who baits and releases.

They are fishing most likely without a license - call Alley Pond Park for advice.

How can killing wildlife be against the law when the mayor authorizes the gassing of thousands of birds, and not just the Canada Geese; also Swans, Mallards, etc.

If I see anyone poaching I'll kick their ass right into the drink!

You'll find it all in column A or B at your local Asiatic restaurant along with various other mystery meats and local road kill!

You should see those little Oriental guys scampering about in their restaurant checkered pants....catching sea gulls with baited fishing poles at Ft. Totten.

Then there are those Fujianese peasant women squatting by the curbs....picking plant life that's been peed on and polluted....and later selling it to Chinese eateries.

Wadda ya think you're getting in those cheap $5 "lunch specials" folks....fillet mignon?

I wouldn't trust any Asiatic, Oriental fare in Flushing that's served to us "round eyes".

Once you mince the ingredients up that small, you'll never know what you're eating.

The fishing should be allowed one month or at least ban barbed hooks. A good 1/2 those fish caught and released die within hours or even days.
You have people using barbed and "split barbed" tearing the fishes mouths apart removing.
Some fish even swallow the hooks, then guess what happens to them ?

Most those people and kids fishing don't know what they are doing.
Oh I wasn't kidding about the soup. Its actually called "turtle shell soup".

Many of those off the boat Asians believe it cures anything from arthritis to erectile dysfunction.

Carol you got that right- many Asian people are very respectful of wildlife treat their dogs like royalty!
In Little Neck I saw a woman wipe a dogs behind then tossing the paper and leaving the poop in someones driveway. I went ballistic. She picked up her little white rat and ran away.

Its is US Americas and our culture that are treated like garbage, no respect at all. I base my comments by people actions. From what I see and experience **most** these people do not want to be Americans, they want colonize and behave like lawless locusts.

joe, of course they don't want to "become American"

who ever did want to become American in all the centuries of immigration?

Only those who seek to benefit from it, right?

I know a lot of people are fishing these waters and I don't mind it as I've done it as a youngster as well and occasionally take my daughter there to fish here and there. Most of the people that are fishing there with rods and reels aren't there to keep the fish(that's gross the water is filthy), and they usually have the utmost respect dor these creatures reguardless of age. However I have witnessed a few people with nets at night in Kissena park poaching 3 nights in a row. I've notfied the authorities all 3 nights and not a single car came by, all 3 nights. It shows how much is being cared for in our parks. I have however stopped them with my flash light, saw them running out the water with the quickness. I'm not sure what's going on with the turtles but the fact that the Asians are being blamed and being called savages from a 3rd world country is uncalled for. There are little children there that I've seen that take turtles out of the water that want them as pets so who's to say that isn't the case. Just saying authorities need to monitor our parks better and you can't just go around blaming a specific race because of stereotypes, that's called being racists and now that's being a savage from the 3rd world