Scratch-n-sniff your way across the city! 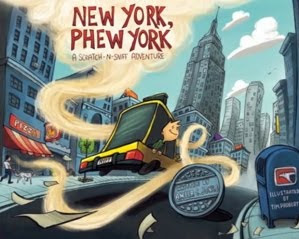 New York City is known for, among other things, well, how do we say this, its scents – both the good and the bad.

36-year-old Amber Jones was walking home from work one day when she was inspired.

“I was like, ‘Oh gosh, that pizza smells so good.’ and right as a I was walking, I was wearing flip flops, I stepped into horse droppings,” she says.

So, she decided to create a book called “New York, Phew York: A Scratch-N-Sniff Adventure.”

Do ya think I made the cut? After all, I smell like someone cut the cheese!

There's nothing like the smell of uncollected garbage on a muggy summer Monday morning. Perfect way to start the week.

"Amber",
you could dedicate 3 whole chapters to Flushing alone!

I will put it with my pet rock and my chia pet.

You won't have to scratch to sniff when "granny" Shulman appears for her next Willets Point photo op.

I don't know how her partner, Wellington Chen, can take it!

That "scent" ain't coming from the Flushing Creek....even at its lowest tide!

I must confess...I love the smell of napalmolive in the morning. I never feel clean without it! Neither does ma!