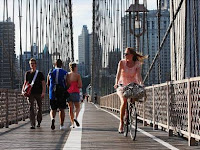 Nine days ago, we published an open letter to Sadik-Khan pointing out what was going on. That provoked uproar among cycling activists who contended that we had labored under a misimpression and invited us to visit again.

We did so and discovered that Sadik-Khan had sent staff to the bridge to prevent cyclists from entering the walkway. Her office said that such vigilance is common. Hmmm, we thought, and returned unannounced.

During the evening rush of 4:30 p.m. to 6 p.m. on Thursday, at least 74 bikers zipped along the pedestrian side of the bridge, which, due to the presence of construction sheds, is narrowed to less than 50 inches in places.

At the peak of the evening commute, at 5:45, about 40 bikers invaded the pedestrian lane, overwhelming the dozen or so walkers.

The transgressors were young and old, tourists from Asia and hipsters from Bushwick. They were united in breaking the rules and nearly doubled the number of pedestrians who used their own lane during the entire 90-minute period.

We asked a biker why he violated posted signs. He answered, "It's easier," than using the DOT-mandated route that will be in place until construction is complete, probably in January.

Oh, and it turns out those polls that showed NYers are overwhelmingly in favor of bike lanes were bogus.
Posted by Queens Crapper at 12:27 AM

Crapper - I walked over the "pedestrian lane" of the bridge on Monday at about 5:30 p.m. I counted 25 cyclists from the time that I walked onto the bridge on the Manhattan side (and past two DOT employees giving out literature to cyclists) to when I got to Brooklyn. What DOT was doing, between that and the barricades, was completely ineffectual.

Helmets are not mandatory in NY. Cyclists are free to split their heads open and become vegetables.

Dear lord why can't we just accomodate each other and the hell with all the regulations? Make nice, respect your fellows. These problems are expereiced by both groups: pedestrians in bike lanes, bikes in pedestrian lanes - the solution is not regulation, which just serves to tick off both sides. The solution is human decency.

as Crapper pointed to, i believe the the rule is Over 14: No helmet and can't ride on the sidewalk, under 14: sidewalk OK but must wear a helmet.

That picture in the second link about the flawed polls is interesting. The mom cares enough about her daughter to put a helmet on her but then they ride the wrong way on a one way street.

It just goes against the entire worldview and entitlement of a biker to go slower than the coasting speed of the bike -- merely to have the control to avoid hitting a pedestrian. The natural downhills of the bridges are places where the bikes can speed up to 30 or 40 mph - pedestrians be vigiliant - or be injured.

Queens Crapper does it again with another fact-free post.

Polls and reports of observations are not facts?

At least Sadik-Khan and her staff are consistent when caught making up their own "facts".

That's why bicycles have this piece of equipment called "brakes." They are there to be used.

Beyond that, pedestrians have the right of way. Bicycle riders are supposed to watch out for pedestrians and obey traffic laws. In the case of the Manhattan Bridge, a lot of these guys are riding where they shouldn't be riding.