"IN VOMITUS VERITUS ? (Is there some truth to be found in puke?)

Whose version of "THE TRUTH" shall we believe?
What is the REAL future of Flushing to become during the next decade?

TDC Rockefeller, represented by Michael Meyers, will someday (if the economy ever improves) insists that they will be building the "upscale" Flushing Commons project over the bones of Muni Lot #1....provided they can ever get their needed overseas investors to fund it.

From Mike's lofty perch....high atop TDC's "Queens Crossing" headquarters (right across the street) all looks rosy and bright. 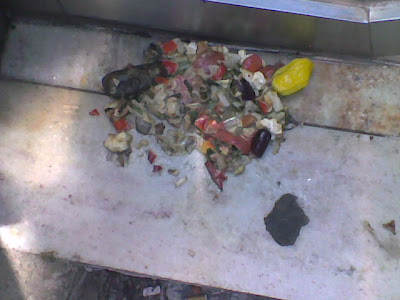 Here, it looks like some unhappy diner just returned his dinner....and right in front of the restaurant he just exited.

This is surely not a pretty site....and it's not uncommon. 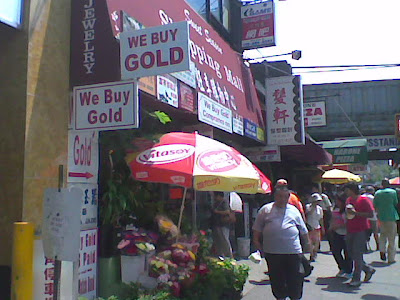 Neither is the shabby looking view of "VIBRANT, BUSTLING" Main Street. 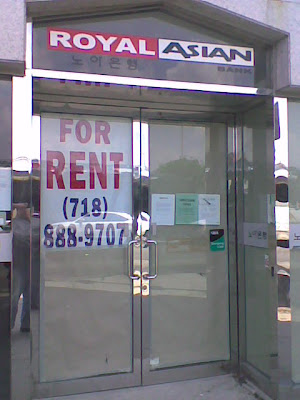 And along the south side of 39th Avenue....we feature these 2 vacant retail establishment, neatly in a row, just past Lippman Arcade. 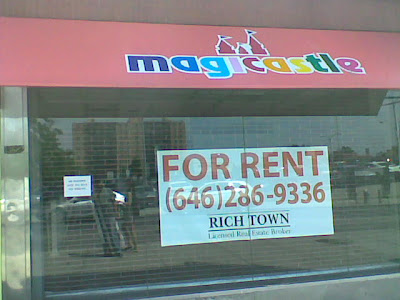 I'm straining my cardiovascular system, as it is, by laughing so hard!"

- The Flushing Phantom
Posted by Queens Crapper at 12:18 AM

"Magic Castle" opened around 1999 -it's lease was probably up and the leech bit too hard.

Where I live on the upper east side of Manhattan there are a -lot- more vacant stores per block than what I see out in Flushing...or most of the areas in Queens I visit regularly.

"..provided they can ever get their needed overseas investors to fund it."

Why the need for foreign investors? If it is viable there shouldn't be any trouble in finding domestic sources..in a few years.

If not, they'll get screwed as the Japs were when they bought Rockefeller Center in the late 80's. TFB.

Things are starting to move again in Manhattan, so Queens projects should follow soon enough.

WENEED MORE RETAIL/BUSINESS SPACE!But if you need a place to live,there's plenty of room(s) on roosevelt and college pt. blvd.........a true happy ending!HAHAHAHAHAHAHAHAHAHAHAHA

Make that THREE vacant retail establishments in a row, just across the street from Muni Lot#1.

I just spotted another "for rent" sign on the south side of 39th Ave.
east of Lippman Arcade.

It looks like Korean businesses are leaving in expectation of a Chinese invasion!

Congrats on making this story so completely inside (and overly sarcastic) that you are the only one who understands it. The issue has something to do with development on Main street, Flushing? The street is dirty? Tacky? Join the club-- like the rest of the City in this decade. The sooner we downsize to 1972, the sooner the recovery can begin. No one wants to believe that, though-- no one-- not billionaire bankers, not Joe Blue Collar. And so we will continue to drift down for the next 10 years until we reach bottom.

We hope you're taking note of all this, Ms. Myra Baird Herce of the "Flushing Chamber (Pot) of Commerce".

It's you who's missing the point of what you call an "inside...overly sarcastic" story that practically everyone else living in Flushing understands only far to well.

The bottom line is that
Flushing stinks....both physically and for major future financial investment!

The star is losing it's luster.

Those spin doctoring pundits like the Flushing BID, Flushing Chamber, TDC, CB#7, developer Michael Lee, etc. have been busy spending thousand of dollars pushing their fairy tale....hoping that us residents and any investors out there will believe in it.

In the worldwide scope,
Flushing is no longer the best area to put money into in expectation of recouping a grand return.

Their IP addresses prove it....and they're no dummies!

The main thing to remember is....
that NYC just handed over a most valuable piece of real estate, Muni Lot #1, for development purely on spec.

Now,
Mike Meyers has to huff-n-puff wheeling around a Dim Sum cart for his Chinese masters trying to find investors for the Flush Con project overseas.

TDC Rockefeller HAS ALREADY STATED IN THE PRESS that IT IS seeking overseas investment.

That's, obviously, because there are NO LOCAL investors willing to risk biting this big fiasco!

There is no possible way that is vomit. The Olives are still in perfect shape, you can clearly make out the red/purple onions although the green peppers looks to have been eaten and regurgitated.

There is no possible way that is vomit.

That's dinner for two at one of Flushing's choice eateries.

You all Know who is responsible for this, CB7 ! John Liu's favorite Community Board and where Chuck Appelian,Gene Kelty,Marilyn Bitterman and Paul Vallone hang their hats. Vote against all incumbents and insiders, Write in your vote next time up.

I love it! A picture IS worth a thousand words. This is what they have turned the venerable old city of Flushing into in just a couple of decades. Thanks CB7!

The issue has something to do with development on Main street, Flushing? The street is dirty? Tacky? Join the club-- like the rest of the City in this decade. The sooner we downsize to 1972, the sooner the recovery can begin. No one wants to believe that, though-- no one-- not billionaire bankers, not Joe Blue Collar.

Wow what a rant - NY's answer to the Tea Party nutjobs.

The point is that Flushing, once a nice town is now the poster child for everything wrong with Tammany Hall.

Its a slum - and unless something is done soon, it will start to approach the Third World.

Stop the bullshit of Vibrant! Diverse!

Hey that "little mall" shop in the first image next to the LIRR overpass is where I bought my $25 Rolex, LED Yo-Yo and lucky sox !

FLUSHING IS A DUMP PLAIN & SIMPLE WHAT A TRAGEDY IT WAS A CUTE PLACE 20 YEARS AGO ENOUGH IS ENOUGH ITS TIME TO NUKE IT & START ANEW!!!

ENOUGH IS ENOUGH ITS TIME TO NUKE IT & START ANEW!!!

No nukes is good nukes!

what opened where the OTB was

As an avid reader of this blog, I don't take offense. I'm just wondering when you're going for that medical procedure that will remove your head from your ass.

I'll be glad to post a photo of that same "food pile" as it looked 3 days later.

It's greatly diminished since my first flick.

The rats have been enjoying quite a feast.