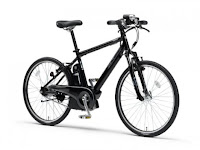 It's not clear if they're even legal, but a Brooklyn city councilman said Tuesday that electric bicycles are becoming a hazard in the city.

Councilman Brad Lander wants the city to take a close look at the bikes, which look and sound like regular cycles but have an electric motor.

Lander says it's not clear whether they should be classified as bicycles, scooters, mopeds, or motorcycles, or whether city, state, or federal laws apply to them.
Posted by Queens Crapper at 12:20 AM

The New World Order mall has some great electric bikes on the second floor.

I believe that electric bicycles could play a very constructive role in our city's transportation mix, but that those capable of sustaining speeds over 15 miles per hour for long distances should be classified as mopeds. There can be tax incentives to buy them as opposed to standard mopeds, given that they're cleaner and quieter, but they aren't true bicycles.

Bicycles with a shorter duration electric boost (a little help over hills, for example), however, should be recognized as bicycles.

There should be restrictions and penalties for modifications to increase power after sales.

They are electric motor vehicles and should be licensed!!! If they use our roads then they should obey the rules of any other vehicle. They are extremely dangerous. I nearly hit 2 with my car as they were riding against traffic and going through stop signs. ENFORCE THE TRAFFIC LAWS!!!

Great! Now when I get hit by a two wheeler on the sidewalk I can claim assault and "battery"!!!

and how are electric bicycles parked?
take up a street parking spot and feed the meter?
chained at a bicycle rack or other sidewalk pole?
any laws about this?

You guys sound like idiots. I have driven cars since i was old enough to ave a learners license. I gave that up after 8 years of safe driver status to become a biker. Though i love my motorcYcle, i have become enviro-conscious. This led me to ride the motorbike only when i need to and to predominantely ride a bicycle instead. Just recently i bought an electric bike since it feels more familiar and sometimes i have an issue pedaling because of my bad knee. Im saying all this to show that i know all sides of the game. All perspectives. Ive seen personally that cyclists all disobey the rules of traffic. I asked a cop, whether it has a motor or not: if it rides on the road, it must obey all traffic laws. Bikes cannot cross red lights and can oly make a right on red after a complete stop. the problem is enforcement of these laws. favouritism as well, i see jews in brighton beach riding on the sidewalk all the time! Besides, ive seen so many people getting hit with regular bicycles. 6 deaths this past 2 weeks: gues what? They were all regular bikes and they were doing something illegal. People on bikes are vehicles to pedestrians and must give right of way even if the pedestrian is wrong just like cars have to. Any bicyclists out there, if you want the city and the public who drive cars to stop thinking you are second class citizens, then do your part and stop disobeying the rules of traffic and be a responsible rider. And you car drivers out there, stop blaming Jeanette Sadik-Khan: its not her fault, its those sh*thead bicyclists out there!... Lets do our part to further green transportation instead of hurting it!