People made to move, lots left to the rats 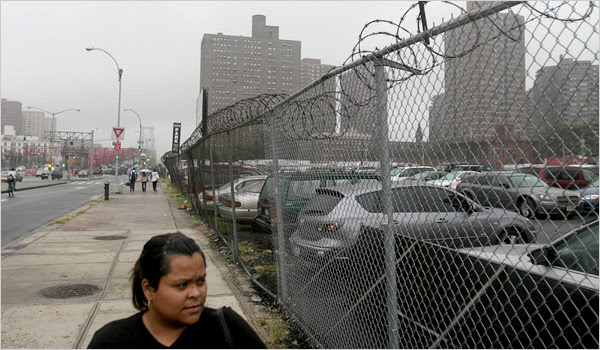 “Forty years without doing anything,” she said. “We had to move and everything was knocked down. Why? So the rich can move there now?”

Forty Years of Growth, Except Where It Was Expected

Emptiness has been the one constant for the five remaining city-owned parcels in the Seward Park Urban Renewal Area along Delancey Street, near the Williamsburg Bridge. At a time when the city has few lots to build housing for low- and moderate-income tenants, the five undeveloped parcels are an incongruous sight, especially since officials and advocates considered them the biggest patch of vacant city land in Manhattan.

Photo from NY Times
Posted by Queens Crapper at 8:37 AM

The way Bloomberg Inc. sees it.....
city owned vacant land in Manhattan is worth a bundle and poorer/middle income people
are worth SHIT !
Mike's administration has proven that to all
and very well indeed.

The Doctoroff doctrine is this:
Get rich quick or move out
where land is worth less or completely worthless.

It should be said that there is controversy as to the development of these parcels. The fact is there are already many thousands of subsidized housing units within a half mile of these sites, perhaps the highest density of low income housing in the United States. No one doubts the need for more affordable housing, but there need to be some limits on how much should be jammed into one neighborhood.

"...there need to be some limits on how much should be jammed into one neighborhood."

The same could be said for luxury condos.

"...there need to be some limits on how much should be jammed into one neighborhood"
"the same could be said for luxury condos"
I think both sides are in the right here, why not develop the sites as parkland?

With the yuppi-fication of the Lower East Side
nothing will be affordable in the next 10 years.

They will probably even turn
the Hamilton Fish housing
into market rate condos similar to what was done
in Stuyvesant Town.

"Parkland".....what a great idea and a perfect location !