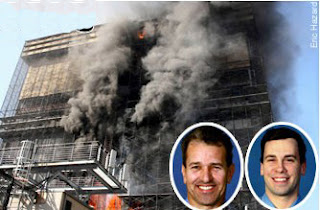 General contractor Bovis Lend Lease's construction plan called for the 41-story skyscraper to have a working water source throughout the demolition.

"They were responsible for having water in that building and for keeping it free of combustible materials," a fire source said. "Clearly, that did not happen."

TRAPPED IN A NIGHTMARE

The process of dismantling the tower has been plagued by insurance battles, labor strife, haz-mat issues and mishaps - including a pipe falling 35 floors onto Engine 10, injuring one firefighter.

Just make them pay a little fine, and let's move on. We wouldn't want the contractor to lose out on that $6 million bonus. Right, Bloomie?

Photo from NY Post
Posted by Queens Crapper at 5:47 AM

Of course the fire has caused the air
to become contaminated.
(Cover it up....it's bad for business)!

The public is being lied to once again.....
First by Gov. Pataki and now by Gov. Spitzer!

I don't know about any of you....
but I plan not to be anywhere in the vicinity!
I'll do my buying elsewhere!

If you can smell it and it irritates
your respiratory system.... then the air quality
is dangerous!

The plastic sheathing around the building
was put in place to contain asbestos
and other toxic materials that are present.

Why then would these materials
not be disbursed into the air by flames that have breached this protective membrane? !!!

Bovis is guilty of homicide
and Mayor Mike is their accomplice.

Just wait until the businesses in the area start tallying up and reporting their financial loses
due to customers shunning the enveloping
toxic environment.