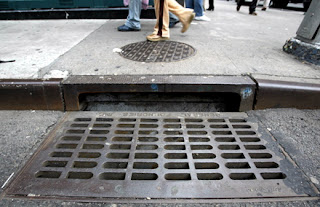 The smell of rot rises from the drain holes and sidewalks on 40th Road in Flushing, Queens, after rainstorms. Flooding on this narrow street, packed with Chinese bakeries and restaurants, is often blamed on the neighborhood eateries, whose discarded fat and grease causes backups in the sewer system.

Neighborhoods such as Flushing and Chinatown with high concentrations of Asian restaurants often have the most grease-related flooding issues, industry experts said.

Council Member John Liu, who represents Flushing, said the charge against Asian eateries clogging pipes is unsubstantiated. "There is a perception among some people that Chinese food is greasy," Mr. Liu said. "There's lots of grease in plenty of other kinds of food, and there's plenty of Chinese food that is lean and healthy. I've asked the city for comparisons with buildup in sewers in other areas, and I have gotten zilch."

Photo from Getty Images
Posted by Queens Crapper at 6:20 AM

Johnny Liu: "I've asked the city for comparisons with buildup in sewers in other areas, and I have gotten zilch."

The problem is in YOUR district asshole! What an idiot!

How many Asian restaurants were fined
for not having grease traps installed in their sinks?
You're a city councilman with access to the figures...why don't you look 'em up!

Soybean oil, although vegetable based, is grease
and the mainstay of stir fried wok cooking
and deep frying......unless the steam cooking method is employed.

Stop blaming it on the few "occidental" eateries like Mc Donalds or Kentucky fried Chicken which constitute the minority in the area.

And we're tired of the same old "they didn't know any better" excuses for law breaking!

The problem is all those pork dumplings and sauerkraurt.

Everyone knows those Czechs on Main Street just don't give a damn about the community, and the smell of all that kilbasi cooking, or the sight of all those sausages in the windows is a enough to make one sick.

Everyone knows that Johnny Luichova turns a blind eye to the antics of his campaign donors(excuse me, constituents)

The Quakers must be outraged over all that beer drinking and calliope music that drifts in from College Point beer gardens.

The last straw is teaching locals to speak Czech in the projects. Everyone knows that Slovak is much more useful.

What is Flushing coming to?

Imagine coming from a well off family
(save his being sired by a criminal father)
and having graduated from the prestigious
Bronx Science High School........
always having to defend the hordes of his
unwashed, lower class, uneducated fellow countrymen!

It must get embarrassing for him
representing such lying and corrupt cultural examples !

Liu is just a sock puppet
for the Stavisky/Democratic Party Machine.

When he reaches the end of his tether...
he gets briskly pulled back.

It's life on a leash for poor Johnny.

ATTENTION JOHN LIU, ATTENTION!!! The restaurants in your district are clogging the sewers with grease. No need for comparisons. FIX THE PROBLEM!!!!

You can find a list of the restaurants on your campaign finance records. Get those restaurants to obey the law and stop pouring grease down the sewers. This has been going on for nearly 20 years. All city agencies have addressed this situation on 40th Road at one time or another. Former Borough President Shulman was given a tour. Notices were posted in ALL languages. They have been told time and again what is required. Stop turning a blind eye to a very serious problem and DO SOMETHING, DAMMIT!!!

I agree.
It's the fault of Liu's campaign contributers
who have repeatedly greased Johnny's palms
so very often that his cupped hands
runneth over into Flushing's sewer system!

One must surely admit the Asians have "improved" the quality of life in previously "blighted" Flushing!

It is NOT racist or bigoted to point out that the Asian restaurants dump grease into the sewers. It IS a fact that it's done.

Treat your nostrils to a walk through Chinatown. Or to the corner storm drain nearest a Chinese fast food.

pour dennis gallagher down the sewer

John Liu is a total failure.

All he can do is hurl a litany of anti Asian
racism accusations at his critics.
(Employing the old smokescreen effect in a futile attempt to hide his bad job performance).

Watch out......
one of his staff members was recently overheard
saying that Liu is going to be running for comptroller!

Remember this on election day.
You don't want this guy to be handling
the municipal pocketbook!

Heaven on knows what else is being flushed into the sewer system in Flushing. Engine oil? Battery acid? Snake head fish? Mitten crabs? Let's have some comparisons....

Councilman Liu is a publicity-seeking, worthless piece of crap!

That smell rising from the sewers
is the powerful odor of mendacity
and pork barrel legislation fat!

This disgusts me. And how long has this been going on already???

If you can't get rid of your damn grease correctly then stop using it. I am so sick of hearing excuses. And what does a city comparison prove? And if the comparisons came up "zilch", isn't that more of a reason to fix this problem before your comparisons come up differently and you are really in for it. I am surprised that nobody completely trashed your restaurant.

I don't understand why some people can break the law because "they didn't know better". Or there is always the "no one told us". How old are we? You sound like a complete moron. A 5 year old could do a better job than you.

And I am sick of "get out of jail free cards". If this was going on in Forest Hills you know damn well this problem would have been fixed the moment it was acknowledged. They take care of their neighborhood.

Why can't you people simply do your job? It is disgusting. Sorry, but Asian food smells bad because of the way you cook and the frickin' ingredients. I do not mean to sound racist because I am not. But your basically setting yourself up to be stereotyped. You are going to become known as "greasys" How come you are the only people who can't dispose of grease correctly. No one else seems to have a problem. Smoking too much opium these days.....??

We have enough eye pollution, why must we make it worse with odors. You know what we should let anyone come to NY and destroy it some more. OK everyone, dump all your household chemicals down the sewer. That was fun! Would you do that on your home property? What is it? Since you live in another neighborhood you say, "too bad, not my problem"? What are you
"to good" for protecting your environment.

Get it together people. NY has issues that are so much more important than this. Stop procrastinating.

But if not, we can always relive the 80's. Might as well. You don't have to properly dispose of garbage or liquids, than neither do I. Let's just throw our garbage bags out in the street and let it soak in the sun for days. I don't like it in my house or the garage, I am going to pollute my own domain. And I am sure a raccoon will tear it open in the middle of the night and spread chicken bones across the street. I am gonna leave pieces of fish around too while I am at it, really get the smell going. And oh while you are in the kitchen hand me a bucket of grease.

Oh and one more thing, keep your weird animals and bacteria to yourselves. We don't need fish with teeth coming out of the sewers. Or new type of bacteria to form. We smelled just fine before you came along with your plates.

Get this done already.

Deborah, so you're not racist huh?

I'll have to inform you that not all Asian food is greasy. Actually, majority of the food is healthy for you. Why do you think Asians live longer, or do you not know that fact either? So, get your information straight before you attack a certain race. You don't want to make yourself sound ignorant when you're trying to make a point, do you?


Let’s go thru some of the things you said:


1) “The only people who can't dispose of grease correctly”.

I remember when I was a kid back in the 1970’s, seeing my friend father (non Asian) after changing his oil, telling his son to throw the bad oil down at the corner sewer.

You use the word opium like a joke, probably knowing fully that it was painful time in history, when wars were fought, and people became addicts all in the name of trade.

I don’t think so; these people are probably one of the hardest working people I see. They come to this county, not looking for hand outs, but an opportunity to work.


Yes, Asians have strange food tastes, and customs, but so do other peoples.


Yes, Deborah, you are racists.