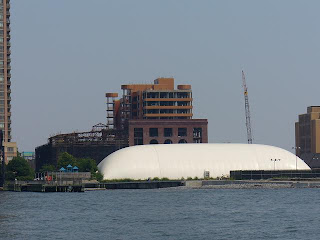 The luxury apartment complex, dubbed The Power- house, is one of the latest residential develop- ments sprouting up amid a building boom in the area known as Queens West.

From chimneys to condos

Two years ago, the 275-foot chimneys of the former power plant - which was last owned by the Schwartz Chemical Company - were demolished, despite vocal opposition from preservationists.

Now, circular glass-enclosed living rooms are being built on the footprint of the demolished chimneys.

The Hunters Point plant was a symbolic icon of the industrial era on the East River. Project costs have been estimated at $100 million to convert the former power plant into luxury condos.

This is one very expensive and ugly pile of Queens Crap!
Posted by Queens Crapper at 12:37 AM

This is gunna be some ugly Frankenstein looking shit in the end... I believe the hasids are behind this one.

H-m-m-m.....
the Hasids are indeed a powerhouse (voting block)
and are well known for ugly building !

Better to have completely torn that building down
than to have created such an abortion!

The top (new construction)
looks like it was built elsewhere......
then airlifted and dropped onto the existing bottom!

It's totally inconsistent......
like adding a Cape Cod style dormer addition
to a Tudor style house.

So now we get anti-semitic opinions on Queens Crap. Do you think any rational person will take bigoted comments seriously?
This is a KFA and Andres Escobar project. They have done highly regarded conversions in Manhattan, Williamsburg, Montreal and other places. The construction on this site has just begun and I'm sure will look much different when completed. But I'm sure the bigots here know better than everyone else . . .

Oh come on, you can't be from Queens if you take such offense at politically incorrect statements. Maybe if they didn't curse anyone who isn't of the cloth and mixed and mingled with the general population, they'd be better accepted. Same goes for those who come here, speak no English and expect the world to revolve around them.

And now, back to the Powerhouse please...

Kids will be kids.

Now on to the real dirt. I understand there will be a photo exhibit soon of a native son from Hunters Point who went out and documented the destruction of his community with this new development.

This time, instead of a pean to development, its a chilling portrait of a community in the process of being wiped off the face of the map.

I was saddened a few year ago at the booklet done by Place in History about Hunters Point with a big pile of rubble on the front cover.

It was nicely put together.

It was very popular with the new residents.

What's up with that beached whale?

the beached whale used to be tennis courts, then a sports club. Not sure what it is now...

Anonymous #4: The property was bought for an undisclosed amount by developer Cheskel Schwimmer, vice president of Brooklyn-based CGS Builders.

"At first, it seemed that CGS was prepared to save the smokestacks. The New York Times: " 'We have no intention to take down the smokestacks,' said Cheskel Schwimmer, vice president of CGS Builders, a Brooklyn firm. 'We want to try to preserve the smokestacks as much as possible.' ...To that end, Mr. Schwimmer and the architect he hired, Karl Fischer, have produced a rendering that includes a cube of glass resting on top of the existing building and attached to the smokestacks, which would actually become part of the new building and be equipped with windows. 'We will both reinforce the smokestacks and create good living space within the building,' Mr. Schwimmer said."
That was in February, 2005. By April, after inspections had been done, the smokestacks were apparently found to be unsafe and unsalvageable. Finally the towers were pulled down, beginning the week of April 9th. Another icon is gone."

I just have one question about Queens West:

How the heck are all of these people suppose to get to Manhattan? On the 7 train, which is usually crowded by the time it leaves main street in the morning?

Have new and vastly improved sewage lines been installed to handle the waste from these hundreds of new people living where there previously were none? Have additional feeder cables been laid to provide increased electrical capacity to meet the new demand? Has the city made any plans at all to increase mass transit options in this area?

The answer to the majority of these questions is most likely a firm No. and that leads to a few more questions:

Who's back pockets is the money from all this development going into? Where's the property tax money collected on these 'high end' apartments being spent?

Until some of these questions can be answered, there should be an immediate embargo placed on building one god damned new building in this area.

With respect to the smokestacks, I thought I had read that the city eventually required that they be taken down. I may be wrong but I thought the city had something to do with it. Beyond that, my question is - SO WHAT? We are not talking about taking down an iconic statue or monument. We are talking about SMOKESTACKS!

Why do you think Astoria fried last summer?

All Con Ed attention went into making new lines for the waterfront development.

To anonymous re: questions about Queens West. Save them up for the next time one of our local "leaders" is standing around at the subway station to ask for your vote. I'll be asking the same questions myself!

you have control, stop it now

My, my .....
it didn't take long for some knee jerk....
better make that plain JERK
to start accusing somebody of being anti-semitic!

That great white whale in the foreground
has got to be Moby Dick!

Where the hell is Captain Ahab when you need him ?

we have already begun contacting other publications around the city to alert them to what you are allowing. the next step is a religous group who specializes in outing comments like that

as long as you promulgate these comments, we shall alert others of your acts. we will not stop unless you do

you have control, please use it

No one here is threatening anyone with physical harm, they are merely expressing an opinion. If you don't like it, then there must be an awful lot of websites that you don't like, such as Curbed, Gothamist, etc. If it offends you, don't visit.

There are anti-semitic comments on this site. A person is not a jerk for pointing out that those comments are bigoted and idiotic.

I don't always agree with Queens Crapper, but I do in this instance. A few comments here may be somewhat nonkosher but they are not severe enough to warrant censorship. (No, I'm not one of those anonymous posters above.)

I agree that the Crapper shouldn't have to censor the comments as long as they are not obscene. It is better for everyone to actually see how ignorant those commenters are. But some friendly advice to the Crapper - you may want to put a disclaimer on your home page saying something to the effect that the views and opinions expressed are not necessarily your own and that your posting the comments does not indicate your agreement or support.

Curious if those comments were placed by hacks or developers to discredit this site.

"you may want to put a disclaimer on your home page saying something to the effect that the views and opinions expressed are not necessarily your own and that your posting the comments does not indicate your agreement or support."

It's been there since December.

I understand that certain 'community' websites routinely ban or censor people (you know who you are) as dialog and discussions are somethings that makes civic types in Queens nervous.

Can't script things in a real public forum you know.

That is why Crappie, for all the sophomoric bathroom scribbles, is so great. Democracy is sometimes messy (sorry all things 'Astoria'!)

How come nobody has been upset with the myriad of homophobic comments in the posts?

we are all entitiled to our opinion. if one thinks the site is offensive, no need to visit again. i was born and raised in communism where such things as freedom of speech was just an ideal. my father went to prison for his rights. nobody can not put their fist in my mouth to keep me from expressing my opinion.

that said, the building is HORRIBLE at this stage. i wonder what it will be transformed into in the future.

Freedom of speech is not to be stifled.
Anyone who takes offense at anything that's said should prepare an intelligent rebuttal.

Let's all please refrain from issuing strong arm threats....
and not start sounding like Nazis!

".....the next step is a religious group
who specializes in outing comments like that...."

That statement sounds like
a rather coercive threat.....doesn't it ?

UGLY IS UGLY no matter who builds it !

And this is one BUTT UGLY ASS BUILDING !

I'm surprised that nobody from Manhattan
has complained about it ruining their view!

"I'm surprised that nobody from Manhattan
has complained about it ruining their view!"


Don't knock it --- that is the only way people in Queens can get something landmarked.

What an amusing person......
the one who threatened to unleash
a "religioous group" to create trouble for this site.

They would have already done it
if they had the power (or the moral grounds)
to do so.

We deal in open honest opinions and criticism here and sometimes issues can tend to be confrontational.

If you see any subversive anti Semitic intentions being promoted in any of these comments ,
then I fear you have an overactive imagination.

Wow - check out the meltdown about the Powerhouse LIC condo on Streeteasy. A story here.