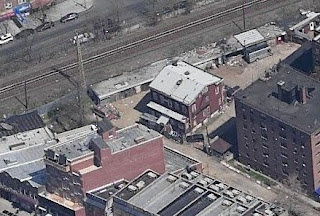 From Forgotten-NY, ca 1999: "The only property fronting on Claremont Terrace is this dilapidated house. It's got possibilities, but let's say it's a fixer-upper handyman's special for now."

"According to Bob Singleton of the Greater Astoria Historical Society, Claremont Terrace...

...was a row of houses built by Samuel Lord (of Lord & Taylor) for his daughters. The last one left (1854) built closest to the train for his least favorite. If you saw the four buildings in their heyday you would weep. 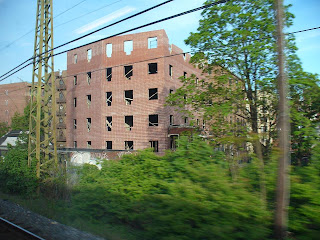 You can say that again. At left is the property today. And here is the list of complaints that 1 Claremont Terrace has managed to rack up over time. This ECB violation was for building what is seen at left under an 'alteration' permit. Well, they did leave the enclosed porch...(seen to the left of the tree)
Posted by Queens Crapper at 1:00 AM

Yet another example of the weakness of preservation in Queens, and the indifference of this to the Manhattan-centric 'NYC' preservation community.

This building should have been saved. Elmhurst certainly needed a community center, a place where its youth could understand and appreciate their neighborhood ... no wait ... this area is simply a way station to somewhere else and a moneymaking gold mine to real estate owners.

A 350 year old community gone like snow before a summer sun.

Yes, indeed, walk around Elmhurst. As they say, this is tomorrow today.

Once again.... Queens lags far behind in protecting its (although dilapidated but preservable) historic past!

We all know the reasons....so I'll not bore you!

Imagine a place like Elmhurst once being such a thriving, vibrant and well-respected community that someone like Mr. Lord built homes for his family here. Hard to believe, eh?

Weren't rogue developers supposed to start going to jail under recently-passed legislation? Or was I just dreaming that. There have been plenty of stop work orders violated since that time. Anyone caught serving time at Rikers? Didn't think so.

A couple of convicted rogue developers (i.e. Tommy Huang) should be thrown into "general pop" on Rikers to be properly buggered by their cell mates!

That ought to set an example to any future lawbreakers!


"Bubba" up your butt beats a slap on the wrist to teach a lesson!