Two homeless people murdered, two other people wounded from stabbings on the A train from Queens to Manhattan 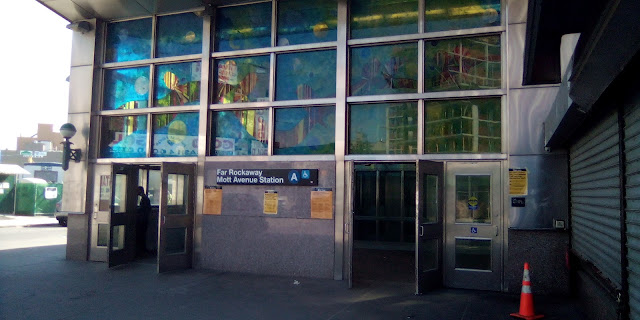 Detectives are investigating two deadly stabbings on the opposite ends of the A line in Queens and Manhattan within a span of two hours between Friday night and Saturday morning.

Police sources said they are investigating a possible link between the two cases as well as a pair of additional stabbings that occurred on Feb. 12-13 at the 181st Street station on the A line in Washington Heights. The victims in those cases are expected to survive their injuries.

During a Saturday afternoon press conference at One Police Plaza, Police Commissioner Dermot Shea announced that the NYPD would add 500 officers throughout the subway system immediately to increase safety. Detectives, meanwhile, are working around the clock looking for possible suspects and are seeking tips from the public.

The first victim, an unidentified man, was found stabbed while seated on board A train at the Mott Avenue station in Far Rockaway, Queens at about 11:20 p.m. on Feb. 12.

Officers from the NYPD Transit District 23 and the 101st Precinct discovered the man on a bench inside one of the train cars with stab wounds to his torso and neck.

Responding EMS units pronounced the victim dead at the scene. Police have not yet disclosed his identity, pending family notification.

Two hours later, cops in Manhattan responded to the fatal stabbing of a woman on board an A train that stopped at the West 207th Street in Inwood — the line’s northern terminus — at about 1:21 a.m. on Feb. 13.

The discovery was made during the nightly overnight closure period of the entire subway system, when train cars are disinfected to guard against the spread of COVID-19.

Cops from NYPD Transit District 3 and the 34th Precinct, while responding to a 911 call, found the 44-year-old woman under the seats on board one of the train cars with several stab wounds to her body.

EMS units also pronounced her dead at the scene. The NYPD has withheld her identity, pending family notification.

The “A-train Ripper” is in custody, multiple law enforcement sources told The Post on Saturday night.

The knife-wielding madman was wanted in a gruesome subway spree that left two homeless people dead and two others slashed along the A train line, and was nabbed in Upper Manhattan, the sources said.

His shoes were still splattered with his victims’ blood when he was taken into custody — and he was still in possession of the bloody knife, one source added.

The yet-named suspect was in custody at the 34th Precinct in Washington Heights, the sources said.

The bloodshed sparked an outcry for safer subways, and NYPD Commissioner Dermot Shea responded, announcing a “surge” of 500 additional cops for the department’s Transit Bureau to be deployed across the city immediately.

The spree began Friday morning, not far from where the alleged stabber was caught, authorities said.

Murders,what murders? Assaults,what assaults? According to this moron in city hall,the city is safer then ever. If you saw his press conference last week when he rebuked his ball less police commissioner the city is safer then ever. Dermott grow a pair of balls and open your mouth. Your a disgrace to anyone who wears or has worn the the uniform before you. Is the thirst for power that important to you that you have thrown all your self esteem and dignity out the door.

It's always a typical reaction of city hall and the police department to do something after the fact that two innocent people have lost their lives. They close the barn door after the horses have fled the barn.

There is blood on every politicians hands with these ridiculous homeless policies and for handcuffing the police. You morons got what you wanted.

And the stupid people of this city will keep voting these idiots in because they are democrats. Keep voting them in while they lead you like sheep to slaughter.

The problem is all the mentally ill homeless who are out on the streets.

Take the “A” train? Hard pass.

Since we are looking to defund and get rid of the police, this would be a good time for all the peaceful protesters to go out and volunteer to patrol the trains to keep us safe. If they can manage to do it better than the cops can, then it will give credibility to their cause. This is their big opportunity to show us how their ideas will work in the real world.

The good thing is that comrade deblasio cannot run another term as mayor. We'll see who the people of NYC choose as the next one this fall.

Cuomo signed an order for no bail in NY. So this slasher maybe back out in the streets!!!

Where's the National Guard? Take them out of DC and bring them into NYC Subways.

So glad I left the cesspool once called NYC !

Brought to you by those who want "criminal justice reform".
NYC Schmucks Vote Blue no matter who !!!

"Typical reaction of city hall"
If it weren’t for double standards, the left would have no standards.

It’s so cold out in Texas, I saw Democrats with their hands in their own pockets!

AOC knows the best they're just acting like this because they need a loaf of bread.

They need a loaf of bread and free Met tickets !

War on crime, war on poverty, war on drugs, war on terror: war on us.

Think of how many poor people could be helped with the money we spend in Iraq and Afghanistan and Syria.

Hopefully the suspect was wearing a mask. Wouldn't want him spreading "the germ of certain death" all over the place.

Think of how many poor people could be helped with the money we spend in Iraq and Afghanistan and Syria.

Add Libya to the mix, the Gulf war and soon there is a good amount of money.

But hey, important is that General McChrystal for example and General Jones have their monies. Along with others. Michael Hastings was very publicly "car accidented" for bringing this little fact to light on CNN with Piers Morgan.

This wonderful country of ours is corrupt to the bone marrow and you cannot say a thing about it, the MSM, the propaganda arm will trash you, discredit you, the corrupt politicians who have been in office for 20-30-40 years will do nothing, the status quo will go on. All based on blackmail of course. Those 3 letter agencies know a few naughty things about everybody!

War on crime, war on poverty, war on drugs, war on terror: war on us.

Fight for peace is my favorite. What a bunch of horse manure.

The sheep are happy!!! Enjoy being slaughtered!

Don't worry. Once he is released from prison due to a technicality, he will be rewarded with free Metrocards, city vouchers, $50 dollars Starbucks card, and free housing in a tax-payer funded homeless shelter with other drug-addicted, psychotic homeless criminals.

This is the new normal for NYC.

Get out before you too are punched in the face by a violent mentally-ill homeless drug-addict, or pushed onto the subway tracks while a train runs over you and kills you.

But don't worry, City Council Members, the Mayor, and Thrive NYC are working to make NYC a safer place for you to work and live in....Right?