Ron Kim claps back at Cuomo 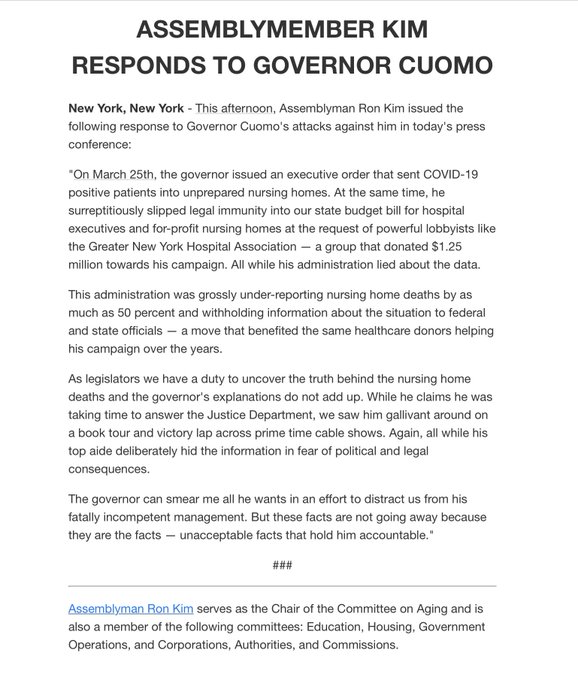 This typical of Cuomo and other politicians to blame others for their mistakes. This is right out of the socialists play book to smear others, blame others and take the heat off yourself and never take blame for your short comings.It's Trump's fault,the CDC's fault. Never take blame for your mistakes. Cuomo is smarter then everyone else and knows better then everyone else and you will do as told. And people follow him like sheep to slaughter.

The Libtards were falling all over each other praising this asswipe for his leadership and press conferences. They even rewarded him with an emmy for the great job he was doing. While he was quietly killing grandma and grandpa.

I salute you assemblyman Kim for having the balls to call out this liar for his mistakes. Hang in there and don't let this coward threaten you and your career. At least you have the backbone, honor and dignity to do the right thing when you see a wrong. At least you can hold you head high because you've done the right thing.

I wish my assemblyman Brian Barnwell and the rest of the assembly and Senate grew a pair of balls and called out this killer on his actions. Alas this will never happen because with them it's the old Socialist saying "Party unity above all else".

Maybe the Feds now can knock the smug,condescending and I'm smarter then everyone else look of this killers face.

Yea, liked how they waited for the election is over to talk about 'justice' and 'rights'

Sorry, guys, the only way we can believe anything will change is to put the program in the hands of the Republicans. They seem to be the only people that care about American Citizens. The Democrats have basically stopped caring about anyone except themselves for a number of years.

My father used to say when I was a kid. The lie is almost always worse then the crime. Apparently Mario never instilled that in his 2 sons both lying pieces of shit.

Anyone who ever noticed the framed PHOTOGRAPH of Cuomo hanging in the lobby of at least one state office - and probably all - should not be surprised by anything he does.

My my ain't going to well for Fredo and Benito

Cuomo is a thug.

Yes he did. Now is payback time in some sicko's head.

@Sorry, guys, the only way we can believe anything will change is to put the program in the hands of the Republicans.

At this point please spare me from this crap. They were no better! Payola, pick up good money, dish out billions for special interests.

Term limits. Now. I don't care about the letter R or D - be honest, work for the people who elected you. Simple.

So without labels, insults, please read this carefully.

The whistle blower with an SDNY top judge mother-in-law and her own family tied to GNYHA did this:

"DeRosa’s father, brother, and sister are employed at one of the lobbying firms that represents GNYHA, the health care industry group that funneled millions to Cuomo’s political machine and spearheaded the corporate immunity law."

"Cuomo’s political machine received more than $2 million from the Greater New York Hospital Association (GNYHA), its executives, and its lobbying firms. The health care industry group also funneled more than $450,000 to members of the New York legislature in 2020. "

GNYHA said it “drafted” the provision, which did not merely shield frontline health care workers from lawsuits, but also extended such liability protection to top corporate officials who make staffing and safety decisions.

Critics argued that shielding hospital and nursing home executives from the threat of lawsuits would remove a deterrent to cost-cutting, profit-maximizing decisions that endanger lives. They were ignored."

Great. With profits guaranteed, shields in place is a win win situation for everyone.
Except the elderly. But who cares?
She did!

"Democratic State Sen. Alessandra Biaggi said she was concerned about a potential link between GNYHA campaign cash and Cuomo’s corporate immunity law, Cuomo deployed his spokesperson to attack her."

Educate yourself, read, research. This crap is the biggest scandal of modern times in NYS. Players are cutting ties, throwing the Emmy Award winning dude under the bus, but fear not they are just as guilty!!!! Follow the money!

Term limits. My only concern that in their last term with no higher office in sight it’s a green light to screw and steal from the constituates as hard a possible cause their are no ramifications.

But as for the US Senate bring it on. Or repeal the 17th amendment.

Did the Sheeple forgot that he had also threatened President Trump?

Cuomo's true colors came out when he said "who cares who died!!" The guy has zero empathy for the people he governs for. He should put on his big boy pants and RESIGN IMMEDIATELY.

All this going on and our Leader President Biden takes another snow day ! LOL...

My my ain't going to well for Fredo and Benito

I think the better analogy would be Fredo and Sonny.

Will Hiding Biden have the NY prosecutor fired?
Oops, that's only for Hunter.

Will Hiding Biden have the NY prosecutor fired?

Not sure, but we are the laughing stock of the world.

Sky News Australia https://youtu.be/8Nhm6VAIc90
"His mental power is commensurate with his voters." So true...
This is the biggest embarrassment to the United States ever.

Benito you have a slight problem sweetie.