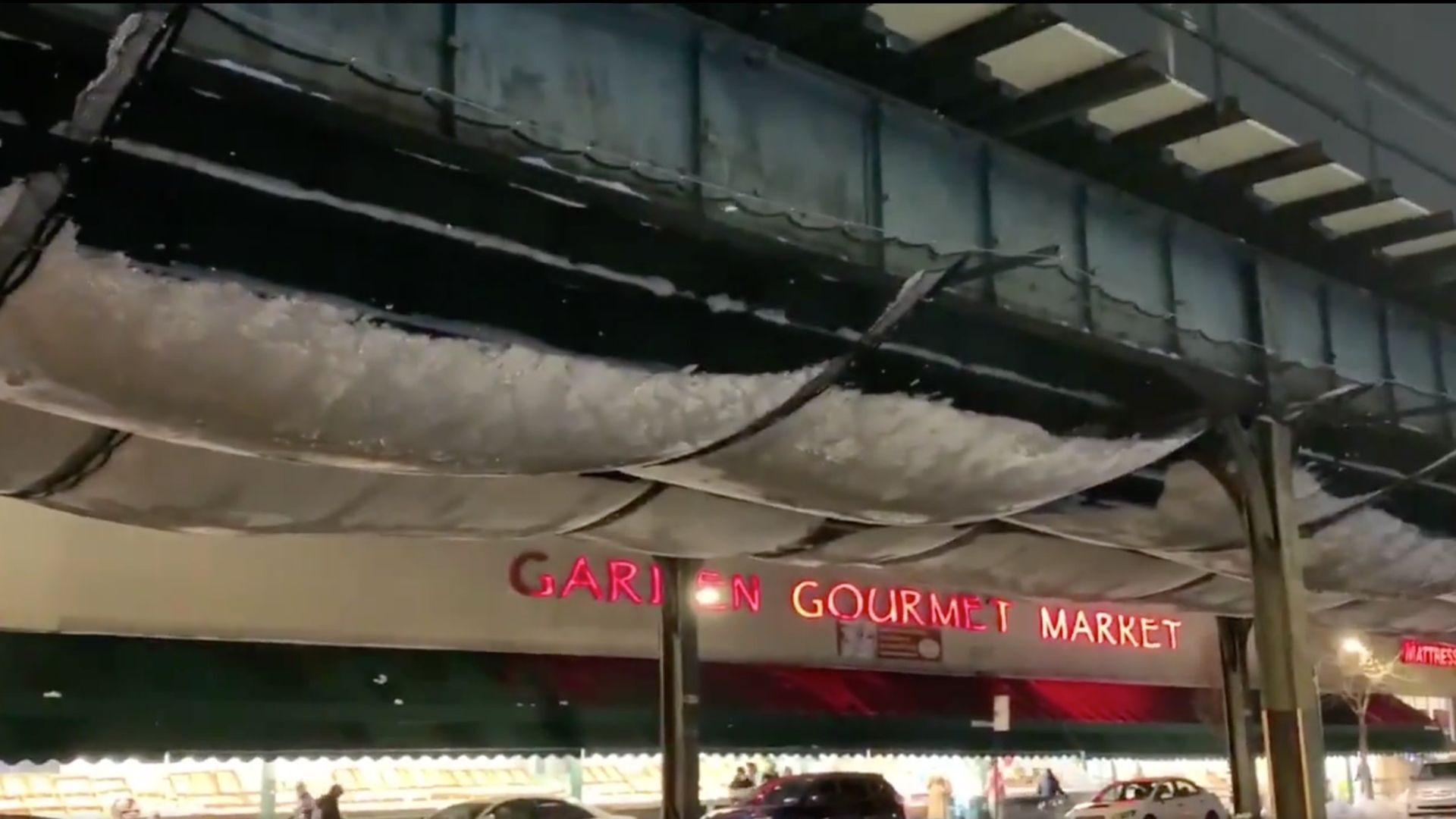 A massive amount of snow collected inside the netting under the elevated tracks along the No. 1 train in the Bronx.

Many residents in the area told PIX11 they're worried to walk underneath the netting, which was installed under elevated subway lines to catch debris.

The MTA identified six areas where the netting underneath elevated tracks is being weighed down by snow and ice: three in Queens, one in Manhattan and two in the Bronx, officials said. No injuries or property damage have been reported.

“Nets below elevated tracks are designed to protect the public from infrastructure hazards by catching falling objects," Minton said. "What materialized during Monday’s storm was an epic amount of snow that is being systematically removed to prioritize safety of drivers, pedestrians and transit employees."

Wow-falling objects are still an issue. I remember nice sized bolts falling from the 7 train tracks all the time years ago. I was always amazed that nobody ever got killed by one of those things but I'm sure more than one person had their car damaged by them over the years.

Riding on what passes for public transportation in a city that has already (and, long ago) betrrayed ALL pretense of public trust, safety, ethics, integrity, accounability and transparency is now a deaily experiment in extreme terror, and certain death.

Someday, I swear: When I seize the moment in time to finally disabuse ALL of the filthy MTA scourges of their publicly unauthorized entitlements (and, the politicians who reinforce public safety corruption and gross negligence, with impunity), I will wield my personal power to FOIST the same, daily transportation system onto them all to use, and ensure that nonunion workers are on the tracks for those karmic days that await their rightful fates of destiny. They ALL DEVALUE honesty itself――to pathologically high treasonous, traitorous and tyrannical effect!――and, the ever languishing public be eternally duped, bilked, scammed and damned!

❝It is hard to imagine a more stupid of more dangerous way of making decisions than by putting those decisions in the hands of people who pay no price for being wrong.❞ ――Thomas Sowell

❝ ... most men and women will grow up to love their servitude and will never dream of revolution.❞ ――Aldous Huxley, 'Brave New World'

❝People have to be armed to have power, you see.❞ ――Fred Hampton

❝The masses have never thirsted after truth. Whoever can supply them with illusions is easily their master; whoever attempts to destroy their illusions is always their victim.❞ ――Gustave Le Bon (1841-1931)

What exactly did they expect to happen after a snow storm? Don't need a fortune teller for that.

They need to go back to maintenance and the time proven wooden ties.
These concrete ties somebody sold these jackasses on have no flex and 2: They dont absorb the shock. The trains are jackhammering the 100 year old structure apart.
Its not only shock from the trains but the steel rails compressing & expanding over winter/summer. MTAs experts had trackmen leave huge expansion gaps in the tracks for this but NYCs 60 ton train steel wheels hammer these gaps like potholes and the concrete ties transfer it all straight to the structure.
That's why its now so incredibly loud (near 130db)and the ground shakes under the 7 train. And those newer train cars are 20 tons (each) lighter then the old Redbirds. How the MTA can deny something's seriously wrong is insane and mass negligent. Nets? Nets?
Can a net basket catch a 60 ton train car and 20 dozen or so 800 lb concrete ties ?

Again: concrete ties are only good for lightweight soft climate tilting speed trains in Europe, Japan or trains on the ground on ballast rocks.(like the LIRR, large Metro North and Amtrak Commuters)
The MTA has made a huge mistake and nobody is talking.
I wonder if former commissioner Brit Andy Byford resignation is related to this, that former station manager from England worked brooms & books. He knew nothing about structural engineering or NYCs elevated trains originally designed to run wooden cars. England trains run on the ground on crushed rock ballast.
NYC is not England, Japan or Italy.

The Subway and Buses should retun to private for-profit operations like they once were !