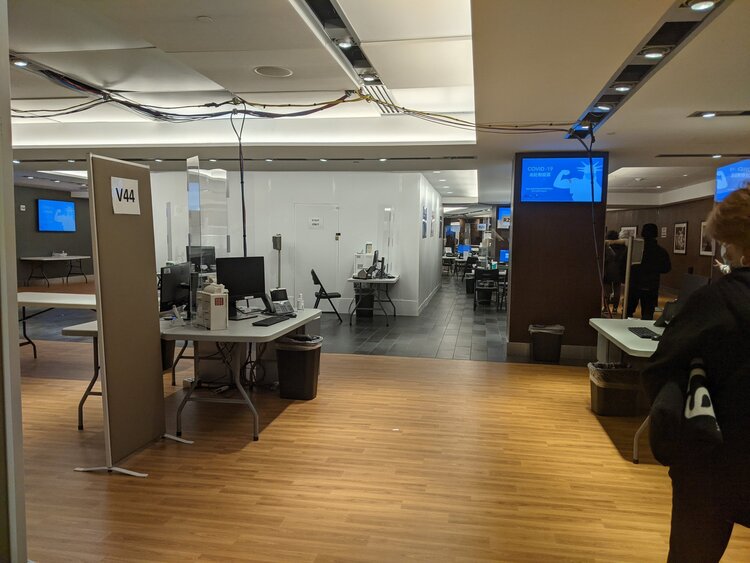 Azaz Ahsan and his dad got to Citi Field at 10 p.m. Wednesday for their scheduled COVID vaccine appointment an hour later. By the time they left, it was nearly 3 a.m. Thursday.

After a three-hour wait in the cold, Ahsan, 28, said he and his 65-year-old father entered the warm stadium just before 1 a.m. About 150 people were waiting on line in front of them, while hundreds more queued up in the cold outside the stadium gates, he said.

“Not opening up more of the stadium so the line can be inside is a disgrace,” Azaz said around midnight.

Joanne Kostopoulos, a 48-year-old teacher from Oakland Gardens, said she decided to leave after waiting close to two hours past her scheduled 9:45 p.m. appointment. She had to be up in the morning to teach class and was told the wait would take at least two more hours, she said.

“[I] decided to leave because I wasn’t prepared to stand in the cold,” Kostopoulos said. “When I found out that I had to wait for one or two more hours before I made it inside I knew I had to leave because between work in the morning and the cold it just wouldn’t be feasible.”

Hundreds of Queens residents spent hours Wednesday night and well into Thursday morning waiting for their scheduled appointments at the 24-hour Citi Field vaccine site. Similar lines formed at another vaccine hub in the Bathgate section of the Bronx.

Once inside, the Citi Field vaccine recipients encountered an understaffed clinic with too few medical workers administering shots, six people told the Eagle. Several others posted photos and accounts on Twitter and Facebook.

Ahsan said that of the 50 vaccine desks inside, “maybe 15 had nurses at them.” Vaccine recipients also had to fill out the same form twice even if they pre-registered online, he said.

Kambri Crews, who owns Q.E.D. in Astoria, said she waited from about 7:20 p.m. until receiving her shot at midnight. She had an appointment for 8 p.m.

“The nurse who gave me my shot said they didn’t have enough nurses,” she said. “The doctor across from her said he had been there since 7:30 a.m.”

“Empty registration and vaccine administration pods,” Baker said. “They're not fully staffed up.”

Ahsan, Baker, Crews and others interviewed by the Eagle said staff were professional and as helpful as possible, but under strain from the volume of patients.

They said workers from the city’s Health and Hospitals Corporation told them the delays were due to a surge in rescheduled appointments without the necessary staff increase. Baker said his appointment was postponed due to a supply shortage last week and rescheduled for Wednesday.

Meanwhile, they keep opening up more and more sites even though they lack vaccines and can't even keep up with the existing sites already opened. This whole thing has been a joke. This is what happens when you vote for dumbocrats who are clowns. You put the 3 stooges to run ny and this is what you get. The three stooges known as Schumer, deblasio and Cuomo. The three of them are a joke but the sheeple of ny spoken when they voted for them. So this is what you get when you vote with your ass.

White people are not involved in the decision-making anymore so is it a surprise, or indeed does it matter, that things are starting to fall apart like a 3rd world country?

Ability is not important, the only allegiance is to the Democratic Party dogma.

Such is life in a banana republic. Better get used to it because the 400 million guns people have bragged about the last few years are merely gathering dust in closets. The Founders would have already been using them on The Usurpers and their criminally insane party.

What I don't understand is why they make it so hard to get the vaccine for populations who are sick and infirm but not in an institution?

No sick or infirm person could handle this sort of vaccination madness so they aren't getting vaccinated!

I'm sure its still all Trump's fault.

If you or a friend or family member served our country you can get one at the VA hospital much easier. Just call.
Hope you all had the courage to serve , if not too bad for you.

"I'm sure its still all Trump's fault"
You know that's what the Sheeple are still thinking !

I know a lot of people who got their vaccine in less than 45 minutes. Including me. First and second shots. Let's not dwell on the negatives.

“If you know how to use the internet, then you ain’t black.”
- The Big Guy

For now. Later shots to travel, to work, to whatever.

Everything is Trumps fault according to these people.

Trump received the Vac beacause he's at risk.(and was Pres,could have been a leader and lead by example) FAT,STUPID and Over 65. The only smart move he made was to get just shot for himself,didn't care about his fans.
I hope most of you don't get it. More real estate for me to buy and you to occupate elsewhere.
Good by Queens

I arrived for a 3am appt. this same night only to finally get my shot at 7am in the morning as the sun rose. I guess it was pretty, you could say. I actually brought my own fold up chair knowing full well this was going to be a DMV NYC public school like debacle, and it was. I'm 49 and spent most of my last 25 years rubbing elbows with "elites" in the private sector of business, long forgetting what it was like to "mix" with the common folk of the boroughs like I did in high school and growing up in Flushing in the 80s and 90s. I haven't even been on a subway train in about 15 years after taking the 7 train most of my life. This long, disorganized public managed process reminds me of why I need to never go into the "public" sector and why I need to be getting my azz out of NYC all together asap. What a disgrace. Not the workers that were there, but the NYC public official, most people of color, are the ones to blame.