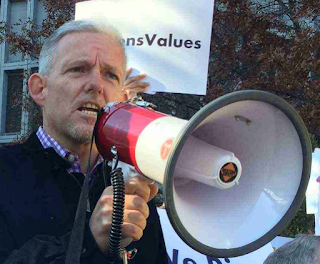 BUT he is notoriously close to real estate developers! In 2013 campaign finance records below show he got at least  $6,350.00 from a developer's family, the Wolkoffs, related to the Five Points Development, which not only got a lucrative variance BUT ALSO the developer G&M Realty owner -AKA Jerry Wolkoff - didn't use all union labor as promised. The people of LIC got glass behemoths instead - thanks to Jimmy! He is also an old friend of big-time developer Stuart Suna. 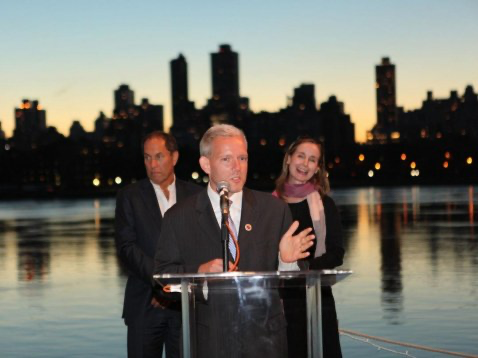 NY Post
While City Councilman Jimmy Van Bramer may have sworn off special interest cash, the same hasn’t been true for his husband — author and documentary filmmaker Dan Hendrick.

His 2017 documentary “Saving Jamaica Bay” is larded to the hilt with money from lobbyists and big real estate interests the councilman swore to avoid, a review by The Post shows.

The influential lobbyists singled out for thanks in the film credits include Uber lobbyist Patrick Jenkins, the founder of Patrick B. Jenkins & Associates; Jon R. Del Giorno, a founding member of Pitta Bishop & Del Giorno and lobbyist for the Yankees; Arthur Goldstein, a partner in Davidoff Hutcher & Citron and lobbyist for the Greater Jamaica Development Corporation; former NYU lobbyist Rose Christ, of Cozen O’Connor; and Joe Reubens, a partner at The Parkside Group who lobbied for AT&T.

Big real estate also chipped in, with The Durst Organization, Tishman Speyer Properties, the Real Estate Board of New York Foundation and others also thanked in the film credits.

Hendricks made no secret of the need for financing while making the film, telling local news he took in “hundreds of thousands” of dollars for the flick, which was narrated by Susan Sarandon.

Remember when it was being reviewed for support and the reviewer reported he was not sure it was a particular candidate but the higher up thought it was quite worthy and support was there just... like... that... wah-lah!

You can watch the documentary and judge for yourself.

When it comes to enriching family members due to your political office, the current world champion has to be Joe Biden*.

the current world champion has to be Joe Biden

Once a schmuck always a schmuck.

Fighting for the working man? Yeah right! Bastards like him have been fighting AGAINST the working man for a long time now-more taxes, more regulations, more BS. Pols like him fight for the parasites so that they can keep on getting elected with their votes-that's all they care about.

Joe Biden and Kamala Harris, all the relatives jumping on the gravy train, Harris is the worst, stepdaughter gets a modeling contract, niece is just a shameless self promoter....and then there's Jimmy, the biggest BS artist in NYC

"Once a schmuck always a schmuck." Do You mean the NYC voters ?

"Do You mean the NYC voters ?

If that is what I meant I would have used the plural of schmuck.

Plural of schmuck said...
Y'all getting exactly what ya voted for. Enjoy your dystopia NYC.
Biden is what you get when you let hatred rule over common sense.
Still waiting on my $2000 check LOL...

The OG Alpha male of NYC !

He should bail out Cuomo and buy the Chinese sex ventilators