Predictably, a coalition of the city’s leading NIMBY groups blasted the City Council speaker’s proposal Thursday as a “top-down approach that would leave communities with even less democratic control over massive city rezonings” than they have now.


Well, yes. That is exactly the point.

Riiiight, we elect representatives who vote on rezonings on our behalf. Unfortunately what Planning Together does is remove them, as well as community boards and the borough president, from the equation. Let's continue:


He was disgusted but hardly surprised by the letter from the anti-development groups including Village Preservation, Voice of Gowanus, Stop Sunnyside Yards, Soho Alliance and the Coalition to Protect Chinatown and the Lower East Side.


“We encourage legislators interested in more equitable city planning to ignore complaints by wealthy NIMBYs who are primarily interested in protecting the status quo,” Thomas said.

Wealthy NIMBYs? I think you'd better take a closer look at who signed the letter. 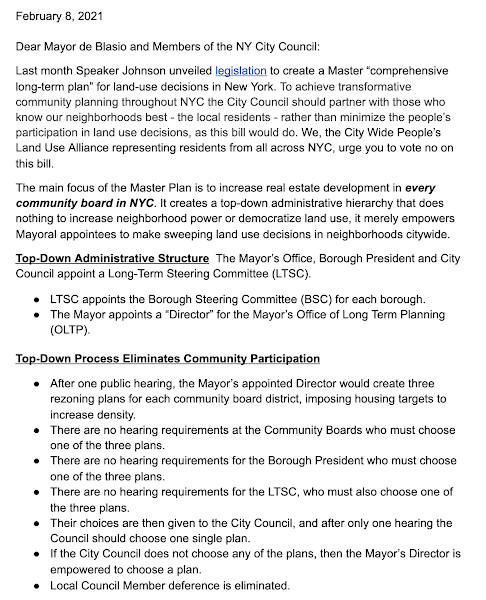 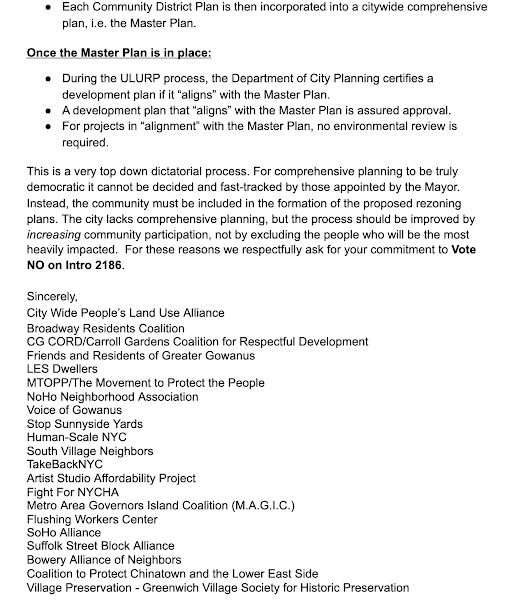 I think MTOPP, Fight for NYCHA and the Flushing Workers Center and others on the list would be surprised to find out that they represent wealthy neighborhoods.

When they have to misrepresent who you are, it means they are up to no good.
Posted by Queens Crapper at 7:28 PM

This article is just more grass for the NYC sheep.

Where do the social justice warriors live that they think we have so many wealthy white neighborhoods, or even many white ones? What we do have are working class people not wanting their neighborhoods be destroyed any more than they have been.

Single family home owners are modern day Kulaks. Not dependent on Government and way to ambitious. Therefore they must be destroyed