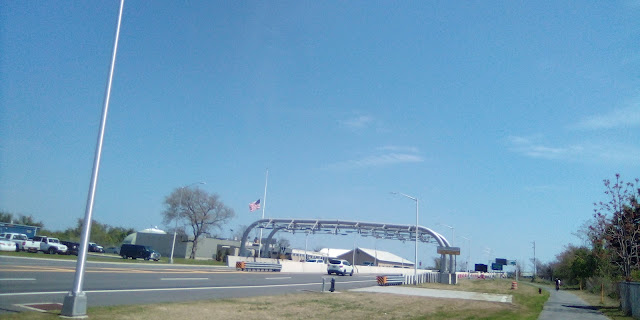 Tolls on the MTA’s seven bridges and two tunnels are set to go up April 1, with the agency’s board unanimously approving an increase on Thursday.

Current toll rates will increase an average of 7.08 percent, the MTA said.

Tolls will increase from $6.12 to $6.55 for E-ZPass users on six crossings: the Bronx-Whitestone, Triboro, Throgs Necks and Verrazzano bridges and the Brooklyn-Battery and Queens-Midtown tunnels. Drivers without E-ZPass will be charged $10.17, up from $9.50 today.

MTA officials opted to retain a discount for Queens residents for those two bridges, as well as the Verrazzano Bridge’s Staten Island rebate — which will now apply to all borough residents regardless of how many trips per month they take across the bridge.

At the same time, the MTA has created a middle-tier for toll collection: E-ZPass users whose devices are not affixed properly will be charged a “special rate” in between the regular and E-ZPass rates.

Krazy 7% increase on the people of NYC and the truckers who will have to raise the price of goods ! So to visit my family in the Bronx from Queens it will cost me over $13 in tolls !

So the extortion continues with higher rates.

Continued persecution of motorists by the billionaire oligarch Democrats of NYC.

Can't wait to pay this toll on my last drive out of NY forever!!

You vote for Democrats. Enjoy it.

Only in NYC do you have to pay to get to Queens from Queens. the toll on the Crossbay bridge is total BS.

Its like living in prison and having to pay bail to leave. Also, raise the tolls for what reason? Most have no toll booth clerks anymore and alot of people do all their transactions online. This will just pay for the heads of this shitty system to get more in their paychecks. This place is a joke and it sucks.

Also, raise the tolls for what reason?

Now, now. With the city shutdown, no taxes coming in from most businesses, they need to make money somehow.

Wealth confiscation is one of the ways of making money now.

Will be interested to know how much tolls are they collecting from the bike crowd.

Extortion is the other way of making money.

"Raise the tolls for what reason?"
To build more bike lanes for me and my Green Bike Buddies !

The MTA Union is so broke they sold their bldg in Manhattan years ago and put that cash in THIER pension,witch is broke,
Build hundreds of housing projects on Flushing airport for all the new democrats coming over the US border.

To build more bike lanes for me and my Green Bike Buddies !

don't hold your breath, you and your buddies are just tools while pension systems are being ransacked greenie.

Greenie said...
No worries my Uncle Joe the "Big Guy" and Krazy Drunk Piglosi are bailing out all the Dem shithole cities with the fresh money !