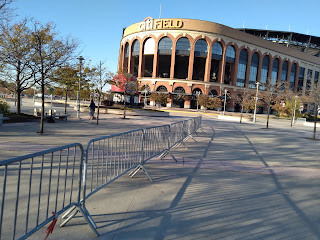 Citi Field finally opened as a COVID-19 vaccination site on Wednesday but demand far outstripped the meager supply — with dozens of desperate elderly locals showing up with no appointment, only to go home disappointed

“I’ve been waiting here for over two hours in the cold. I have been trying to get an appointment for four weeks, but can’t and nobody here is helping us,” said Maria Fernandez, 77, outside of the home turf of the Mets.

“There are so many reporters, photographers here, but there are no vaccines,” she said. “What are we supposed to do?”

The stadium officially opened for coronavirus vaccinations at 10 a.m. Wednesday following weeks of delays due to a shortage of the coveted shots. The site is supposed to serve borough residents as well as taxi drivers and restaurant workers.

But officials this week admitted that it would only have around 800 shots for the rest of the week. During a visit Wednesday, Mayor Bill de Blasio promised that would be upped to 4,000 doses a week by next week.

He also vowed that anyone who shows up without an appointment will be given help to make one for a future date.

“There’s no such thing as walk-up and get a vaccination anywhere,” Hizzoner said. “We do not want long lines. We do not want people congregating anywhere.”

However, following the press conference, Annabel Palma, the chief equity officer for the city’s COVID-19 Test and Trace Corps, was seen telling a group of about eight people hoping to get inoculated that future appointments could not be made for them at the moment.

“We can’t register you because there aren’t vaccines,” Palma told the group in Spanish. “We aren’t going to give you an appointment if we don’t know for sure.”

Longtime Queens resident Felix Hojas, 69, then interjected that “the mayor is a liar or you are betraying us again.”

These poor people should be thrilled to know that Bill's tax boondoggle wife got inoculated the day before.

What an utter disgrace that putz of a mayor is to NYC. Anyone that voted for him should be permanently stripped of the right to vote.

Well, Americans should start to get used to being treated like Third World. One of the reasons they want to open the borders. So our new citizens can teach us about the new 'American' normal.

They had a photo op yesterday that undoubtedly cost thousands of taxpayers dollars to give out 200 shots. The elites in 3rd world countries do this all the time to bolster their image.

The Democratic Party is completely divorced from the real world.

appartments become availed much sooner,think about it?

“When the well is dry, we know the worth of water” - Benjamin Franklin

This is such a fucking disgrace. What's worst is that Mexicans who crossed over the border got vaccinated in the border states before elderly Americans have. This country especially this state should be ashamed of their poor ways. Screw the American people who need shots left and right. Who cares about giving these taxi drivers vaccines? I understand bus drivers but taxi drivers? Really? All they probably do is borrow their friends taxis and I bet you nobody is checking out to see if their taxi license registration matches the person even getting the shot. Probably not even checking work IDs or nothing. Why would you open up this much eligibility when you haven't even got it together with vaccinating the elderly first? They were a mess with the vaccination sites and appointments when they were only giving it out to the elderly and now its an even bigger mess. You know they only opened up the eligibility more because they realized that most of the elderly people in America happen to be white people. Then they cried "why are so many white people getting the shot?". Have you ever thought that its because its a fact that the whites have the oldest population in the nation compared to all other races? Thats all this whole thing was ever about. The "woke" revolution.

"What's worst is that Mexicans who crossed over the border"

Yep, they got free cash too.
A caravan of perhaps 100,000 of them may be coming in spring, you can bet our shots will be diverted to all of them. Its likely happening right now.
And if the New York state Legislature passes some kind of new sanctuary act (the news isn't covering) they will be coming HERE!
Bidon and the Democrats wasted no time.
This includes new guidelines to the city's Commission on Human Rights to make using terms like “illegal alien" or "illegals" within American city borders (like Queens) a felony with fines as high as $250,000.
Talk about your own elected white people beating you like a piñata !!

Nothing in this world will ever change for the better until people stop taking everything the media tells them at face value.

the media tells them at face value.

More like the media lies into their faces all day long about anything and anybody!