Let's go out to eat tonight 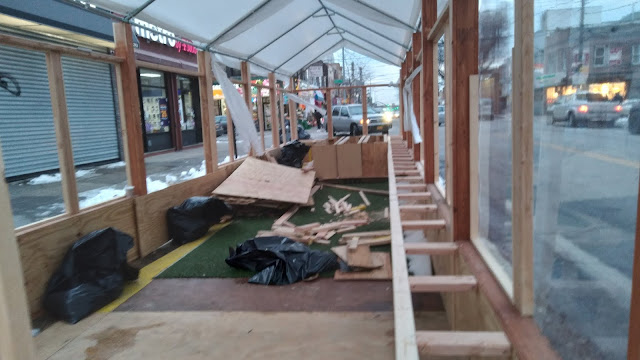 Patricia Robinson’s husband worked in Giordi’s Joint, a bar on Jamaica Avenue in Woodhaven, for 30 years before they bought the business in 2018.

“It’s been a rough winter, but we’re thrilled that we’re going to be reopening Friday,” she told the Chronicle.

New York City restaurants will be able to open indoor dining at 25 percent capacity on Friday rather than waiting until Valentine’s Day on Sunday, as Cuomo had initially announced. Cuomo, who last week hinted at the move based on any progress against Covid-19 over the weekend, made it official in his Monday morning press conference.

“We were planning to open the restaurants in New York City to indoor dining on Valentine’s Day, but they’ve made the point that they’d like to open a couple of days earlier so they can prepare for Valentine’s Day,” Cuomo said.

Among the numbers touted by the governor was a new seven-day positive testing rate of 4.38 percent in the state.

Queens, at 5.61 percent, has the second-highest rate in the five boroughs.

Cuomo said with Valentine’s Day expected to be a busy restaurant day, the two-day head start should help eateries do a little better. But he also said things could change back if the numbers take a turn for the worse.

“The future may change that,” Cuomo said. “If the enemy changes tactics, we have to change tactics.”

Loycent Gordon, owner of the historic Neir’s Tavern in Woodhaven, said the timing highlights what he calls a disconnect between Cuomo and the restaurant industry.

“He really needs to communicate more closely with the restaurant industry on ways to keep businesses viable and, of course, keep people safe,” Gordon said. “We’ve known from the start that indoor dining was not the source of the spreading. This is just one more thing we should have had already, one more frustration after a [Dec. 14] shutdown that never should have happened.”

Yeah this outdoor shed looks just like a restaurant. Is designed to break you will proles, because there is no difference otherwise eating inside or outside.
Virus freaks.

There's barely any decent places to eat in Queens anyway . The strong and well healed will survive. The ones with bad food and no money will fail.
Such is life.
Enjoy Queens.

Group Think said...
If anyone you know believes the demorats BS then you'd want to question their perception on.....everything! Including all info told about COVID-19 !
If you use Twitter you are apart of the problem.

There's barely any decent places to eat in Queens anyway .

So learn to cook and shut up.

"So learn to cook and shut up"

Exactly, during this pandemic disaster who in their right state of mind would want a restaurant staff of illegals handling their food, salads, cups, knives, forks, plates. One sneeze, one cough on anything and you have contamination.
Diners have no control over how things are handled (and by who) in restaurant's. I played in bands over the years, seen many kitchens and it isn't pretty.
That was years ago, and now its worse!!
All restaurants e one thing in common: The owners always complain they don't make enough money even when they are making killings.
They do things as cheap as possible. My favorite is the open 5 gallon paint buckets of cut potato's & French fry's soaking in water down in the cellars with the cockroaches & rats.

No thanks, I will never eat in a restaurant after what I seen in that field.
Its not hard to cook !!

Good points, but to be fair the city of NY under communist DeBlasio is using the restaurants like ATM machines. That "A" rating makes anyone feel safe?

Restaurants play a key role in money flow in Queens if you know what I mean.

You never see a politician concerned about anything unless it involves campaign cash donations or votes.

In case you are in a restaurant and you need to take the leftovers home, ask for the styrofoam container to be brought to your table so you alone can shovel the grub into it.