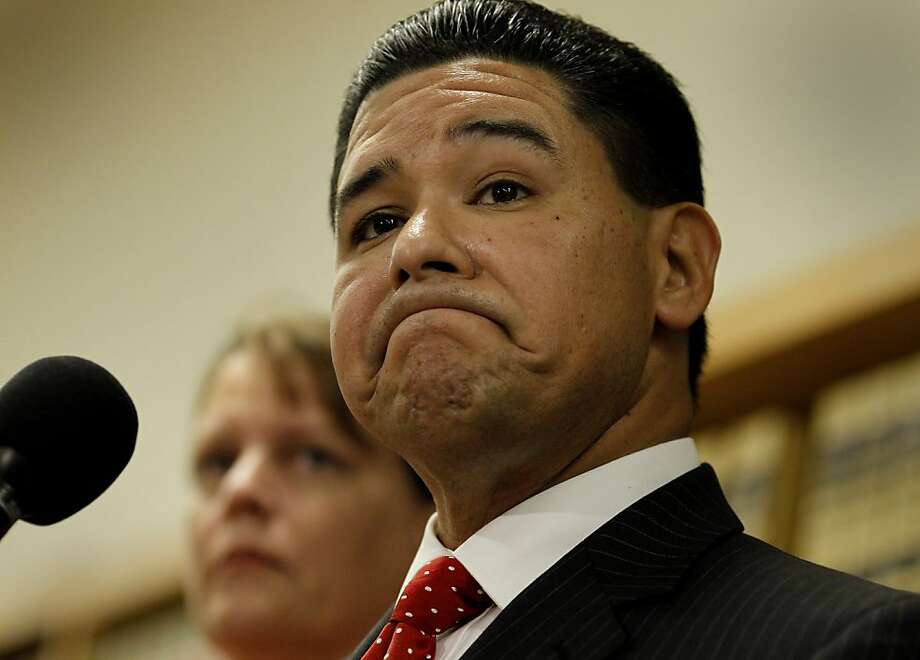 The leader of New York City's school system will step down amid the coronavirus pandemic and ongoing struggles to achieve equity in classrooms.

Chancellor Richard Carranza announced his resignation Friday after three years. He sat alongside Mayor Bill de Blasio and ticked off accomplishments in dismantling structures and policies of entrenched racism in the school system.

"I'm proud of what we've accomplished over the last three years," Carranza said.

Carranza cited the need to grieve many close to him who died during the coronavirus pandemic as his reason to leave.

"Make no mistake - I am a New Yorker, not by birth but by choice," he said, becoming visibly emotional. "A New Yorker who has lost 11 family members and close childhood friends to this pandemic. A New Yorker who needs to take time to grieve."

Meisha Ross Porter, a Bronx native who now leads its schools, will succeed Carranza. She will be the first Black woman to lead the city's school system — the largest in the country.

Porter has a long career within the city's schools. She said she'll never forget her own experience in classrooms and as a principal.

The New York Times first reported Carranza's resignation and highlighted growing tensions between him and de Blasio over integrating schools.

Carranza and de Blasio during their appearance together lavished warm praise on each other. But when asked point blank about reported differences over selective admissions programs and gifted and talented, Carranza largely sidestepped the question.

Instead, Carranza highlighted de Blasio's broad commitment to achieving equity in schools starting with the mayor's push for universal 3-K and pre-K.

Don't let the door hit you on the way out!

Meet the new Woke, same as the old Woke

This is a plus. Let's hope the next one knows what they're are doing. (Doubt it.)

The problem is not going away, He is getting replaced by a worst one - Meisha Ross Porter.God help NYC kids.

A better scam artist is on her way in -how much did she have to pay DeBlax to get the job?

One down more to come !

She didnt have to pay Deblasio anything. Her skin color is her ticket.

Parents. You want to educate your kids? Send your kids to Catholic schools.

The city schools are segregated because the neighborhoods are segregated. People tend to live near people like them. Most areas are dominated by one or two ethnic groups.

Yeah hiring someone solely based on their race or sex isn't exactly the smartest thing to do. Getting a job solely based on your race regardless of what race you are, IS racist. When will the dumbocrats learn this?

You must be living in the 1960-s somewhere in the South.

Yeah hiring someone solely based on their race or sex isn't exactly the smartest thing to do. Getting a job solely based on your race regardless of what race you are, IS racist. When will the dumbocrats learn this?

Shhh....Don’t tell Kamala Harris we’re on to her

Getting a job solely based on your race regardless of what race you are, IS racist.

Which brings up where is the EOC on all of this?

"Shhh....Don’t tell Kamala Harris we’re on to her"
What race is she claiming now ?

They should have thrown LaRaza Carranza out on his fat rear end years ago. He was not interested in making sure the kids of NYC got any sort of education except in radicalism, teaching them everything was "racist" as an excuse for their non-achievement, and persecuting people of ethnicities other than Hispanic or black. Now they have a female version of him waiting in the wings to replace him, someone very likely even worse with the "everything is racist" garbage and harassing people of groups other than black or Hispanic. I think NYC has gone too far down the garbage chute to attract someone with a brain instead of an attitude to be schools chancellor, especially when you have an ambulatory turd as mayor--who was voted in TWICE by the imbecile NYC voters. They get what they deserve, damning yet another generation of kids to be excuse-offering illiterates. Want your kid to have a good education? Home school them or send them to a parochial school. Keep the government's dirty indoctrinating hands off them.

Now the kids instead of saluting the flag, they will do the Wakanda salute.

"Keep the government's dirty indoctrinating hands off them."
I agree but we will be out numbered by the crazy lefty kids for generations to come.

Wakanda matter with you ?

You must be living in the 1960-s somewhere in the South.

Will he be taking his personal trainer and hairdresser with him?

"2021 NYC--open your eyes!"
They are open and I don't like what I see.
Wasting my Tax money on buses to segregate children is wrong.
All schools should be the same standard for all children !

Public School is caput. Home Schooling is the only way.
#DEFUNDTHEUFT

Teacher's unions have one job: to protect teachers and take as much money as possible from the local tax$laves. Most Teachers in the public schools believe in the 1619 project.

Moe said...
You should look into Thomas Sowell who documented that in 1940's when NYC public schools gave good education, white and black kids had virtually identical scores ! What happen ?

The owners decided education is no good, they need consumers. Then socialism kicked in via the indoctrination and re-education centers known as schools, universities and colleges.


A mental case, or what?

Adios La Rata LaRaza Carranza, you are a true idiot !

Glad I don’t have Children in this sick fallen World. Satan is going after them in indoctrination youth camps because they are most vulnerable.

My Two Cents said...
NYC Teachers have introduced Wokeness to make the our kids racists.
And Then They Came for Math ! The dumbing down of America continues at full speed with help from COVID-19 !
Cultural Marxism at its most vicious in full display in all Dem Cities.
Terms like: Equality = making everyone equally bad.
In a couple more years schools will only teach finger painting and the advanced classes will get to use glitter.
Funny how the WOKE Left Fascists don't remember the 3 Black Female Mathematicians who helped NASA to put men on the Moon.