This article was published in QNS and I couldn't help but chuckle at it. For example, here is a passage about the pictured business owner who was visited:

Lagos made some time, and spoke about the hardships of maintaining his business for what is nearly a year of the COVID-19 pandemic. Lagos, who noted Tasty’s has been in Ridgewood for 40 years, said not having indoor dining and getting “a bunch” of violations from the Department of Transportation for his outdoor setup are some of his biggest issues.

The response from the candidate during the listening tour?

When asked for his response to [incumbent Robert] Holden’s calls to open indoor dining to 50 percent capacity, Ardila said it’s “irresponsible.” Holden wants the governor to allow for the city’s restaurants to open indoor dining at the same capacity of Long Island, where there is a higher positivity rate of COVID-19 compared to the city, before more go out of business.

Sorry, Mr. Lagos, but Juan thinks you should just suck it up, because COVID spreads more in Queens restaurants than it does in Nassau County ones, or something like that.

Also interesting is the fact that the Tasty Diner is not in Council District 30. In reality, only about 3 blocks of the Ridgewood section of Myrtle Avenue are, and only on one side of the street. This diner is in Antonio Reynoso's district but he's too busy running for Brooklyn Borough President to care. 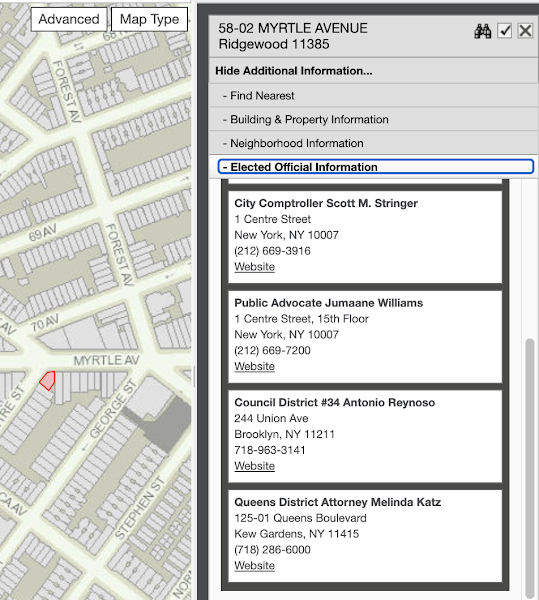 But do you know whose State Senate district this actually is? Not Jessica Ramos' but Michael Gianaris' who also endorsed this guy. Unfortunately, Mike sadly can't find anyplace outside of Astoria even if he uses Google Maps.

Keep voting for people who don't give a flying fig about you, because that's worked out well so far.
Posted by Queens Crapper at 7:24 AM


“When you become an elected official, you have to become an elected official for every single one of your neighbors — no matter who they are, no matter if they voted for you, no matter if they can vote,” Ramos said. “You cannot continue to ignore communities of color in your district. Especially when they’re going through possibly the biggest struggle they’ve ever gone through in their lives. We’re here to uplift communities of color. We’re here to uplift all working people. We’re here to make sure our seniors are protected and that our children have a brighter future ahead of them, where they see themselves in power, [and] so that other Juan Ardilas who are growing up in this district now see that it’s possible to lead their communities in the way that Juan is."

It's pretty and always cheap to race-bait, but conflating Ardilas with children growing up like he's some kind of civil rights leader is beyond farcical. And besides, Ramos needs to take a look around her district now and be concerned about her working POC constituents since rents have been going up there the past year.

"Working POC constituents"
The answer is Liberty and Freedom for all Americans!
Get off social media and get back to reality.

The propagandist's purpose is to make one set of people forget that certain other sets of people are human."
-Aldous Huxley

The race bait racism is so strong among the ideologues to the point where they’re effectively treating different races as different species !

Gotta love how progressives don’t progress anything and regress everything.

There are only two kinds of people. Dog people and cat people. So Get over it.

"Mike sadly can't find anyplace outside of Astoria even if he uses Google Maps."

Gianaris Couldn't find his own ass using both hands and a hunting dog.

The former Go-To Guy in Albany for the Astoria Boys and now the Woke Pol from Queens embraced by the New Left?

The Democratic Party, once the Party of Roosevelt and Kennedy and Johnson and Carter is now the Party the serves their own interests - the Liberal Elites - to the detriment of their communities and the nation.

They may look strong punching Trump and literally running riot across the country like the Bully Boys of the Old Fascists.

But all they have done is to make the country Woke. That is - Woke on the Right.

The Democratic Party is the party of the Confederates, Jim Crow, the Klan, Bull Connor, eugenicists like Woodrow Wilson and Margaret Sanger.
Fixed it for you

Holden is so bad, you could literally run anyone and I would vote against him. Maybe it's time he moves to his half-million dollar house in Florida and finally calls it a day.

No worries. Dominion will take care of the problem.

Holden is so bad ? Example please ...

Holden so bad. ....who made that comment. He is the best council member in the city. Coud this comment be from Juan Ardila.?

Holden so bad.
Lets not be so gullible, He stands alone in the City Council full of Crap !

Juan Ardila knows that he isn’t liked in the 30th, so he goes to a few businesses that don’t even know who he is and takes a few photos. Ramos and Ardila are bad news. The person above who said Holden is bad is either Ardila, or the rapist Dennis Gallagher who is probably now helping Ardila. You all know who to vote for in June, and that’s Holden, and only Holden.

P.S. Robert Holden is great and I hope he gets re-elected.