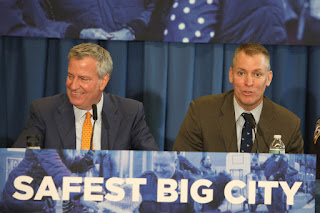 Mayor de Blasio on Thursday waved aside New Yorkers’ fears over a recent spate of shocking subway crimes — including the concerns of NYPD Commissioner Dermot Shea, claiming that the top cop never sounded the alarm, as he sat just feet away.

The denial of reality came in the wake of several high-profile crimes on the rails, including a straphanger being randomly shoved onto the tracks this week in what Shea said has become “too common” an occurrence.

Shea went on to say in a Wednesday NY1 interview that part of the problem was cops being restricted in interacting with the mentally ill in the subway system since the city’s push to use trained workers, not the Finest, for such calls — though not to de Blasio’s recollection.

“Any suggestion that the NYPD can’t do what it needs to do to stop an incident like that in the subways is absolutely false, and the commissioner never said that,” de Blasio chided CBS 2 reporter Marcia Kramer, who broached the subject during a City Hall briefing Thursday. “Don’t put words in his mouth, with all due respect.”

After a brief response from Shea — who did not address the mental illness issue, instead vowing increased NYPD visibility underground as a deterrent — Kramer fired back by directly quoting the commissioner’s Wednesday remarks.

“It’s not easy but we need to talk about it because, at the same time we’re saying, take the police out of mental health illness,” Shea said Wednesday. “In appropriate circumstances we support that, but there’s got to be follow up. This person is a danger, unfortunately, and he’s not alone.”

De Blasio then tried to dismiss the line of questioning as fearmongering.

“We can talk about facts and encourage the people to understand the facts, or we can just create fear for the sake of fear,” he said. “We choose the former. We choose to tell people that the NYPD is out there every day, protecting their safety, that subways have been made much safer over time.

THE biggest problem regarding mental illness isn't about any connection with subway crime but for what passes for a city council and mayor in NYC.

Shea has no self respect, he should have called out the mayor right then and there after the mayor implied that Marsha was lying. His silence is deafening and is another sign that he’s not a competent commissioner.

I thought the only crime being committed in the city is by the racist police harassing black and brown people.

THE biggest problem regarding mental illness isn't about any connection with subway crime but for what passes for a city council and mayor in NYC.

The Democratic Party better watch it. They are getting more and more divorced from reality as everyone sinks down into the gunk their policies made.

Who says nothing is impossible? Debosio has been doing nothing for years.

The Democratic Party better watch it. They are getting more and more divorced from reality as everyone sinks down into the gunk their policies made.

Why hasn't any reporters asked Deblasio where is the Help and where did all the money go if people and the homeless with mental problems are not being helped and treated?

The Media and the Press should callout the Mayor's "Do Nothing" mentality and tell and show him how crime has risen significantly in NYC over the past years since he has been in office.

Also, victims from these heinous crimes should continually confront the Mayor and tell him how violent NYC has become and his denial of reality has hurt them and how this is hurting innocent people everyday.

The mayor needs to be reminded everyday that his "lax" policies are hurting the working and innocent people of NYC, and these criminals should be taken off the streets and not be given a free pass to be freed and released back onto the streets to commit more violent acts again.

City council members should also be reminded too, since they don't do anything to address the problems with violent homeless people and the mentally ill either.

We should recall the City Council and Mayor in NYC.

Why should he care he has armed security 24/7 unlike most of the sheeple in NYC who are sitting ducks.

The city council and the mayor do nothing but show up to photo ops and press conferences. they are the very definition of looking busy

Real conservative said...
Why bow to the UFT and harm the NYPD ?
The teachers will consider going back to work after they’re back from their vacations in the Caribbean. In the meantime our kids are to read White Fragility and the Scum Manifesto.
The problem is too many of the good teachers won't stand up to the system because they don't want to risk losing their publicly funded pensions that are paid for by the parents of the children they are turning against this country.
Change my mind...

"Your mayor is named Bill DeBlasio" When will this nonsense end...
Has NYC become the Capital cesspit of corruption and dysfunction in America ?
He can’t even lie good and most New Yorker are divorced from reality.
Communism is the definition of failure !

The city council and the mayor do nothing but show up to photo ops and press conferences. they are the very definition of looking busy.

The arts community which sustains that real business of NYC, entertainment, is dying for lack of funds or support. And if they die, the city dies.

Meanwhile, all the arts fund goes to photo ops with targeted voting blocks. It's funny how no one thinks Bukarin folks songs and Ashanti dances or Andean folk singers can replace the old standards like Ibsen, Haydn, or Matisse ... except Democratic politicians fishing for votes.

Biden won't get this many tough questions his whole term .

So confusing because the left never makes shit up.

It’s so crazy how the real criminal holds the highest office in the USA.

Hitler made the trains run on time.
DeBlasio made dangerous lunatics run the trains
Thrive NYC-that what I be talking about! No work all pay!